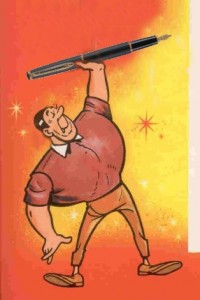 I do actually look something like this if I take off my glasses.

That would be me… because there’s no one else here.  My name is Dirck de Lint, and I am not a Dutch actor but rather Canadian fountain pen enthusiast with pretentions of academicism.  I’ve been using fountain pens almost exclusively since I first stumbled on them in my long ago school days.  Since the start of the millenium, I’ve been paying a little more attention to the actual study of pens, and the site is an effort to share the fruits of that study with the world.

For those interested in what sort of odd notions are drifting through my head on any given day, I keep up a blog; the main external point of it was initially to explain away the slow pace of updates to this site.  It developed into more of a stream-of-consciousness rant from someone trapped in a modernity he doesn’t entirely approve of with an internal purpose of keeping me from spending the mortgage money on eBay pens over lunch hours at my Regular Job, until I eventually realized that the same lunch hours could be devoted to the writing of fiction— yes, I have pretensions of being a writer in addition to the other mental aberrations that produce a site devoted to fountain pen history and maintenance.  I may also be found bellowing in a long-winded manner on the Fountain Pen Network (and some other and occasionally non-pen-related fora) under the assumed name of Ernst Bitterman.

Oh… lest anyone think I’m a raving egomanic from the URL, I’ll mention that my brother registered the family name some time ago to avoid the domain squatting that occasionally vexeth the innocent. He set up sub-domains for all the family members, and since it was just sitting there waiting to be used, I used it this way.

Permanent link to this article: http://dirck.delint.ca/beta/?page_id=4690