The Fall of Fountain Pens

In the comic books I spent so much time on as a child and still occasionally enjoy, I found a consistency in the really good villains.  They are men of parts, driven into the arms of evil either by external forces or a small character flaw magnified by the power of their intellect and personality.  Consider the following examples (and here I give away that I am more a DC than a Marvel man):

Why the excursion into comics?  Well, when I consider the career of Lászlo Jozsef Biró, I can’t help but think of these chaps– men whose gifts could have made the world a far better place, but who have been twisted into deeds of darkness.  Biró was not a typical model for lunatic polymath, inventing steam-driven laundry devices rather than giant mechanical squids, but he was faced with the sort of obstacle that a DC villain would recognize all too well.  Having invented an automatic transmission, he offered it to General Motors, which paid him an “advance” of $200 a month for five years and promised a barely-perceptible percentage of sales.  Sales there were none, since there was no obligation on GM to put the invention into production (at least, not until they’d “improved” it out of the original patent), and while $200 monthly is a pretty good pile of money in the 1920s or ’30s it’s not quite a slice of every sale made by GM.

Biró put his energies thereafter into perfecting a pen which could deliver printer’s ink to the hand-written page, giving a text not more given to smearing than newspapers.  Having found the mechanism to do so, he set up shop in Argentina (oddly finding life in Europe at the end of the 1930s somehow uncomfortable) and in 1941 he was producing the ball-point pen.

I settled on 1945, four years later, as the start of this period, for a couple of reasons.  Until then, the ball-point was seen, if seen at all, as a sort of specialist tool– the Royal Air Force was a major buyer, since the ball-point was less put out by variations of air pressure due to altitude change than fountain pens and less likely to need sharpening than a pencil.  The US Air Force was also interested in the pen, but since the notion of “Buy USA” has always been strong in that country they were hesitant to enter into a contract with a Hungarian expatriate in Argentina.  Biró’s pen was shown to US makers who were encouraged to do something similar.

1945 is also when Popular Science took notice of the thing, in the January issue. Note that in the pre-paradigm shift days, the thought of not refilling a pen never occurred (image courtesy of Modern Mechanix, who you will visit if you click this image).

One would like to think that the great fountain pen makers of the age would rise up to defend the old world from this distressing development, but realistically we must understand that they were not “fountain pen makers”, but rather “writing instrument makers.”  The general inadequacies of the ball-point were not manifest, there was a potential to add a new branch to an already profitable business, and it was in their ballpark– why wouldn’t they give it a try? 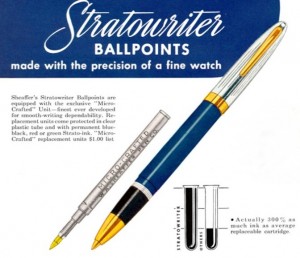 Note that the refill is worth $9.25 in modern terms.

1945, then,  is the year in which the first American pen maker, Reynolds, offered a ball-point of their own… which failed magnificently to work, but nonetheless sold a vast number of them before the poor reputation of their product sunk the company.  Eversharp actually paid a pile of money to Biró for a license, began production in later in 1945, did a poor job of making the pen and of suing Reynolds for their unlicenced version, and found themselves on the slide that would end up with the company leaving the writing instrument game entirely in 1957.  Sheaffer’s Stratowriter, not brought out until 1946, was not a company-killer, and Parker was apparently the smart one of the bunch, waiting until the initial reputation of ball-points was somewhat forgotten and they’d had time to perfect their own entry:  the Jotter, which with small amendments from its original 1954 design, is still in production.

There is, frankly, a lot of overlap between the coming of the ball-point and the Golden Age of fountain pens.  The latter part of the 1940s still saw a lot of extremely good pens made, but the changes in design as the century approached its second half reflect a change in popular tastes which the ball-point was much better suited to pounce upon.  People were, it seemed, unwilling to try as hard as they had previously; this was the beginning of the era of “push-button convenience”.  One might look to the recently-concluded war as part of the reason for this: those at war were certainly faced with substantial inconvenience, and those at home had had to work around rationing and other restrictions, all of which immediately following the Great Depression and its various make-shift demands, so when the possibility of convenience appeared it was seized with both hands. 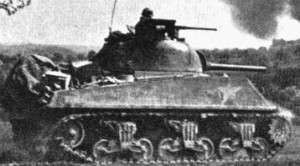 In the wake of the war, North America found itself without any serious external threats (the Soviet menace was a few years off) and an industrial base with the capacity to drown Hitler’s armies in cheap tanks.  The profligate use of “expendibles” during the war may well be the foundation of the throw-away attitude towards consumer goods which has only developed since then.  Fountain pens can be for a lifetime, but take a little care.  Ball-points, after the initial round when they cost as much as rather good fountain pens, are rather designed to not get attached to.  Even with those early expensive models, you were paying for the housing only– the business end was attached to the refill, and that was something you just threw away.

“So… that’s all there is to filling it?”

Convenience, then, was the growing watch-word in pen making, even though it was in some cases like trying to design a supersonic blimp.  Before the end of the 1940s, Parker developed what would become known as the Aerometric filler and Sheaffer would begin with its pneumatic fillers.  In the next decade, there was a sudden explosion of cartridge fillers from various manufacturers (Waterman got in first with the C/F, for all the good it did them).  The final attempt to entice consumers with simplicity beyond that offered by cartridges was a filler with no moving parts at all– the capillary filler, offered by Parker and Waterman, in which the pen is just dunked in ink for a short time, and which proved something of a blind alley.

The appearance of the plastic ink cartridge is, by the way, what a lot of people use to mark the boundary between “vintage” and “modern” pens.  I have mentioned earlier that an absolute boundary of this sort leads eventually to the need to speak of “post-modern” and even more hair-splitting titles, but I do agree that some extra note be taken of this entry of fountain pens into the field of having throw-away components.

Less shattering than the appearance of a competing species, but also not a great thing for the pen makers, was a 1945 ruling by the US Federal Trade Commission which put the brakes on the sort of warranties that the upper-end pen makers had been offering since Sheaffer had started talking about “lifetime” guarantees in 1920.  These warranties were not made illegal, but any costs to the consumer, like a “handling fee”, had to be presented in the same size of print as the enticing bits.  I’m actually in favour of this sort of governmental oversight of corporate advertising whimsy, but it did put a bit of a kink in the way the pen makers promoted their wares.  The terrible irony of this event is that the ruling appeared at just about the time that fountain pens were most likely to be able to live up to an extravagant warranty, with most of the serious points of failure either designed out or thoroughly tested for. 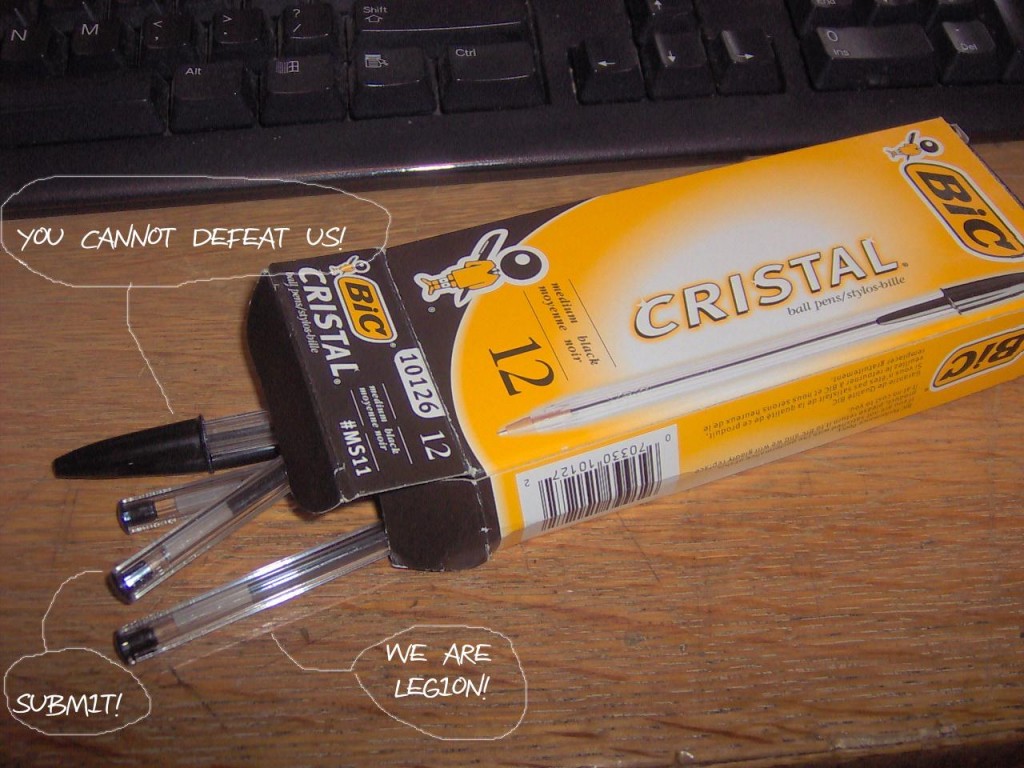 As the post-war era lengthened, fountain pens lost ever more ground to ball-points.  There is a graph of sales showing the two types’ sales on The Industrial Physicist (a graph I mean to refer to again later).  There’s an interesting little blip after the initial unappealing appearance of ball-points, but from 1959 or so there is a persistent fall in fountain pens mirrored by a rise in ballpoints.  That graph is actually a little misleading, as in making the apples-to-oranges comparision in disposable ball-points and clung-to fountain pens it has to use radically different scales to show overall trends in the same place– ballpoint sales actually began to outnumber fountain pens in the early 1950s, shortly after the appearance of the eminently disposable but relatively reliable Bic.  The great fountain pen makers seemed at something of a loss as to how to respond to this.  Lowering prices could only go so far before the whole prospect became unprofitable.  A slow turning away began, with the major pen makers starting the slow processes of abandoning fountain pens in much the same way aircraft makers had set aside biplanes– perhaps not ever to be quite done away with (one can still buy new biplanes and airships, after all), but certainly not the focus of the industry’s operations.

The 1950s and 1960s saw the fortunes of the old giants of pen making start to wane.  Waterman collapsed in the US, and but for a lively subsidiary in France would have vanished entirely.  Wahl sold the Eversharp name and operation to Parker.  What I view as the end of this twilight finally descended in 1966 when Sheaffer stopped being a family business.  The grandson of the company’s founder stepped down as president, and a few months later the enterprise was sold to Textron, a self-described “diversified manufacturer”, meaning they’d go for anything that made a buck, and the guys at the top would not necessarily know the particulars of any division’s specific business.  A pen maker had become a mere asset of a greater corporation which would not know nor care how to best chart its course– if that doesn’t sound like the start of an uncomfortable dark age, I don’t know what does.

The Shape of Things to Come….

Link to gallery of this era’s pens

Permanent link to this article: http://dirck.delint.ca/beta/?page_id=115