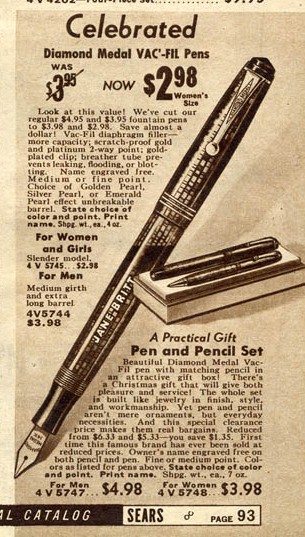 One of the Parker-made models, from the 1937 Sears Wish Book (courtesy www.wishbookweb.com)

Diamond Medal was the in-house pen brand of the Sears Roebuck & Company.  They were made by the National Pen Company starting in the 1920s into the mid-’30s, when the contract moved over to Parker.

It would, however, be incorrect to treat these pens as a sub-brand of either of those makers.  Diamond Medal should be considered in much the same way the modern Kenmore appliances or Craftsman tools, not made by Sears but only available from them.  Likewise, they are of at least slightly above-average quality, and all reports suggest that the finish and trim was equal to anything the makers behind them was willing to apply their own name to.

Permanent link to this article: http://dirck.delint.ca/beta/?page_id=897