Notice, if you will, the capitalization of this line: TipDip.  Sheaffer ad-men wanted to make sure that, at least in a subliminal way, people remembered the connection between these pens and the Touchdown line they were involved in ousting, which was contracted to “TD”.  If one examines the prices of the Thin Model pens before and after the switch-over to Snorkel fillers, there is a jump in prices that is almost astonishing.  This is understandable, given the amount of extra stuff inside the Snorkels and the amount of labour it took to cram it in.  However, it also meant that the lowest priced Snorkel was somewhat above the traditional popular point (which seems to be somewhere between a half- and a third-day’s pay at a rather crummy job), and without taking a bit of a bath on the profits that would remain the situation. 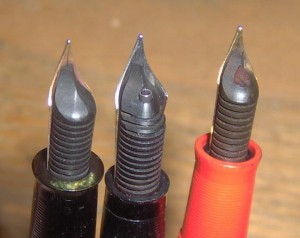 The TipDip addresses this problem.  The mechanism is, in general, the same as the Thin Model Touchdowns’, with the eponymous difference lying in the feed.  Where the Touchdowns had a traditional solid feed, the TipDips used a feed more like that on the Snorkel, with the passage for the probe plugged by a fixed version of the snorkels inner feed.  The difference in the configuration meant that as long as the point was submerged up to its breather hole, the pen could be filled; it apparently also meant that production costs were enough less that the pens could sell at the popular-market prices Sheaffer sought to offer.  For the user, while it was not quite as utterly wipe-free as the more expensive pens, a degree of tolerance for ink on the back of the point allowed for a fill without wiping (you can have a look at a PDF of the combined Snorkel/TipDip instruction leaflet).

The lower-end models borrowed a notion from the then-king of the popular pen, Esterbrook.  A variety of points were offered, easily swapped by the pen’s owner, a vast difference from the “no user serviceable parts” approach of the Snorkels.  Since the people these pens were being mainly marketed to, blue-collar workers and students, frequently found themselves in environments conducive to pen-dropping or inimical to pens in general, an easy repair was a very wise idea.

Speaking of the target market; there were more or less two models of TipDip available, the Cadet and the Craftsman.  The former had a plastic cap, rather like that on the contemporary Admiral, while the latter had an unbanded steel cap.  I say “more or less” because there was an up-scale version of the Cadet offered for a short time which mounted a gold point, quite similar to the Admiral or the TD Craftsman, but marked with a 23 point code.  Canadian and Australian versions of the line differ from the US production, in that the Craftsman appears to have gotten better treatment; it got an upgrade to the same gold furniture as the Snorkel Admiral and retained the number 33 gold point.

What did this line of pens in was the cartridge pen.  Even though the TipDips had simple inner workings, they had something, and the reduction in price on the production end that the elimination of almost everything inside the pen offered was eventually too great to resist.  The fact that the TipDip persisted so long after Sheaffer had sorted out cartridges is impressive.

Functionally, these pens are in keeping with Sheaffer’s low-end production, and that is not dismissive.  Firm and damp points, which is generally the case for Sheaffer pens regardless of cost, easy maintenance and use, and a reasonably robust frame all make for a pen that was well worth the low price paid.  Since these tend to sell at quite reasonable prices today, the same may be said in the present tense.

Cost When New: Cadet $3.95, Craftsman $4.00.  The Cadet 23 and gold-point foreign Craftsmen are of unknown cost, but would lie somewhere between these prices and the Snorkel Admiral’s $10.00 (for modern values, try this calculator).

Sheaffer Cadet, black, still bearing the original “chalk-mark”; if this pen were valuable, that evidence of little to no use would make this an expensive example.

Proof of the foolishness of saying anything absolute about Sheaffers. This is a Canadian-made Craftsman, in a colour that in the Snorkel charts would be Vermillion. The point is marked with a 33.

Permanent link to this article: http://dirck.delint.ca/beta/?page_id=3085