The button filler was an effort by Parker to get around Sheaffer’s lever filler patent, and in doing so they invented a filler popular enough to also have crowds of other makers preying upon their own patent.

A button filler is like a lever filler in that it works by compressing a sac with a metal bar, but it is unlike a lever filler in that the compression is indirect.  The button pushes down on a spring to which the bar is attached.  This causes the spring to bow, since the lower end of the spring is fixed, driving the bar sideways relative to the action of the button (there is a cutaway view below).

Parker’s repair manuals maintained that there were three forms of button filler, but that count is a little high.  One type has the spring’s inner end resting against either the inner face of the section or a little shelf worked into the inner wall of the barrel (Parker called this two kinds).  The other sees a third bit of metal involved, with a slot at the bottom for the spring to catch in and a perpendicular tab at the top that suspended the whole affair from the button hole; this allowed the use of simple friction-fit sections, avoiding the manufacturing difficulty of machining a shelf or threads for the section.

The button itself is mounted in the tail of the pen, protected by a blind cap.  This is one of the drawbacks of this sort of filler, in that there is an extra part drifting around during the filling process.  That drawback is balanced by the relative ease of working the mechanism one-handed, as it only takes one finger to mash the button.  One of the few decided advantages of the button over the lever filler is that there is essentially no danger of accidental working of the mechanism.

A button filler will fail in much the same way as a lever filler. If the sac loses its resiliency, and it can tear or rupture when compressed, and this can put some ink in the barrel with the various metal parts of the mechanism.  Those then begin to corrode, and since the spring of the pressure bar is relatively thin metal, corrosion is a very bad deal indeed.  One is less likely to damage the mechanism of a button filler by trying to work it with a hard sac in place, but if the button resists more than a little, don’t try to force it. 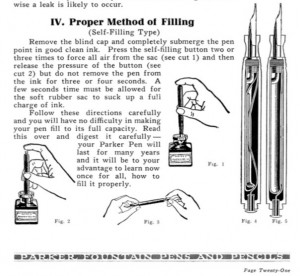 Permanent link to this article: http://dirck.delint.ca/beta/?page_id=377