This procedure is only indicated it there’s something authentically wrong with the mechanism itself.  Generally speaking, the replacement of the sac cures the woes of a malfunct lever filler.  Only if an inspection of the mechanism in situ shows something alarming (sac turned to tar!), or if something drops out unexpectedly, should this be undertaken.  There are, in fact, several sub-procedures that might be necessary.

Drawing and replacing a J-bar: A corroded J-bar is the usual reason for needing to do any of this, and it is a reasonably easy exercise with the right tool.  The right tool is a thin, grabby instrument like a hemostat, or rather small needle-nose pliers.  With the majority of sprung lever-fillers, gripping the nearest edge of the bar and pulling is all that’s needed to get the bar out.  However, this is not universally true, which is why it’s a good idea to have a look down the barrel with a small flashlight (small so it can be seen around) to get an idea of what’s down there.  Some models will have little shelves or tabs for the short end of the J to rest against, and in that case some twisting may be needed.  As little twisting as possible, as the ideal situation is to re-use the original part, or at least use it as a template for a replacement.

This bar’s long arm is likely TOO long; look how close to the top of the barrel the end lies.

Once the bar is out, it may be possible to clean it up with sandpaper and return it to service.  If not, a replacement will need finding– a more thoroughly broken pen can be scavenged or a new part ordered.  Unless the part comes from the very same model of pen, it is likely to need some adjustments to lie properly in the barrel, and this is where keeping the extracted part is useful.  The main points to watch for are the allowable lengths of the J’s uprights and the shape of the curve.  The former has to do with fitting in the space allowed and not tearing the sac off the nipple, while the latter dictates how the long member of the J rests against the inside of the the barrel.  Don’t over-widen the curve, since even if the bar continues to lie flush against the barrel wall, the extra spring pressure will put stress on the lever in use which may damage it or your finger.  If an over-long replacement bar needs trimming, remember to smooth the cuts with an emery board; if it seems rough to you, the sac won’t like it.  A very little bit of silicon grease rubbed all about the bar will help to resist future rust.

Replacing the bar is relatively easy.  Hold the lever down with a finger and slide the bar into the barrel.  The hemostat can be used for this, or a dowel can be used to push against the J’s curve.  Just be careful that the long arm of the bar is centered relative to the lever.  Test it a couple of times before replacing the section to make sure everything goes up and down properly, and give the sac a little refreshing of talc prior to reinstalling the section.

Drawing and replacing a Waterman-type hanging bar: This is something I encourage even less than pulling out a J-bar.  In this set-up, the bar just hangs off a couple of little tabs at the interior end of the lever, and while it’s mainly a Waterman item, I have seen it in a couple of other makes.  In point of fact, the main reason for one of this kind of bar coming out is that it accidentally slides free of the lever when one is shaking out bits of old sac. 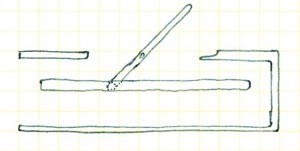 Without a sac in place, this mechanism will tend to droop into the barrel

Should it be for some reason necessary to remove this sort of bar, the first thing to try is gravity.  Lift the lever a little, just enough to let the bar hang free of the barrel, and then tip the barrel tail-upward.  Don’t let the lever rise too high, as the tabs will bind on the inside of the bar’s rails.  If the bar doesn’t just slide out suddenly, it can get gripped with a hemostat and pulled out, but carefully: those tabs are tiny and fragile, and breaking them is a just cause for tears.  If the bar doesn’t want to come out and the only reason for taking it out is curiousity, I urge leaving curiousity unsatisfied.

Getting the bar back in is reasonably easy.  The primary complication is keeping track of front and back, and this can be discovered by comparing the location of the rails to the location of the lever, laying the bar beside the pen.  Once that is sorted, take a grip on the fore-end of the bar with the forceps, slightly raise the lever, and slide the bar onto the tabs.  Gently, of course, and be guided by both feel and what can be seen through the lever slot.  Be prepared to have several attempts at getting everything lined up, and remember to keep the barrel tail-down once the bar is back in.  Once the section is back on, it will keep the bar from sliding too far forward.

Fresh talc on the sac prior to refitting the section is a nice idea, too.

The early Sheaffer mechanism had the pressure bar mounted on a ring.  The ring snapped into a space at the tail of the barrel.  In attempting to get it out, one is attempting to jolly a 70+ year old mass of metal fatigue into sliding out of a place it was designed to remain permanently within.  It’s not impossible, in the absolute sense of the word, but the chances of success are hard to express.  So… don’t.

If, however, the bar is already corroded to the point of uselessness, and further destruction won’t make it any less useful, then it’s just a matter of grappling the remaining fragments out of the barrel with foreceps.  On a very early model, that barrel is made of hard rubber, so adjust your power-use accordingly.

Once the parts are out, and that terminal ring is apt to remain down there, one installs a standard J-bar following those directions.

Removing and replacing a ring-mounted lever: Think very seriously about this.  There are very few reasons to want to do this, and fewer valid ones; satisfaction of curiosity isn’t one of the latter.  The ring itself being corroded and likely to fall to bits spontaneously is the main reason to want to do this, and in those cases it’s often quite easy.  After removing the j-bar (which is apt to be in some trouble as well), just lift the lever a little, push it inward, and listen for the tiny ‘crack’ as the ring shatters into rusty fragments.

If the j-bar and ring are not corroded, the first step is to really, deeply reconsider if this step is necessary.  If you still think it is, I’m going to say you should re-read my general repairs page, and buy the books I recommend there; the wait for the book to arrive may see further reconsideration, and if not you will have detailed instructions far better than you’ll find here.

If the original ring is no longer useable, fabricate a new one.  I have had some success with “memory wire” which some craft-jewellers use; unlike the regular beading wire, it has some snap to it and will hold position.  Be careful that the diameter of the new ring closely matches the interior diameter of the pen.  If it is substantially too large, the pressure it exerts on the barrel will deform the plastic eventually.  Also make sure that there is a gap in its circumference to allow it to compress easily while sliding into place; it should look like a C rather than an O.  Slip the ring into the mounting holes on the lever.  Depending on the shape of the lever, it may be possible to re-insert the assembly through the slot in the barrel; slip the ring and the pressing end of the lever into the barrel, then rotate the whole affair to get the ring aligned with its groove.  If the lever is too wide to allow this move, the assembly has to be slipped in from the front of the barrel, with a very slender grabbing tool (like a hemostat) holding the pressing end of the lever.  In either case, some sort of probe will be needed to help cajole the ring into its groove.

Removing and replacing a pin-mounted lever: This is at once a more straightforward task than removing a ring-lever and a more terrifying one.  All that needs to be done to accomplish it is to support the barrel on something while using a very tiny drift, like a sewing pin with the point ground flat, to force out the little metal pin which the lever hangs from.  The terror comes from the prospect of losing the pin and the possibility of tearing out the thin stratum of barrel that holds it in place.  To reduce the chances of the latter, either remove the J-bar, or insert a dowel at the top of the barrel to hold the bar down; this removes the pressure on the lever, such as it is, which keeps it shut.

See the tiny little holes indicated by the arrows? That’s the pin that keeps the lever in place.

Replacing the lever (and one assumes if this is a necessary activity, the lever itself needing to be replaced and a replacement already found) is a similar blend of misery and ease.  With the J-bar out of the way, slide the lever into the slot until the holes in it lines up with the holes in the barrel, and fix it in place with the little pin.  It may be necessary to tap in the pin using the drift from the removal, a process that begins to demand more than two hands.  Once the pin is where it belongs, close the lever and let the pressure bar up to contact it; even if the process opened the holes in the barrel a little, the pressure from the bar should keep the pin in place.

Removing and replacing a Waterman lever-box: Don’t.  They’re a low-grade nightmare, and the attempt is apt to end in damage.  If you find yourself facing a broken lever box, it’s time to defer to a professional.  This is a repair I generally decline to perform for lack of parts. A similar mechanism appears in some Conway-Stewart pens and a few other makes.

Permanent link to this article: http://dirck.delint.ca/beta/?page_id=683