It’s the last eight words that make the passage (for a full PDF of the leaflet, click on image)

When these appeared in the 1950s in their final and finally functional form (earlier glass efforts were not very successful), various makers likened the action of refilling your pen to that of recharging a firearm– take out the spent cartridge, put in a new one, and you’re back in business.  Given the fact that the Second World War was only a decade or so in the past, this analogy is to be expected.

Filling a cartridge pen is pretty simple, although there are a few little points to be aware of.  First, you need to make sure your cartridge is compatible with the pen– if you’ve gotten the pen second-hand, you may not have an exemplar on hand.  I’ve got a bit of a rogue’s gallery of cartridges here– it’s not exhaustive, but it should help you get on.

Once you’ve got the right sort of cartridge, there are two ways to mate it to the receiving nipple in the back of the section.  Many cartridge pens are arranged to have the cartridge dropped into the barrel, and then the section screws down onto it– it is the act of screwing the pen back together that pierces the cartridge. 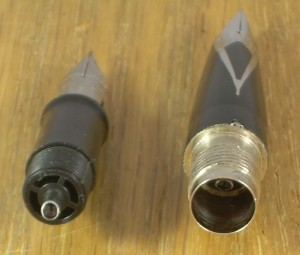 Some pens, however, seem better suited to have the cartridge inserted into the back of the section before re-uniting with the barrel.  I suggest trying the previous method first, and if you discover the cartridge isn’t punctured, try this– put the cartridge base down on a firm surface, like a table-top, then press the section down onto it.  There is usually a little popping sensation when the job is done, but if there isn’t remember that this isn’t meant to be difficult– don’t use a vast amount of force, or you may collapse the cartridge and face an ugly clean-up job.

There are some drawbacks to using cartridges.  The first is that it costs rather more per volume of ink than does using a bottle to fill from.  Closely associated is the fact that you’re limited to whatever the manufacturer puts in the cartridge.  This is less of an issue if your pen supports international cartridges, since you then have the vast spectrum of Herbin, Private Reserve and Diamine to look through, but if you’ve got a proprietary cartridge you’re somewhat stuck.  The solution is to either use a converter, or refill emptied cartridges with a small syringe (ask nicely for an insulin syringe at the drugstore, or seek out a cartridge refilling kit for either fountain pens or inkjet printers).  Some people swear by this last method, but even with my own devotion to patience I find I more often swear at it, particularly when it’s time to rinse out the cartridge.

The other big problem is discovering that the required cartridge for your pen is no longer made.  The previous solutions can be pursued (if you don’t have an empty, begging about at collectors’ online forums can frequently provide), and if there are no metal parts that wouldn’t normally be exposed to ink inside the pen, you can try it as an eyedropper pen. 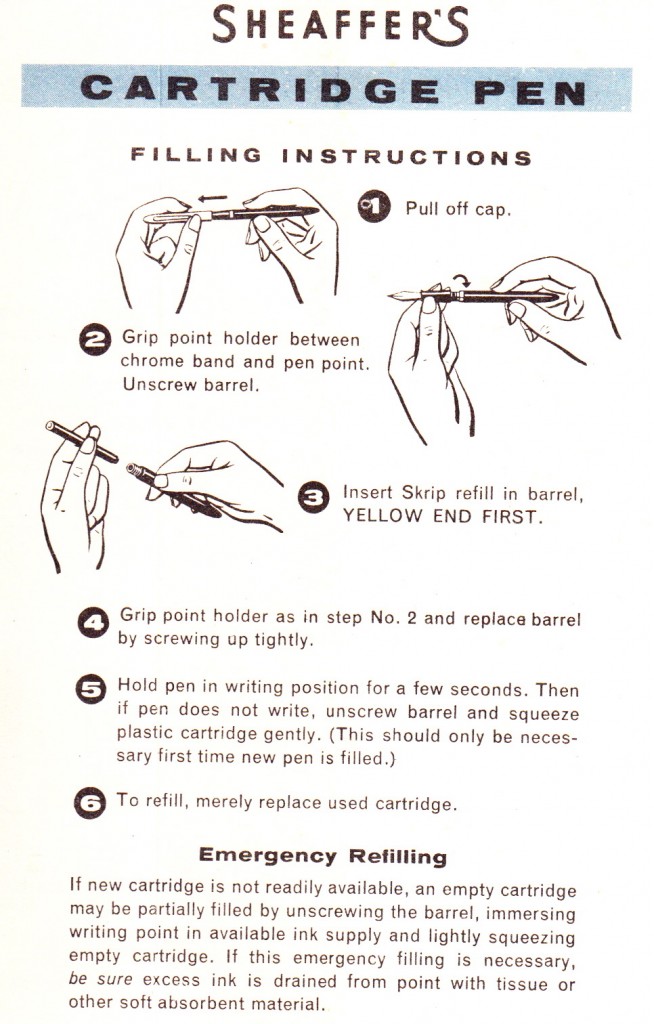 Below is a chart I’ve made up that more or less gives a sense of which brands of cartridges will fit in which brands of pens.  It is not, and probably never will be, 100% inclusive of all brands of both items, but it may help if you’re concerned about whether you should stuff a given cartridge into a pen.  This chart can also be seen at Google Docs via this link, which I actually suggest because the indices of the unembedded version are fixed, making it a little easier to read.

Permanent link to this article: http://dirck.delint.ca/beta/?page_id=310