While not the first reliably-working mechanism for filling a pen, the lever was the right combination of features to make it very popular.  Those features are a reasonably efficient fill, an easy-to-master operation, a lack of dismantling to operate, and a smooth barrel profile when at rest (one of the few points that puts it ahead of the crescent filler, in fact).  The basic defining feature of the system is a lever is set into a slot cut into the pen’s barrel.  In the earliest versions, the pivot for the lever was a simple pin driven through the material of the barrel; this was later replaced by a ring, as it was found the pin created stresses in the barrel which sometimes led to it ripping free.

There are two different types of lever filler.    The less popular, used mainly by Waterman, was unsprung– the lever presses down on a fairly simple retangular bar to compress a sac, and relies on the resiliency of the sac and the user’s own initiative to return the lever to its resting position.  In the Waterman set-up, the lever was attached to a little frame (a “lever-box”) which had little grippers to hold the lever in when not in use, and also eliminated the troubling pin.  It also provided the lever with small tabs which slid into little rails on the bar, ensuring that the bar would follow the lever.  Some makers had a rather more primitive and thus less reliable arrangement.

The more popular lever fillers were based on a bar which was under tension and so naturally rested against the inside of the barrel.  In the original Sheaffer patent, this tension was provided by fitting the bar to a ring which was thrust into the bottom of the barrel (and which is a blighter to get out again at repair time) but the arrangement which even Sheaffer eventually went to used a “j-bar” to provide the spring pressure.

With a sprung bar, the lever is held in rest position firmly.  This acts as a safety against an accidental working, although it does take somewhat more effort to fill the pen– not a big deal, unless you’re filling and emptying repeatedly to clean the pen.  It also makes for slightly easier operation if one finds it necessary to tip the bottle to provide sufficient depth of filling, as it’s a simple matter of letting go of the lever rather than helping it back to its starting position. 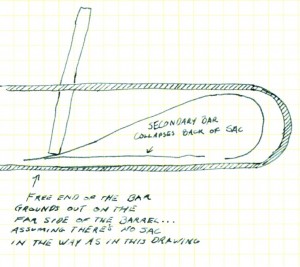 You can imagine how ineffecient the single-stage bar might be

The problem with a sprung bar is one of efficient compression of the sac.  With the unsprung bar, there is a simple potato-masher effect, but a sprung bar has a pivot at the back of the barrel, which in cheap pens means there’s a little pocket at the end of the sac which gets no pressure.  Higher-class spung levers as in the picture above have a two-part bar, a secondary pivot-point, and thus full sac compression.

The main disadvantages to the lever filler are not operational, although filling is a little awkward in the bottle-tilting scenario mentioned above regardless of whether the bar has a spring or not.  Rather, the problems lie in maintenance.  As the sac ages, it loses its resiliency (particularly if ink is left to dry in it repeatedly), and it can then tear or rupture when compressed, and this can put some ink in the barrel with the various metal parts of the mechanism.  Those then begin to corrode and the whole affair can fall to bits… although it usually doesn’t get that bad.

When presented with a lever filler of unknown state of repair, it is best to try the action of the filler very cautiously.  Even if the metal components aren’t corroded, the sac may have gone hard, and it is easy to break something by making too vigourous an attempt to overcome a resistant sac.  Easy to break, but not so easy to replace.

The operational problem with a lever pen is that the lever is hanging out in the world, and can snag on the top of a pocket as the pen is put into it for carrying.  That produces a cap full of ink and, if one doesn’t notice it when it happens, an alarming mess when the cap comes off.  This is a relatively rare event, and all the moreso if one is aware of it as a possibility and takes some care when pocketing a pen.

Permanent link to this article: http://dirck.delint.ca/beta/?page_id=354