An inelegant way of referring to an extremely varied assortment of fillers.  The only difference between all of these and press-bar fillers is that one doesn’t actually stick a finger into the pen– there is a protrusion or separate element which transmits the force to the bar.  This is an extremely artificial distinction, and if there were not an extremely successful filler that fits this description, I would have just said something on the press-bar page about, “Oh, and there’s all these that work about the same.”

The filler in question is the crescent, introduced by Conklin.  The crescent filler is illustrative of most of the principles which I feel define this sort of filler, if “define” is allowable for something so amorphous.  There is a pressure bar internal to the barrel.  There is a… thing… attached to the pressure bar which transmits whatever effort the user applies.  There is (usually) a means of preventing the thing from working unintentionally. 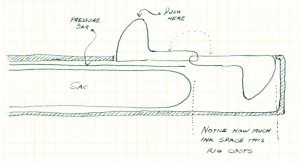 Hatchet filler: most of us won't ever actually see one of these in person

In Conklin’s case, the thing in question was the crescent itself, and the preventative a locking ring that held the crescent up unless rotated to a clearly open position, but after Conklin showed the world the way there were plenty of other more or less similar set-ups in the world.  There were hump fillers (described elsewhere) with their inversion of the crescent’s layout, matchstick fillers in which the thing was a simple protruding button, hatchet fillers with a strange concealed pendulum doo-dad one might take for a lever on first glance.

There are a couple of this broad family of fillers in which the thing is not actually attached to the pen.  I mention matchstick fillers previously, but that was a bit of a mis-use; in its truest incarnation, a matchstick filler just has a little hole in the pen into which one pokes a narrow probe of some sort.  In the day of these pens, wooden matches were fairly ubiquitous, and that tended to be the probe of choice and thus the name.  There were also coin fillers, which have a slot rather than a hole, into which one thrusts a coin; some makers supplied a token of some sort (possibly in hopes that the owner would misplace it in a public place and thus engage in early viral marketing).  These latter look very like lever fillers from which the lever has vanished, and indeed this is an easy conversion when the lever or its suspender is damaged beyond repair in that sort of pen.

The main advantage to this sort of filler is the simplicity.  There is little to break or lose, coins aside, and in several cases the external part of the mechanism acts to preserve the pen from rolling off a desk (something Mark Twain commented upon in the case of the Conklins).  The latter item may count for some as equally a disadvantage, as the external parts can annoy some more sensitive folks by rubbing against the hand.  The other balancing point to this simplicity is that it was sometimes viewed as an invitation to extra economy– I’ve been unpleasantly surprised at how malleable the bar in my Evans Dollar Pen is.

Loading One of These Things Step by Step (this is as inspecific as the category itself– I assume if you’ve got one of these you’ve the imagination to fill in the details):

Permanent link to this article: http://dirck.delint.ca/beta/?page_id=442