Skrip is Sheaffer’s house brand of ink, although I may be admonished for using that word.  When first brought out, Skrip’s full name was “Skrip Writing Fluid, the Successor to Ink,” to differentiate it from actual, old school acid’n’iron ink.  Since pretty much every fountain pen ink now available is a variation on the aniline dye that Skrip was so proud of being, I’m going to stick with “ink”. 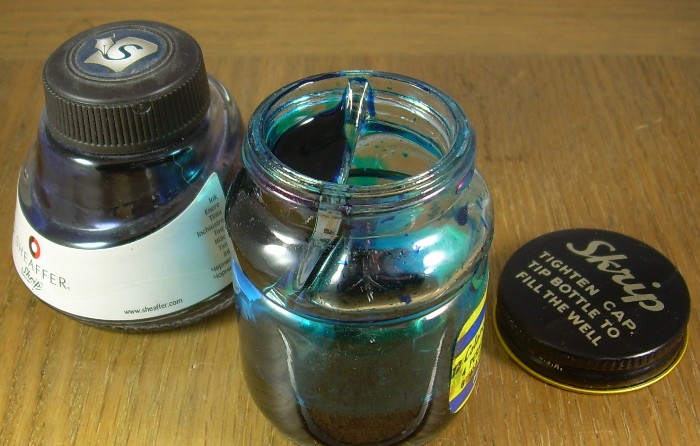 Modern and previous Skrip bottles. I’ve filled the well so it is more obvious.

No look at Skrip is complete without a mention of the bottle.  The modern bottle is a squat cone, which can be held up on edge to exaggerate the depth of the ink.  The older “Skrip-well” bottles, though, were a bit of an engineering marvel, with a little trough inside the mouth of the cylindrical barrel which held enough ink to submerge a pen point (if it wasn’t too huge) with sufficient extra to actually go into the reservoir.  The angle of it is such that the modern bottle can replicate the effect if held with the bottom perpendicular to a table-top, but the chances of spilling with the modern bottle are vastly greater.  It is fairly common to cling to these bottles to pour new ink from less useful bottles into.

Skrip has always been a decent, tractable general-use ink, and while some traditionalists lament the fact that production currently comes out of Slovakia I don’t see any serious flaws in the modern ink’s function.

This is a reconstituted ink – I added some distilled water to a bottle that had gone rather syrupy, and the paleness may result from getting the proportions wrong.

Jet Black (vintage): “Contains RC-35” says the box.  Unlike a lot of additives, the RC-35 doesn’t claim to help keep the pen clean, but rather to render a permanent mark on the page that resists efforts to alter a document.  The problem with this is it only shows up under UV light (or so it claims; I’ve not tried it), so you’d need to be suspicious and have a UV light handy.  With the references to “new” Snorkels on the bottle I’ve got, it can’t be any older than 1958.

Blue:  A pleasant enough mid-blue, with a tendency to fading common in this colour.

Blue-black:  Like many blue-blacks, it frequently comes across as more of a grey.  It is a little more consistent in is colour than the very similar Pelikan ink of this colour, and that consistency retains more of a blue note.

Blue-black (semi-vintage):  As with pens, one has a little trouble working out the exact border of Vintageland; the markings on the bottle this ink lives in puts it between 1967 and 1974.  It is a little closer to the old Quink formulation, with a somewhat greenish undertone and rather more blueness than the modern Skrip version of the colour, but is less given to fading than the modern Quink and Waterman colours.

Turquoise: Similar to the old Skrip “Peacock Blue”, a very bright colour.  As a frequent user of Peacock Blue during my primary school years, I feel I owe my teachers an apology for what it must have done to their eyes.

Red: I really like Skrip red; it’s a very true red, falling right between “bright” and “deep”.  The one problem with it is one most reds share; a habit of gumming up the pen with sediment.

King’s Gold: A discontinued colour; I won’t say “vintage” as it was available until at least the late 1980s.  There is a subtle brown undertone to it my scanner refuses to believe in; those who remember appliances of the 1970s will think of “Harvest Gold” as a similar colour.  Update— through the strange eddies of the internet, I discover that this ink is a dead wringer for orpiment, one of the ferociously toxic pigments artists used to expose themselves to with regularity.  Orpiment is also known as “king’s yellow”.

Brown: This is a semi-vintage version of the colour, coming from a mid- to late-1980s package, but the modern version is much the same.

Permanent link to this article: http://dirck.delint.ca/beta/?page_id=4062