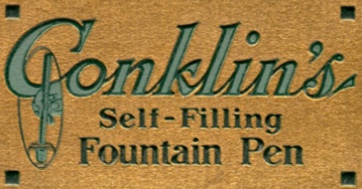 Roy Conklin had previously headed another pen company, but upon working out his crescent filler he restarted the business under his own name.  Production on this new self-filling pen appeared in 1898, and it met with great success– a functional self-filler pen in an environment primarily containing eyedroppers with a leavening of more decorative than operational filling mechanisms is bound to make a splash.  Indeed, the humourist Mark Twain was a great fan of Conklin pens and featured substantially in their advertising.

The success of Conklin seems to have led to their eventual downfall, as the company was, in much the same way as Waterman, not quick to update their ways.  The crescent filler remained the company’s mainstay until 1931, when they had a sudden spasm of creativity in the shape of the Nozac, a piston-filling pen.  There was a flourish of variations (again, not unlike Waterman in its final decade), which saw a “Word Gauge” printed on the side, a plunger filler not unlike Sheaffer’s, and a startling array of colours– none of which saved the company.

Conklin was sold to a group of investors in 1938 which was not, alas, particularly interested in pens (this was a very early example of the sort of corporate juggling-ball effect that became common at the end of the century).  Production was moved from Toledo to Chicago, quality fell off increasingly as stocks of old parts were used up, and in 1955 the company was wound up.

The reputation of the name, however, moved another group of investors to resurrect the marque in the year 2000.  These latter-day Conklins seem to have been mainly aimed at the growing collector market, although the turn of the century interest in things retro likely also played a role.  Their line-up included the usual modern cartridge-filling pens, but also actual crescent-fillers and a short-lived re-creation of the Word Gauge.  In 2009, the new Conklin was bought by Yafa, which is something of a conglomerate but which is also entirely engaged in writing instruments– thus far, apart from some reports of difficulty with warranties on pre-buyout pens, the change in ownership has done Conklin far less harm than the one in the ’30s.

As an aside, Conklin was in its original incarnation noted for some strange and whimiscal phonetic spelling in relation to its product line– the sacless Nozac, the Balance-emulating Symetrik, and the pleasant-writing Cushon point were all under their trademark.

Permanent link to this article: http://dirck.delint.ca/beta/?page_id=260