The Vector is a development of a short-lived model called the FP1, which appeared in 1984 as a counterpart to the RB1 rollerball (one of which may be seen in Crispin Glover’s hand during the family dinner scene in the early part of Back to the Future).  The Vector is shorter in the cap and longer in the body than the previous model.

Like its progenitor, the Vector is a low-end pen aimed at a mass market, and is probably more analogous to things like the Lamy Safari and the Pelikano than the Reflex.  The common plastic-bodied version comes in an apparent infinity of decorations, with themes from sports, comics and films; if you want a Harry Potter fountain pen, you’re looking for a Vector.  There are also steel-bodied variants in line with the company’s long-standing “Flighter”, and Parker has decided that there should now be a “Premium” line with highly-polished metal bodies.  An italic-pointed calligraphy set was available in the past.

The Vector is a very simple design.  The body and cap are simple tubes, held together by the section when in carriage or an insert in the tail when in use.  The design is also seen in 88/Rialto, which is really just an upgraded version of the Vector.  Unless one is extremely moved by, say, a Batman logo, it’s not a particularly exciting pen, but it is reliable and functional; a good knock-around pen.  The one great functional failing of the pen is the large and sharply-defined step from joint to barrel.   This step allows the cap and barrel to be flush with one another, but it can act as an irritant of the fingers when the pen is in use.

Cost When New: Initially started at about $8.  One can find them new for $15 to $25 today, although the current “Premium” trim is being offered at premium prices.

Filler: Cartridge, capacity approx. 1.2 ml.  It can accept only the narrower sorts of converter (numbers 4, 5, and 6 in the Parker illustration on the converter page).

Parker Vector steel body. This one is from 1996.

Capped, to show the tail-piece; “posting” the cap is very literal with these pens. 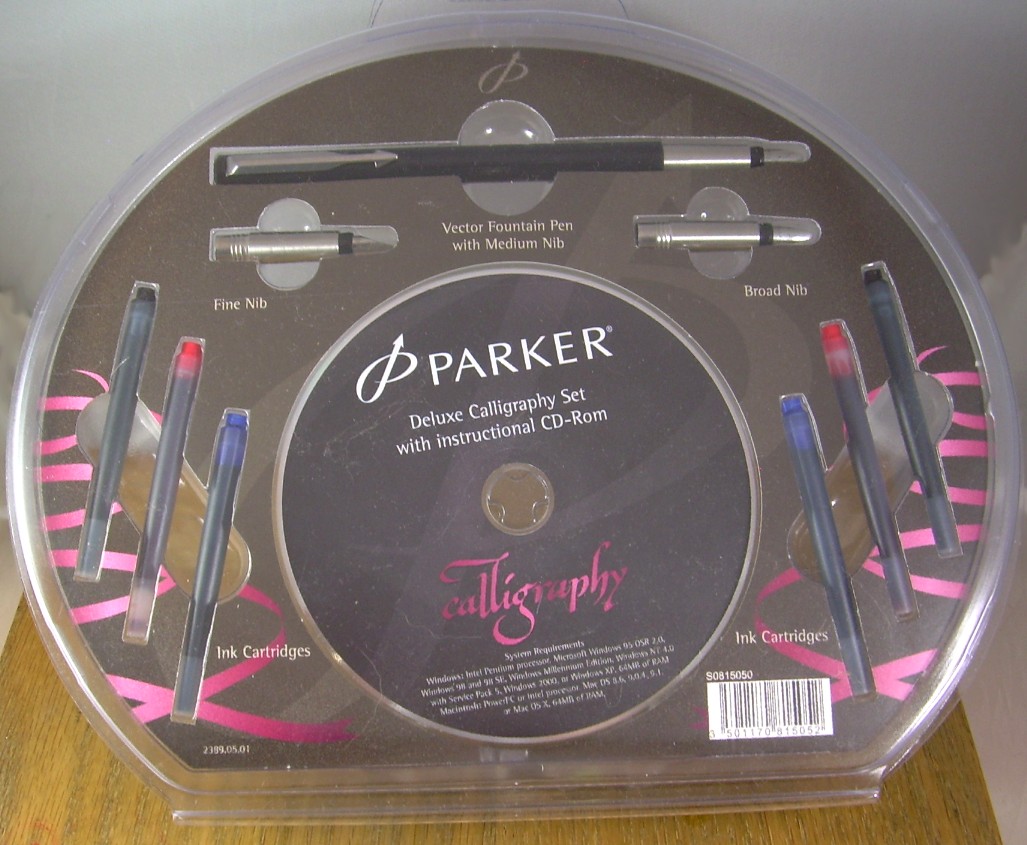 A late-model Vector calligraphy set. The CD contains a PDF of a basic calligraphy booklet.

Permanent link to this article: http://dirck.delint.ca/beta/?page_id=4938