This pen is a very odd thing in several ways.  For a start, it came into being after the company had given up on US production, and so all examples of it were made at the French factory regardless of the amount of English in the impression.  This, however, is a lesser oddity compared to the fact that it is a capillary-filler.

As the bows of Waterman’s ship of commerce gradually slipped towards the waves and the propellers began to show above the surface, the company was casting about for the thing that would provide the miraculous recovery which the C/F had failed to provide.  The company apparently saw Parker’s new capillary-filling 61 as the sort of appeal to convenience that could save them, and sprang this little number on the world. 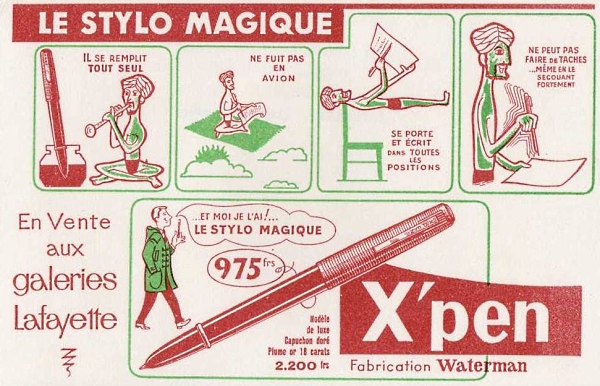 An advertising blotter suggests the many “magical” virtues of this, and indeed all, capillary pens; ease of filling, fearless airborne writing, no care about “point down”, and impossibility of blotting. All of which are true, except possibly the last one (thanks to Forum Styloplume for putting me onto this apparently public-domain image).

We might be forgiven for mistaking it for a Parker, given the way the front end looks; except up close and in rather good light, it is very difficult to tell the X-Pen from a Parker “51”.  That front end is where the action is, and I think may be part of the reason that this pen did not save the company, at least in its American incarnation.  Want to write?  Apply the front end to some paper.  Want to fill?  Apply the front end to some ink.  This is a sealed unit, with a slot for the point and a little hole in the forward face of the section to admit ink to the fabric reservoir.  It is as simple a creature as a fountain pen can well be, but there is a definite problem produced by that simplicity– you can’t clean the thing.

The Parker 61 at least allows access to the back of the reservoir, and one can with a little bit of special equipment force a lot of water through it to eventually clear trapped ink.  While “sealed” is not quite right, as there’s a couple of little vent holes toward the tail (it was pointed out to me by a wiser pen-man that even capillary-fillers need air exchange if ink is to flow), there’s really no way to get fluid of any sort into the X-Pen other than by the same hole it comes out of, rendering cleaning a very gentle and slightly useless process.  I suspect that these same vents will allow the pen to dry out if left out of use too long– not something that pen designers of the time were very worried about, but certainly replacing the inconvenience of the various other modes of refilling with that of slavishly regular feedings.

Apart from the difficulty in cleaning, which also afflicted the 61 but not to an evidently fatal degree, is the look of the thing.  Even if it were The Best Pen Ever Made in terms of convenience and function, it looked almost exactly like a pen that had been around for over fifteen years, and was at that time the second-best in the rankings of the company which made it.  It would be a while before a prospective buyer realized the pen was nigh-impossible to clean, but it was blatantly a cycle of fashion behind just sitting there on the shelf; the Parker “51” has aged gracefully, but the late 1950s had no notion of “retro” and very low regard for “old fashioned” (unless they meant the cocktail).

The timing of the pen’s release meant that these handicaps were probably not significant in the case of Waterman in the US.  Many cures rely on timeliness, after all, and administering them just as all the patient’s organs fail doesn’t really turn the tide.  The X-Pen was released to the world the same year that Waterman gave up the ghost in North America, and it may thus remain a bit of an open question whether its brief run was a result of the deficiencies I’ve mentioned or was just a matter of Waterman-JiF not wanting to get any of the death-stink that clung to it on themselves.

Cost When New: The blotter shows 975 Franc, which is roughly equivalent to 14s. 1d. in England (for modern value, try this calculator) or $1.98 in the US (for which you’ll want this other calculator); the top-end model indicated, at 2,200 Fr  (£1 11s. 10d. or about $4.50US), which is a bargain in anyone’s book (note; for a short time on 27 September 2012, I had some extremely errant numbers here, as I was unclear about the 1960 revaluation of the franc.  I apologize for the stupidity, and I hope it’s not out getting expanded upon somewhere).

Filler: Capillary, capacity of the Junior model approx. 0.7 ml (this is likely to be very low, possibly as much as half the true value, as it was got by filling the pen with water and then forcing out as much as could be done by a combination of huffing and puffing into the vent holes and centripedal force; there was almost certainly some fluid remaining within). With the Super(?), I was able to get at the capillary unit itself, and dribbling in water to saturation gave a capacity of 1.5 ml; this is probably high, as in use full saturation is probably not achievable.

Waterman X-Pen Junior in burgundy.  It’s not a notably small pen, and the name is more an indication of the humble steel point it mounts.

Waterman X-Pen, which by the length of the section and shape of the clip is probably a late Super X-Pen, although the impression says only “X-Pen”.

Permanent link to this article: http://dirck.delint.ca/beta/?page_id=3569