One of Stipula’s most affordable models, the Passaporto is also a very tiny object that might be mistaken for lipstick or mascara.  The likelihood of error increases when the pen is found in one of the places suggested for its transportation; a purse.  Many clipless pens are suggested as aimed at the female side of the pen-buying world, but as with previous vest/chatelaine pens or the Tuckaway line from Sheaffer, there is no outright injunction against male ownership nor use, and when the cap is posted the pen is certainly large enough for even those with somewhat above-average hands to use without difficulty.

An interesting aspect of the Passaporto is that it was designed from the start to accept cartridges or to be eyedropper filled, the latter to the extent that Stipula actually includes an eyedropper in the packaging.  As opposed to eyedropper conversions, this pen has all the seals necessary for the comfort and safety of the user’s pocket built into it.  It is also, given its overall dimensions, surprisingly capacious as an eyedropper.

If seeking fault with the Passaporto, I have to look once again at the size of the pen.  While the example I have has a small but sufficient set of threads at the tail to hold the cap firmly in place while the pen is in use, there are versions of it in the world without these threads.  Posting then becomes reliant upon friction, and friction is not always a reliable helper in such matters.  From what I can gather, the unthreaded versions are newer, and if that’s the case this may be an exercise in cost-saving.  As the Passaporto is a low-end model, such an exercise is understandable, but I find it slightly depressing.

Production Run: 2010 to present; there was some speculation in various fora that the clip-bearing Bon Voyage would push this model aside, but as of this writing (early 2013) both are still in Stipula’s on-line catalogue.

Stipula Passaporto in Azurite resin; there is a little bit of light marbling, honest.

With the cap on, the Passaporto is extremely easy to conceal about your person. It is also apt to be mistaken for some kind of cosmetic product. This example was part of a special run done for the Fountain Pen Network (which is not THAT big a deal). 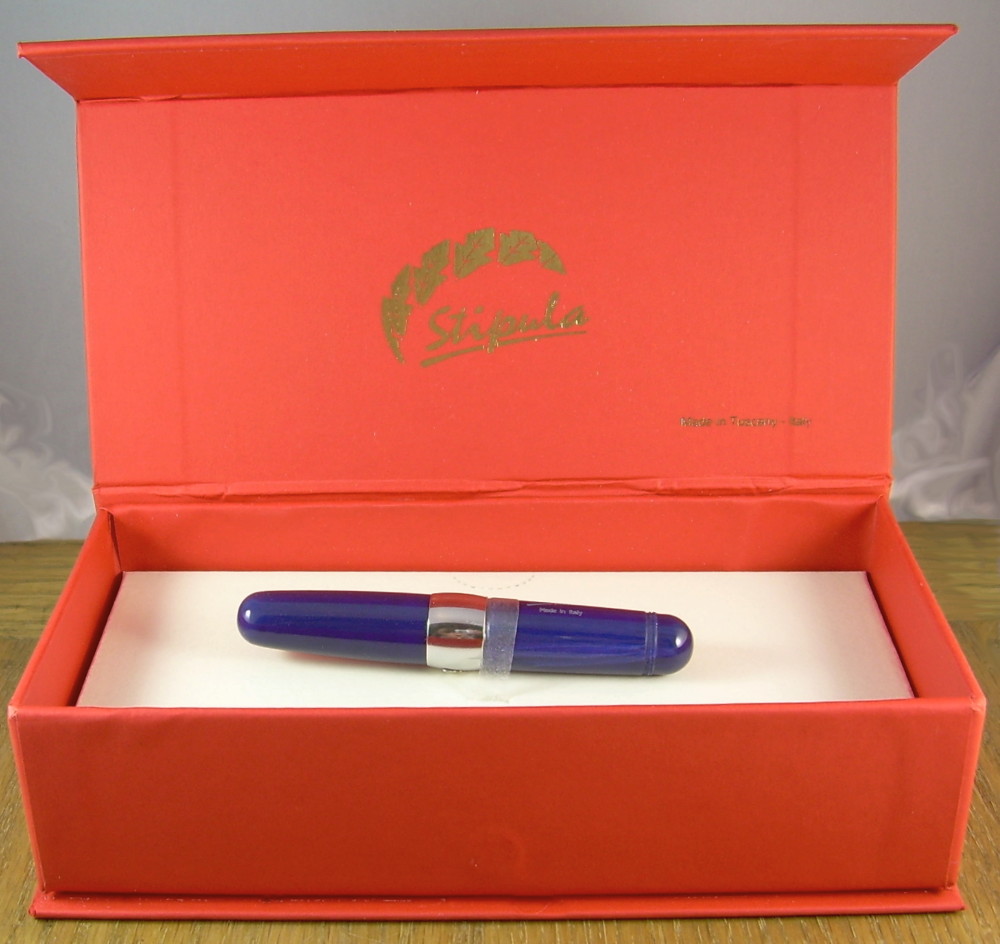 A lot of box for a tiny pen. The understory contains a lot of paperwork and a complementary dropper for filling.

Permanent link to this article: http://dirck.delint.ca/beta/?page_id=6623