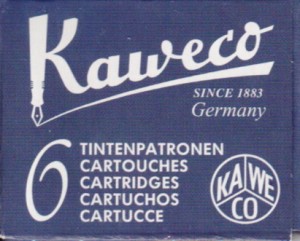 It’s not “pretty” as such, but it has the harmonic of nostalgia.

Beyond mentioning their existence, I have little to offer on the topic of Kaweco’s inks, although this acknowledgement of their being is slightly more than one will find on the company’s own website at the moment (February 2013).  It seems that to Kaweco, the ink is a very mere adjunct to the pen, and given how much competition one sees in the area of international short cartridges, it’s hard to condemn this attitude.  However, I will lament it slightly, as I think the packaging for the cartridges is rather charming and should be celebrated a little.  Were I a betting man, I would wager that Kaweco’s ink is made by an outside firm, although the parent company’s long-time involvement as the sort of outside firm providing parts for other brands gives me a slight hesitation over the amount of that wager.

Blue: A standard blue, and really, really nothing to get excited about in terms of colour; it’s not quite as vivid in person as in this scan.  It’s quite well-behaved in its performance, though.

Blue-black: About as standard as the blue, and similarly decent in its on-paper qualities.

Permanent link to this article: http://dirck.delint.ca/beta/?page_id=6691