I find it useful, when starting to addess the repair of a pen, to know what I’m going to find inside it.  In this sort of enterprise, surprises are unwelcome.  I have here a quantity of pens stripped down if not to their basic parts then at least as far as was required to repair and cleaning.  I’ll update this page now and again as new subjects hit the table.

Clicking on the image will get you a full-sized educational exploded view of the pen.  The name beside the image is a link to the page for that model. 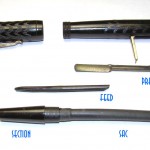 Byers & Hayes Pencil-Quill : A relatively early and primitive lever-filler.  The feed is interesting, being an over-feed of archaic sort. 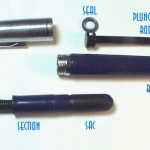 Esterbrook Safari: A slightly unusual pneumatic filler; the chap who rendered it into this state notes that to do so, he had to break the glued connection between plunger rod and blind cap, and seriously urges against trying this for yourself, as the mechanism is extremely durable.   (Image courtesy of Paul Hoban) 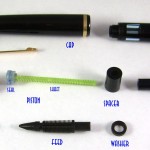 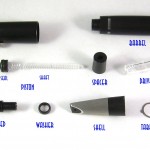 Lamy 2000: A slightly more modern piston filler, but usefully compared to the 99. 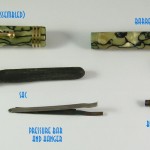 Parker Duofold:  This one is at the moment before reassembly, and I offer it to show the remarkably simplicity of the button filling system.  This one, with the hanger for the pressure bar, has one more part than the bare minimum. 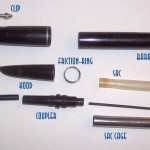 Parker “17”: A press-bar filler (but not an Aerometric) which is worth comparing to the insides of the “51”. This one had been filled with India ink at one point, and a combination of luck and skill (mainly the former) saw it back to work. 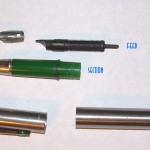 Parker 25: A fine demonstration of how little there is to the inside of a modern cartridge filler.  The only reason I pulled it this far apart was that the point was somewhat deformed and the feed was crunchy with ink. 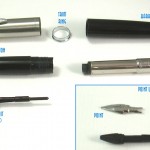 Parker 45: For a modern cartridge filler pen, which the 45 really is despite its early inception date, this breaks down into a surprising number of pieces.  For those seeking details on the cap’s innards, the 45 page of Pen Collect has a good view. 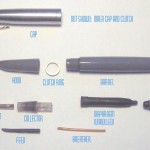 Parker “51”: The original Vacumatic version, which cannot have it’s filler removed without a specialized tool. Update— the full-size picture now includes a completely dismantled cap; this requires a second specialized too. 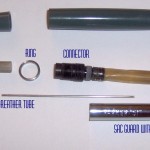 Parker “51”: the owner of the name “Aerometric filler” thanks to an invisible (in this picture) vent in the front end of the breather tube. 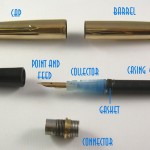 Parker 61: A capillary filler, and I don’t recommend taking it even this far apart if you don’t absolutely have to; the threaded collar that holds it all together is rather sharp-edged and quite willing to strip off the teflon on the capsule, and the whole thing is a bit of a devil to put back together.  I read of extreme fragility in the collector, as well, and there are serious injunctions about not trying to get it free of the capsule.

Parker Vacumatic filler:  I had to take one apart to fabricate a new pellet cup.  Had to.  This is mainly educational, and should not be attempted unless the pellet cup is already broken. 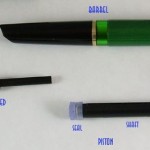 Pelikan MK10 (the inward anatomy of all the “New Pelikans” is identical):  A fairly standard piston filler; it is possible also to separate the barrel at the gold ring, but defeating the sealant requires patience and application of gentle heat.  The reason I had this apart was to lubricate the piston, and if you find you have to dismantle it, you’ll need a spanner slightly larger than that which TWSBI hands out, and also the mental dexterity to handle reverse threads.

Pelikan P25:  This image is given to my by the person who sold me the pen, and they were firm about not wanting citation on it.  It is a straightforward cartridge filler, included here for an oddly long feed and a frankly bizarre unified barrel/section.  Removal of the feed is best accomplished with a specialized threaded tool, of which very few examples exist. 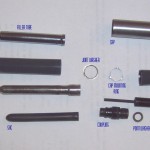 Sheaffer Imperial II:  A Touchdown filler with a slightly unusual section.  I don’t really encourage pulling the section to bits like this unless driven by need, as it’s a bit of a bear to get re-sealed. 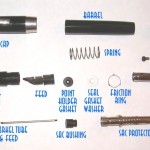 Sheaffer PFM I: The second sort of Snorkel filler, and one which unfortunately requires the section to be taken right apart to replace seals. I notice belatedly that I left the sac out of this picture; it it, despite its absence, rather important to the function of the pen. 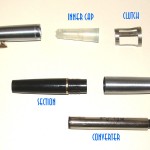 Sheaffer Stylist: Despite the odd front end, it’s a pretty plain cartridge filler.  The cap is dismantled to an unusual degree as it arrived in my hands with the clutch in the wrong way up.  I should mention that I’ve arranged the picture incorrectly; if you are taking this apart (which needs a special tool), the feed comes out the back of the section. 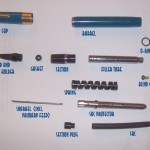 Sheaffer Valiant:  From the earlier Thin Model line of Snorkel fillers. There is usually no need to dismount the point from the feed like I’ve done here; mine was loose when I got it. 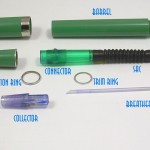 Soyuz “51” look-alike, which is an accordion-filler.  It’s not very difficult to take apart to this point, but be aware that the connector is counter-threaded, so loosening the hood is tightening the barrel and vice versa; with the barrel having the non-standard thread to it. 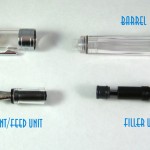 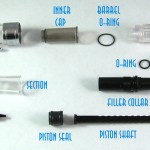 TWSBI Diamond:  I have two pictures of this modern piston-filler.  It is meant to be quite user-serviceable, and the first picture shows the main components an average person might take the pen into for basic maintenance, like applying lubrication to the piston seal.  The second shows a nearly-complete tear-down (I lacked the narrow 5mm nut-driver to pull apart the cap entirely), which isn’t really something most people want to attempt.  I particularly suggest against taking the filler unit down to its components, as it can be a little tricky getting everything realigned properly. 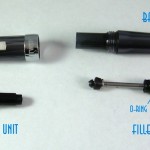 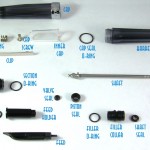 TWSBI Vac: As with the Diamond, I have the normal person’s version for the tear-down of this unusual vacuum-filler, and the raving tinkerer’s version.  You really don’t need to take apart the pen beyond the first version, and pulling the filler to bits requires a special tool.  If you do take it completely apart, be very careful with the easily-lost hinge pin.  I’m encouraged by the relative (to the Sheaffers of the 1930s and ’40s) ease of replacing the shaft seal. 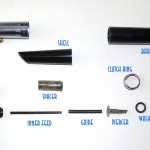 Waterman C/C: An early form of cartridge filler, usefully compared with the next item.  It is oddly complicated for was was a student pen. 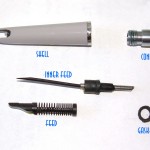 Waterman C/F: The original modern cartridge filler.  In later models, there are some more parts involved, which are concerned with retaining the cap.  Go carefully, as some of those parts are very easily lost ball bearings.

Waterman Taperite:  Just the section, and just for comparison’s sake with the under-hood complexity of the Parker “51” above– this is really just an old-fashioned feed  in a rather zippily-shaped section.  It is also VERY HARD to knock that feed out without a special rest for the section.

Waterman X-Pen:  This is a late version of Waterman’s capillary pen, so if you’ve got an early one the innards are a little different.  This one actually was already loose when I got it, and I don’t really encourage the taking apart of this model.  Curious to see what’s inside?  Well, here’s a picture so you don’t have to bust yours!  I did not pull out the point, nor the wick that moves ink to it from the capillary unit, because the risk of causing damage was greater than my urge to show the world these parts.

Permanent link to this article: http://dirck.delint.ca/beta/?page_id=304