The VPs design can be seen as addressing several diverse issues.  There was a perceived gap in degree of quality in the jump from the 45 to the “51”, and a new pen that was pretty good and somewhat at the high end of popular pricing had room to live between those models.  There was the on-going search for the ballpoint-defying convenient filler; that which lives in the VP is an interesting attempt, and I’ll look at with some care in a little bit down the page.  A more prominent goal of Parker’s design team was the comfort of the user.

Prior to the VP’s appearance, there was a certain amount of lip-service paid to the notion of ergonomics, usually in the directions of how well the pen sat in one’s hand or how effortlessly it got ink onto the page.  The VP’s design, though, actually takes account of the way fingers and pen interact.  Abandoning the generally cylindrical shape which sections had hitherto used, the VP’s section has a cross-section shaped like a curved triangle, providing lands for the three fingers which ideally should be in contact with the pen.

While this arrangement appears in a more forceful expression in some German pens, in the VP it is an invitation rather than a command.  However gentle it might be, though, the section does tend to enforce a specific “Up” onto the pen, which prevents rolling the whole instrument to find the most comfortable angle.  To address this, the mounting of the point is rather different from previous pens.  The point and feed are screwed into an internal ink collector, and these components spin relative to the section, so the point is still able to roll even if the body of the pen remains in a relatively rigid relationship to page and hand.  With some registration marks on the section and an indicator on the back of the point, one could determine the best alignment and repeat it– “Two hashes starboard of centreline!”–  and fifteen different grinds of point, we find the source of the pen’s name.  VP stands for “very personal”, you see, and it was suggested that anyone trying this pen could not help but fall in love with the way it felt, even including left-handed folks.

All this innovation was definitely to the good, and it all outlived the VP by decades, going on to appear in the better-received Parker 75.  The external looks of the VP are hard to fault, too, with a subtle tail jewel adding some interest once it’s noticed, the rather organic shape of the section, and the large external point making a nice change from the ranks of hoods Parker had been employing in growing numbers since 1941.  From an external viewpoint, the VP should have been a great pen.

Internally, though, we find that Achilles heel, in the form of the Clean Filler.  When the VP was introduced, Parker had three different filling systems already on the go: the low-end cartridge/converter set-up of the 45, the slightly elderly Aerometric in the “51” and the capillary capsule of the 61.  None of these had quite hit the perfect note of utter convenience the that age called for, and so Parker invented yet another filler, called the Clean Filler.  Unlike the “51” and 61, which still saw a large element of the pen stuck in the ink, in this new design the whole filler dismounted from the back of the section to reveal a long plastic probe.  The filler was otherwise very like that on the “51”, a press-bar arrangement with a breather tube, and once it was filled in the familiar manner, it was thrust back into the back of the section and away one went.

There were two problems with the Clean Filler.  The one which tends to attract attention is that it represents yet another manifestation of the curse which Parker suffered under until the early 1970s regarding new materials, which had been biting them ever since the choice of plastic for the 21.  That long plastic probe was a rather fragile item, and the hurried, increasingly distracted pen user of the 1960s didn’t have the time to be careful in remounting the filler in the section.  They broke in droves, and with the exception of a brief flirtation with them in 1967 they were abolished with the discontinuation of the VP, which discontinuation they are generally credited with.

The other problem with this filler is one which most people don’t comment on, as the disastrous fragility seems bad enough.  Even if that handicap had not existed, I don’t think the Clean Filler would have had a long nor distinguished run.  It had but two virtues, in that it didn’t call for the whole section to be submerged in ink with the slightly messy wiping that entails and it was quite good at extracting the very last drop from the far corner of an ink bottle.  These were somewhat overshadowed by the fact that it brought with it the vices of converters without also bringing all the benefits of those devices.  To fill the pen, it had to be taken apart right down to its component parts, and this plus the rebuilding rather undoes the convenience of not wiping.  While it looks like a converter, and is frequently even called a converter, the Clean Filler is not one.  A converter allows a cartridge pen to fill from a bottle.  The Clean Filler has no cartridge option, and those who are fans of cartridges will mention that one of the primary advantages of those items it the ability to carry a refill in almost all situations.  A VP still calls for an ink bottle.

Laying aside the misery of the ill-considered filler, the VP is still a rather nice pen.  The 75 is essentially the VP with the filler problem addressed, and it lasted for decades.  When a VP is in fit shape to write, it is as much a joy as the advertising suggested.  The point mounting is a little looser than in a 75, but still not enough to lead to unbidden rotation while in use, and it is mainly a concern while the filler is out.  The VP is not quite the absolute delight to hold that I suspect Parker was aiming for, but it is quite comfortable.  The close relation of the Parker 75 to this pen means one seeking the experience of using a VP need not seek out one of the few that were made, but can simulate it with the far more numerous (if somewhat smaller) cartridge-filling successor.

Parker VP, with the slightly less flashy cap; there was also a gold-filled variation. I’m just as happy to own this sort, as I quite like the gold-over-lustraloy look.

Detail of the section, showing the point-adjustment indicators. What isn’t showing up, I’m pleased to say, is the 25mm long crack that yawned in the barrel when I got it. 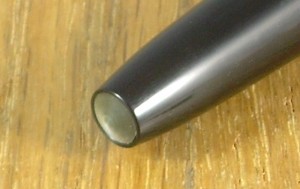 I thought I’d include a look at the usually unseen tail jewel; no tassie!

Here’s that Clean Filler you’ve heard so much about. This one has survived long enough to have its sac, originally clear, stained black.

Permanent link to this article: http://dirck.delint.ca/beta/?page_id=5672