I am cheating a little with this pen, as it is not by any means a fountain pen.  It is one of several late examples offered by major pen makers of an attempt to perfect the dip pen.  Esterbrook is an obvious candidate for this sort of exercise, given their long history of dip pen production, but I have examples of a roughly contemporary “Desk Well” from Sheaffer, and Parker offered a “Guardsman” dip station in the 1950s or ’60s.  Such things were extremely common in the 1940s and prior, frequently seen with a tall reservoir functioning in much the same way as a long-term pet-watering device one might find in stores currently.

I have to admit that I slightly distrust those tall reservoirs, with their column of ink above the outlet.  This well, however, is one I have perfect faith in, as the ink remains below the level of the pen itself.  While there is no mechanism as such involved in this pen, there is a little capsule full of hard rubber rods providing capillary action to allow the ink to come above the the level of the reservoir.  The point of the pen thrusts in amongst these rods, and the ink travels right up it to the inner end of the feed.

The feed, by the way, is unlike that in a fountain pen as it lacks the air exchange channels.  In earlier forms of the “Dip Less” pen, the feed and point were held in place by a little lever, while later models were threaded in such a way that the “Re-New” line of points for fountain pens could also be used.  The main difference between these two styles of point and feed, apart from the presence of the all-important channel in the fountain pen models, is that the Dip-Less points and feeds are held together by the barrel while the Re-New points are a unit held together by a threaded collar.

There are various shapes to these wells, although they are generally called “Hockey Pucks”.  Some of the variation depends on the purpose to which it was to be put, with twin-well models and public-use versions having the pen chained to the well.  There is also variation depending on age, with the earlier models having a domed prominence for the socket (this form was appearing in adverts as late as 1955), while later ones have an oval depression.  Esterbrook suggested them for home use in their advertising, touting a great resistance to spillage; this is true, since the black lid acts as a firm stopper, and when inverted the holes at the base of the capillary unit would rest above the level of the ink.

Body: Celluloid in earlier models, Polystyrene in later ones.

The holder for the 444 with a pen mounted (to scale with other portraits). This is referred to in some materials as a Model X; there is also a Model XX which is wider and longer in the barrel. 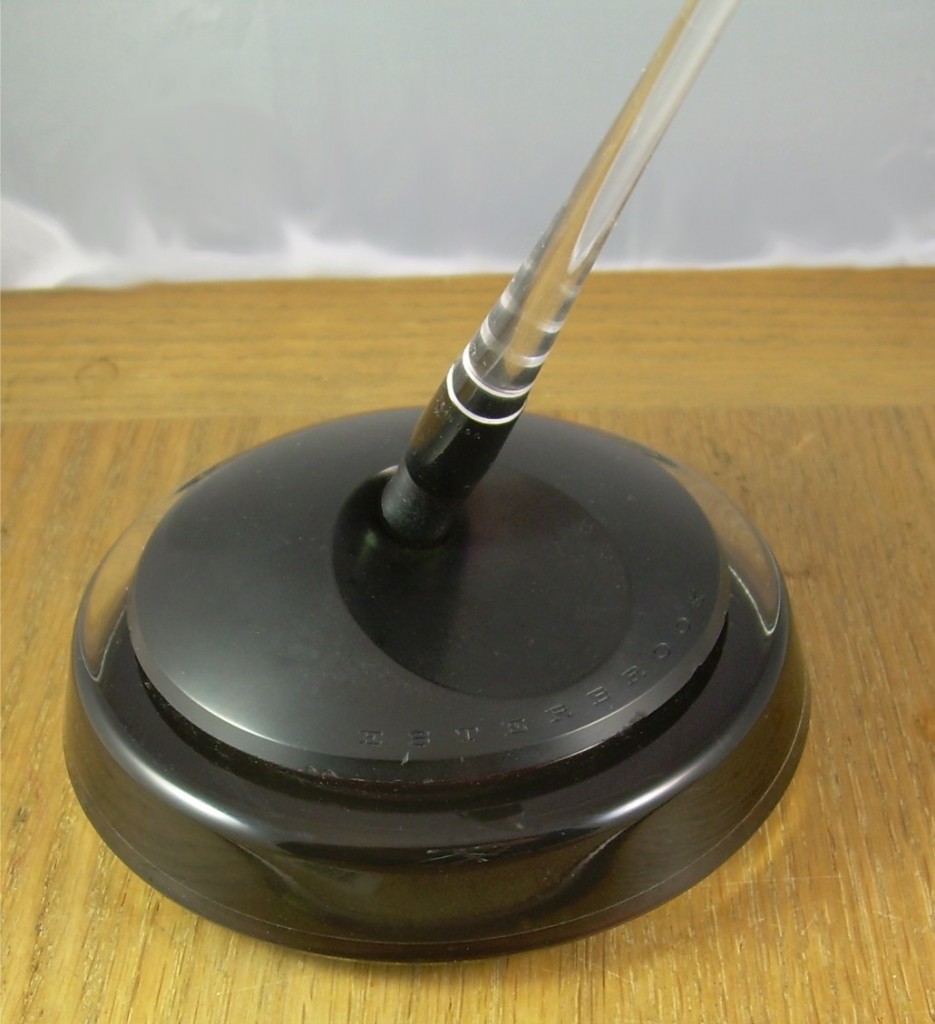 A later version of the 444 “Hockey Puck” with depressed socket

A 5000 series point with its feed; if they’re not in the holder, they don’t stay together 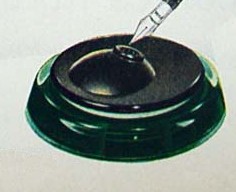 The 1955 advert, with the protruding top. 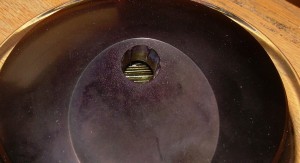 Permanent link to this article: http://dirck.delint.ca/beta/?page_id=984