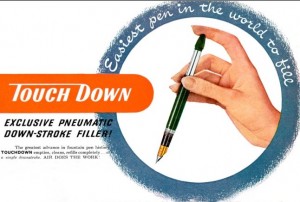 Not that pens are generally difficult to fill….

Maker: Sheaffer. For general comments on the mechanism, jump back to the Touchdown page.

When Sheaffer made the transition to the Touchdown filler, they did not radically change the exterior appearance of their pens; the major visual difference is that the threads to hold the cap are chromed rather than gold-plated and there is a chrome trim-ring below the joint.  Most models were imported from the existing Triumph line, and the primary difference is a slight lengthening of the body to accommodate the new mechanism.

The last of the Tuckaway pens appear as an appendage to this line.

Cost When New: See individual models below; for modern values, try this calculator.

Models in ascending order of cost:

Statesman: Open 14k point with platinum mask point, plastic cap.  Cost when new $10.00.  The Statesman lost its Triumph point in the transition to the new filler; compare to the previous version.

Sheaffer Touchdown Statesman – note the relatively large point, which helps differentiate it from the later Admiral

Sheaffer Valiant TD. I mention on the main Triumph page that I particularly like the look of this sort of point; the easily-repaired mechanism makes this pen just about my favourite of all I’ve owned (by an almost imperceptible margin).

Desk model: There were two models offered, the 92SD mounting a Triumph point and the 55D open-point– the latter was, as the contemporary Admiral, a lever-filling pen rather than a Touchdown, but they used the same bases. Cost depended upon the base, from $10 for the most basic up to $108 for a triple-socket set, which leaves out an unpriced but even more expensive model with little gold mascots on it.

B92SD; the prefix indicates the colour, which would only be brown or black.  The dot goes to the tail, for want of a cap.  Notice also the absence of the cap-arresting step on the barrel; there is less parts interchange than would be seen on the later Thin Model version.

Permanent link to this article: http://dirck.delint.ca/beta/?page_id=395