When Parker was wrapping up the Vacumatic’s production, they needed something to slide into the “next down from the ‘51’” position of their line-up.  The VS, whose name probably means Vacumatic Successor (there’s a couple of other candidates, but they’re equally silly), was the last non-hooded point which Parker would run out in the US until the 1960s, and for some reason was not much of a hit.  It may be that it being very close in shape to the “51”, people thought they might hear comedic muted-trumpet wah-wah-waaaaahs when they pulled the cap off to reveal it wasn’t actually a “51”.  It might also be the odd decision to make the pen with a clear Lucite feed, which may have performed better than the horrible “C-Flow” feed which Wearever had started using in 1944 but looked almost exactly like it—you wouldn’t know it was better until you’d tried it, and why try it if you thought it worked horribly?  This feature was revised in 1947, when the feed returned to black.

Something that made the pen latterly unpopular was the filler.  Technically a button filler, and thus one of Parker’s old standbys, it was a new aluminum object.  While I can’t see people initially objecting to something so manifestly jet-age, it proved susceptible to corrosion, and there are few things as unlovely as the puffy whitish aluminum oxides.  The later VSs came fitted with the same sort of aerometric filler that the “51” changed to in 1948, but even here Parker crippled the VS by just gluing the blind cap to the end of the barrel, leading to a rather clumsy finish.  That plus the old style point (“retro” was not at all a popular concept in the late 1940s) seems to have put the last nail in the VS’s coffin, and it was discontinued in 1949… in America.  Apparently it was much better received in Europe, where the open point was not so sniffed at as evidenced by the UK Duofolds, and where they either have a better sort of aluminum or know how to look after it.

It is very much like a Vacumatic in its writing properties, although one might look to the UK and Canadian Duofolds of the same age for other similar pens.  It’s a bit of a shame there was such a mania for hooded pens in North America, as I think without that impediment this might have had a rather longer run.

Production Run: 1946 – 1949 (although production was carried on for some time by a Danish licencee)

Cost When New: Haven’t quite tracked that down yet….

Point: Gold, likely 14K but not stamped as such.  Some examples made in France for the European market, carry 18 Carat points.

Body: This is also slightly mysterious to me; it may be Lucite, but is may also be a rather better polystyrene than the “21” suffered with.

Filler: Button, capacity approx. 0.9 ml, until about 1948 when the press-bar was applied.

The unfortunate clear feed. It really doesn’t look that good when there’s ink in it.  A close examination of the section of this example shows some profound thinker thought a pair of pliers appropriate for unscrewing the section. 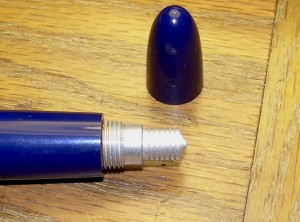 The aluminum button. Later versions did not have an aluminum collar to mount in, but were in a more traditional affair turned out of the barrel itself.

Permanent link to this article: http://dirck.delint.ca/beta/?page_id=2162