I am limiting this page substantially.  I separate it from the Skripsert because there were some relatively high-end pens which bore that label, as well as some very humble items essentially indistinguishable from what is to be found here.  In choosing “Cartridge” as a name, I’m letting myself in for trouble, since it is really not a name so much as a very broadly applicable description of a lot of pens made after 1954, and not just Sheaffers.  My problem is that it appears Sheaffer never troubled to offer a name to this lowly workhorse, and so there is a lot of circumlocqution involved in referring to it.

This is suggestive regarding the target audience, but not conclusive

Let me define my terms, then.  On this page, what I’m examining is the lowest of the low of Sheaffer’s production, a pen frequently and not without justification called a Sheaffer school pen.  Note, though, the lack of capitals on the last two words of that sentence; this was not an official name, although Sheaffer clearly expected that to be a market.

This is a Skripsert

There were three stages to the development of this pen.  The first, and the one which is more readily interchanged with the Skripsert, is the same shape as the “Thin Model” pens it is contemporary with, which means that it shared a general profile with the later Balances as well.  It differs from those grander and older pens by having a slip-on metal cap, a feature that persists throughout the run of the line.  What differentiates it from the more expensive dopplegängers in the (more-officially) Skripsert camp is the transparency of the barrel, which appeared in a variety of colours  as well as an uncoloured form.  There is also a certain cheapness in the mounting of the clip which the slightly more expensive look-alikes avoid.  The very earliest use coded numbers, apparently imported from the Fineline division (Sheaffer’s sub-brand of the time), to indicate width; this eventually changes to simple and clear letter designations (see below for more detail).

The second stage, which appeared in the mid- to late-1960s, saw solid coloured bodies appear, and the ends of the barrel and the cap took on a shallow conic section.  The third stage, introduced in the early 1970s, had exactly squared ends.  A very careful observer will see that the feed changes in the later of this third type, from a rubber comb with a boat-keel profile to a  plastic item with a flatter bottom.

There was also a late variation on this pattern, which I have found referred to as the “S Range” and which sees the basic pattern of flat-ended pen wrapped in a brass overcoat.  I suspect this may have been aimed at competing with the Parker 25, but there is little data on topic.  Were there more data, I might be tempted to treat it to a page of its own, as it is something of a different story from its unclad brethren.

I have what might be considered an illogical attachment to this model of pen, as it is the first one I ever used.  From 1975 to 1982, it was in fact the only pen I knew, having stumbled across it at the local drug-store and being taken with the “high-tech” looks of the vaned feed.  I should not speak in the singular, alas, since in that short period I went through about a dozen of them; I was innocent of the need for regular cleaning, and being a kid would misplace them pretty regularly.  However, when I was reunited with the breed in the more recent past, I realized why I got so hooked on fountain pens as a result of early contact with them.  They are an extremely good proof that cost and quality are not necessarily tied together; for all their humble blister-pack origins, these pens write as well as any other Sheaffer of their day, apart perhaps from extreme stiffness in the point.

Cost When New: The initial offering, appearing toward the back of the catalogue and branded with Sheaffer’s second-string ‘Fineline’ livery, was $2.95 which means early adopters definitely paid a premium.  This dropped to 99¢ in the earliest pure-Sheaffer appearance (you can check, with the help of  this calculator, that this is about the same as the miserable Parker Reflex) staging down to about $5.00 at the end.  An exception to this is the “S Range”, the price of which I take from a 1982 UK sales brochure; there were two versions, costing respectively £4.45 and £4.95 (this calculator will offer current UK equivalents).  With the metal cladding on the body, these would have been more expensive to produce, and that’s not out of line with the current costs of things like the Lamy Safari or Pelikano, but it seems a pretty big jump from the base model (possibly explaining why there’s not a lot of them about).

Point: Steel.  The sizes are 304 or F, 305 or M; there are other sizes, it seems, but they are more the stuff of rumour and legend than known fact.

Filler: Cartridge, capacity approx. 1.1 ml.  These pens are easily converted into eyedroppers with some silicone grease on the section threads, offering a capacity of 2.8 ml in the two later forms and 3.1 ml(!) in the first.

“Clear” and “bright” can both describe the same thing, right?

The second form. There’s a pen you’d have to work at losing.

With the cap on, the shallowly conical ends are more evident. I don’t quite know how I messed up on the scale of this photo, but it’s clearly not to scale with everything else.

The flat-ended third variant.  This was for some portion of its existence labelled as “The People’s Pen”, which was a strange bow towards the Soviet menace that decade felt.

The “S Range” variant; this brushed chrome is the less expensive version, while the other had a black epoxy finish. 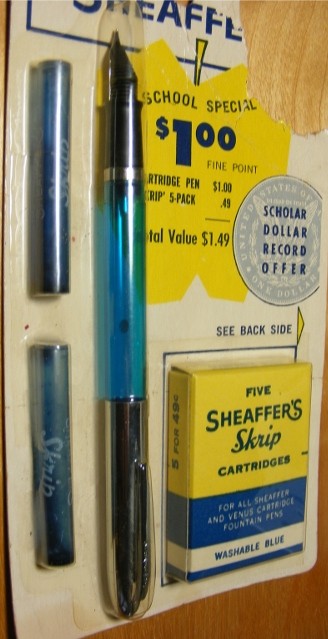 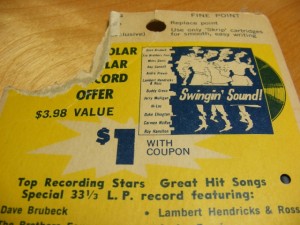 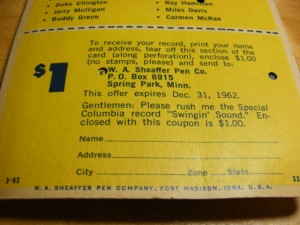 How we may comfortably assume this pen was made in 1962

Permanent link to this article: http://dirck.delint.ca/beta/?page_id=2554