When TWSBI introduced the Diamond 530 in 2010, or even slightly before, they began to moot the possibility of a vacuum-filler entering their lineup at some point in the foreseeable future.  Two years later, after a good deal of publicly displayed R&D on the matter, the Vac 700 was brought forth.

Like the Diamond, the Vac is a pen with most of the elements of pens costing several hundred dollars, at what we may still consider a popular price.  The fact that it incorporates a vacuum filler puts it in even more rarefied company than the piston-filling Diamond; while piston-fillers can be found at most price points, the next closest thing with the same sort of filler to the cost of the Vac which I’m aware of is the Pilot Custom 823, which can be found as low as $300.  Most other modern pens mounting a vacuum-filler are a lot more expensive (have a look at the Conid and Visconti examples, if you dare).  The other place one will find this system is in vintage pens, most familiarly Sheaffers, and while they can be restored to reliability, the total cost is usually rather more than the TWSBI as well.

The mechanism in the Vac 700 has somewhat more in common with the other modern pens than the earlier generation.  Where the older pens tend to rely on the flexibility of a thin piston seal, the seal in the Vac 700 is a thick conical object which is free to move somewhat between two fixed points on the shaft.  The seal appears to work in a manner similar to that of the Esterbrook pneumatic mechanism, with air moving on the up-stroke through the centre of the seal rather than around the sides.  I’m surprised to find that the draw on this mechanism is slightly less efficient than the old Sheaffer arrangement, with about 60% of the swept area of the piston taking on fluid rather than the 80-90% the old ones can manage.  The reason for this is a little mysterious at the moment, but the volume of ink this represents is certainly sufficient for most needs.

The Vac 700 is a very large pen, and somewhat heavy in the bargain.  This weight appears to lie mainly in the thickness of the walls of the barrel, and balances well; the pen is not open to charges of being overweight, as I level so frequently against other modern pens.  Some with smaller hands find that the overall dimensions are simply too much for them to handle, though; the delicate of hand may want to consider before buying.  A pleasant surprise is the lack of effect the seemingly sharp step at the base of the barrel threads has.  I had, when looking at design pictures, been rather worried about this, but with the pen in hand, assuming something like a correct grip, there’s no real contact.  The size of the pen will make some reluctant to post the cap, but for those who persist the pen is better designed for this habit than the Diamond.

While on the subject of design, there is an interesting inversion of the faceting found on the Diamond pens, with a smooth barrel flanks by faceted cap and blind cap.  The faceting on the blind cap can, in some pictures, give the impression that it has a sort of bell-bottomed appearance, but this is entirely an optical illusion.  At the cap end, the clip is also worth noting.  Unlike the Diamond clips, which were relatively simple self-sprung affairs, this is a little closer to the clip of a Lamy 2000; a large lump of spring-loaded metal.

Another feature in this pen which is seen more often in higher-end pens, modern and vintage, is a shut-off valve incorporated into the piston.  There is a smaller seal mounted at the very end of the piston shaft which occludes the flow of ink into the feed when the blind cap is entirely screwed down.  Loosening the blind cap a couple of millimeters withdraws this stopper, and all the ink can pass out of the pen in the normal manner.  In the older pens in which this sort of feature appeared, it was mainly a way of reassuring the user that the ink would stay put, as early pens were a little haphazard in their containment.  Modern pens offer it as a surety against disaster while flying, and in this the Vac 700 is one of the crowd.  Given my own experience aloft with the less-convoluted feeds and the similarly-sealed caps of the Diamond pens, I feel that this particular feature might be viewed as over-egging the batter; that sort of disaster is quite unlikely with this pen.  I also wonder if the extra action required for extended writing might not come to be seen as too great an inconvenience by the average user.  For brief jotting, the big and amazingly-vaned feed holds plenty of ink; some report a couple of pages are possible between stopper removals.

Initial descriptions of the Vac 700 indicated that it was going to be less user-serviceable than the Diamond.  The production model shows that this is less the case than was first indicated.  The point and feed unscrew in a manner similar to the Diamond, although the units are not interchangeable; the section and the point/feed unit are of a completely different shape.  There is a tool-kit in the bottom of the box, with the wrench needed to dismount the filler mechanism from the tail of the barrel, a bottle of grease, and a couple of spare o-rings which serve to seal the mechanism.  This is a lot more convenient than the fixed tail-seals of the Sheaffer mechanism, although the interior seals which prevent leakage along the shaft are not available for service; a few decades on, we could see as much written about servicing these seals as is now offered about the Sheaffers.  Apart from the capacity to change some of the o-rings, the fact that the barrel can be entirely stripped of other parts means a very thorough cleaning is possible, should need arise. Addendum- the preceding was written before the complete tear-down shown below, and it seems that with a slightly specialized tool in hand to remove the blind cap, the shaft seal is easily replaced… although the odd shape of the piston seal means there’s still a potential problem for future decades.

The writing performance is quite similar to the Diamond, although I have found my exemplar is a little pickier about which inks it likes than was the earlier model.  This possibly individual foible aside, the writing is smooth and the ink supply sufficient.  I think that, given the amount of silicone lubricant applied to this pen by the maker, it is more than usually important to give it an cleaning prior to initial use; a couple of fills with slightly soapy water, followed by a couple of fills with clean water

Filler: Vacuum, capacity approx. 1.6 ml.  If one pursues the technique seen in this video (a creation of FPGeeks.com), one can run that up to 2.3 ml (you’ll hear a different amount in the video) at the risk of having ink run down your arm.  I leave it for you to decide how important a huge reserve of ink is in your life.

TWSBI Vac 700 in Smoke; the other two initial release colours were Sapphire and Amber, with a clear one promised to follow soon.

Note the ring below the blind cap, on which the cap is settled when posted.

Vac 700 with filler in the cocked position. It is just possible to see the shut-off valve at the front of the piston.

This is as far as most people will want to take apart the pen, for lubricating the seals. 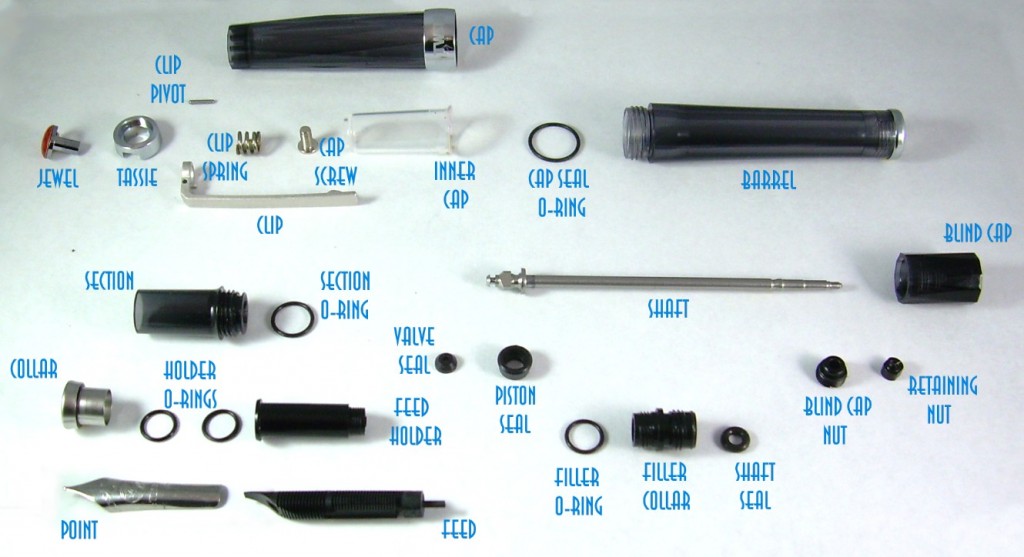 A very full disassembly, which I don’t really recommend as necessary. I think there may be another sub-component in the section, but I felt this was sufficient.

Permanent link to this article: http://dirck.delint.ca/beta/?page_id=5566