A lot of people faced with a scratchy point will think of applying some mild abrasive to the tipping to even out the rough spot.  In the vast majority of these cases, though, the problem is just that one tip is riding lower than the other, and the paper is catching against the inner face of the lower one.  The answer is to very carefully bend the tines so that they are in line once again. 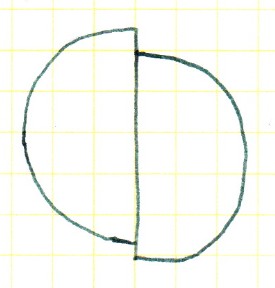 With magnification, the problem becomes obvious

The challenge to doing this is mainly one of scale.  A difference of 0.1mm in the height of the tips is vast, and less than this is needed to make writing a misery.  Even extremely near-sighted people, capable of resolving very tiny objects, need some help seeing things on this scale.  A jeweller’s loupe is ideal, but any decent magnifying glass will be an improvement over bare eyes; ideally, something between 10X and 30X should be used.

When regarding the tipping, keep in mind what part of the point actually contacts the paper.  Looking straight along the barrel is misleading; the pen should be held at an angle to show the true alignment relative to the writing plane.  I like to look at the profile as well to see if there’s any sense of which tine is astray, too.

The remedy is one of those things that can be told easily, but requires actual hands-on experience to understand; just manipulate the tines up and down until the tipping is in line.  Gosh, that does sound easy.  It isn’t the hardest thing in the world, although what I can only allude to is the frustration of finding that the resilience of the point is returning the tips to precisely where they used to be.

In some cases, as in a very flexible point or where the problem calls for substantially depressing a tine, force can’t be applied to the right part of the point without extracting it from the pen.  Refer to those instructions then apply the manipulation.  It is possible that the point was actually sitting on the feed a little crooked, and this is what lifted the tine.

Permanent link to this article: http://dirck.delint.ca/beta/?page_id=4087