This is a whimiscal pen indeed.  I got it for less than ten dollars brand new– in the fall of 2007.  It has all the styling cues of pens of the 1980s, although I guess there is a little bit of taper in the body.  It’s also got a bent point.

Pardon?  Yes, bent– it presents a little triangular foot to the writing surface, which allows it to make big fat wet marks… just like a brush.  It’s specifically designed for East Asian calligraphy, and various Japanese makers will offer a similar thing under names like “fude” and “fudemanen” (although the former can also refer to something with an actual fibrous brush-like object).  Turning it over allows it to be used without splashing great gouts of ink onto the page, but it feels very funny.  I suspect this it because the weight of the pen (and the operator, for that matter) is being concentrated by the bend, rather than taken up by the flexibility of the point.  It is closer to ball-point than fountain pen writing.

There have been questions raised about the consistency of Hero pens, as I mention on the previous page.  Some people get duds.  This particular example of this particular model is pretty well made, and doesn’t look like it’s going to fail in the near future.  On the other hand, they’re pretty inexpensive, so you won’t be wasting a pile of money if it doesn’t work.

Production Run: Apart from “sometime in the mid-1980s” as a guess, I don’t know the starting date, and they likely wrapped up production prior to 2010 (it may still be in production, but I can’t find it on the company website).

Point: I think plated steel; I haven’t been curious enough to break into it and check, and at that price it’s unlikely to be gold (although Hero does offer some 12k points, and there’s not much gold in that).

The pale panels are velour - is that not odd? 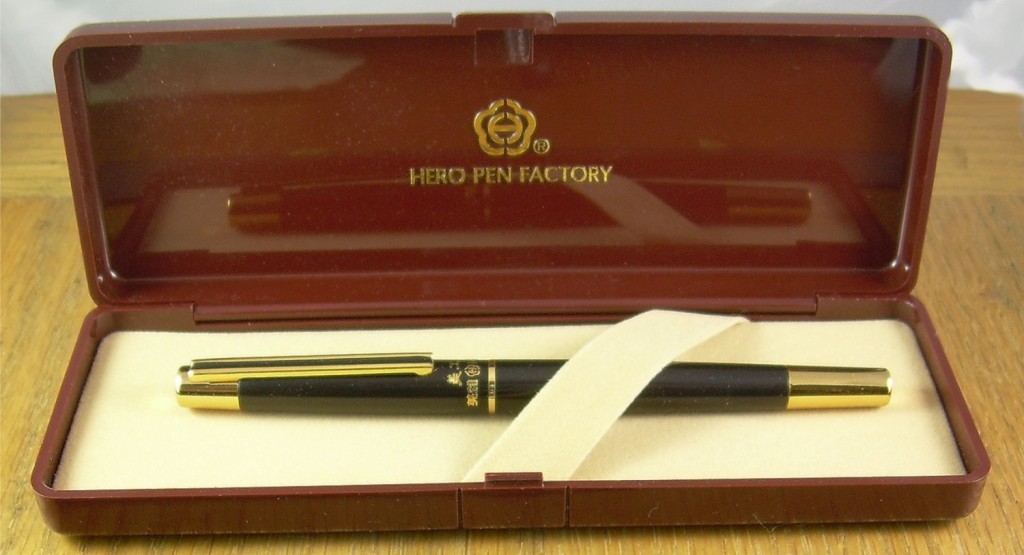 The is no instruction booklet, which is unusual for a pen in a box like this

Detail of the point

Permanent link to this article: http://dirck.delint.ca/beta/?page_id=1061