The Eagle Pencil Company was founded in 1856, in New York.  The chap behind it was a Bavarian immigrant name Daniel Berolzheimer, and I name him for future reference.  The company came along quite well, and by 1901 had an outlet and production facilities in England, and would eventually have showrooms in several other countries.

Eagle got into fountain pens quite early, offering as early as 1890 a brass-bodied cartridge-filling pen; the “cartridge” was a glass vial, and while it hardly caught on it was still in their lineup in the first decade of the 1900s.  They seem to have been great innovators in fillers, and while much of their output was rigged with levers they also offered vacuum “Flash Fillers”, twist-fillers, and some other more esoteric items. 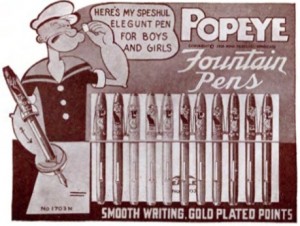 He yam what he yam, and he yam a pen.

In the 1930s, in addition to some splendidly handsome mid- and upper-range pens, Eagle brought out a line of inexpensive pens under the name “Epenco” as a response to the new deeply-impoverished market opened up by the Great Depression.  The were admitted to in the company’s catalogues, not unlike Parker’s “Parkette” line, and in addition to being bargain-priced (25¢, or 50¢ for a combination pencil) they had some novelty finishes like the Popeye pen to increase volume of sales.

I have yet to track down the exact point at which the company gave up on fountain pens.  In England, operations on writing instruments were suspended for the duration of the Second World War in favour of military equipment.  The New York factory wrapped up operations in 1958, but hardly because of a fading of the company’s fortunes but rather a move of the main part of the operations to England.  In 1964 they bought up the British operations of Koh-i-noor writing instruments, and began to offer markers.  In 1969, someone worked out that the name “Eagle Pencil Company” didn’t quite describe what they were about, and the company adopted the name Berol; this reference to the corporation’s roots is why I mentioned the founder earlier.  In 1995, Berol was engulfed by the Newell-Rubbermaid colossus, rendering it a stablemate of Parker and Waterman.

Permanent link to this article: http://dirck.delint.ca/beta/?page_id=917