Even today, Canada is having some trouble getting out of its collective self-image as hewers of wood and drawers of water; this is probably something to do with having plenty of both, as well as potash and uranium.  This was even more the case in what Wilfred Laurier declared with the reckless optimism of the day to be “Canada’s century.”  Most of the pen production in Canada was merely a sort of beach-heading undertaken by US makers, who could use a Canadian establishment as a means of getting around the various forms of trade protection laws which abounded at the time.  The Canadian market was actually relatively appealing, as we were apparently in slightly better economic shape than other nations early in the last century, but in all honesty, the great appeal to American manufacturers was our membership in the British Commonwealth; avoiding our protectionism also got a foot in the rather more lucrative UK market.

Thus, much of what there is to be seen here is a döppelganger of US pens, the only difference lying in the barrel imprint where the words “Made In” appear.  However, as the dialect of a colony diverges from the mother tongue, so there is some variation in the production of Canadian pens.  This most usually shows up as a small variation in trim, but infrequently something appears of which can be said, “Only in Canada?” (a little in-joke for the Canadian tea-drinker).

This Eclipse button-filler is more the sort of thing the company is known for. I’ll add that not ALL their pens are this colour.

This Duofold represents exactly the sort of high-end item Parker wanted to sneak across the border.

The Moderne is unusual in that the name is Canadian-only; in the US it went under different aliases

Parker Duofold of the strange 1948 Canadian excursion, one of the few Canadian pens that really doesn’t look like its American cousin

Parker Canada continued production of the Vacumatic long after the US had quit; this one is from 1949.

Lady Sheaffer (Balance), made in Toronto. It has an odd patent date and the point impression is not quite the same as on US models

Canada rather went its own way on the last incarnation of the Craftsman; the TipDip model in the US had an all-metal cap.

Sheaffer Target, which includes in its impression “R.D. 1960”, meaning the design was registered with what is now the Canadian Intellectual Property Office in that year

Sheaffer “Thin Model” Touchdown; made in Goderich, Ontario, it differs from US models in that the gold content of the point is expressed as 14k and 585.  The Snorkels were likewise similar to the US production but bilingual in their point. 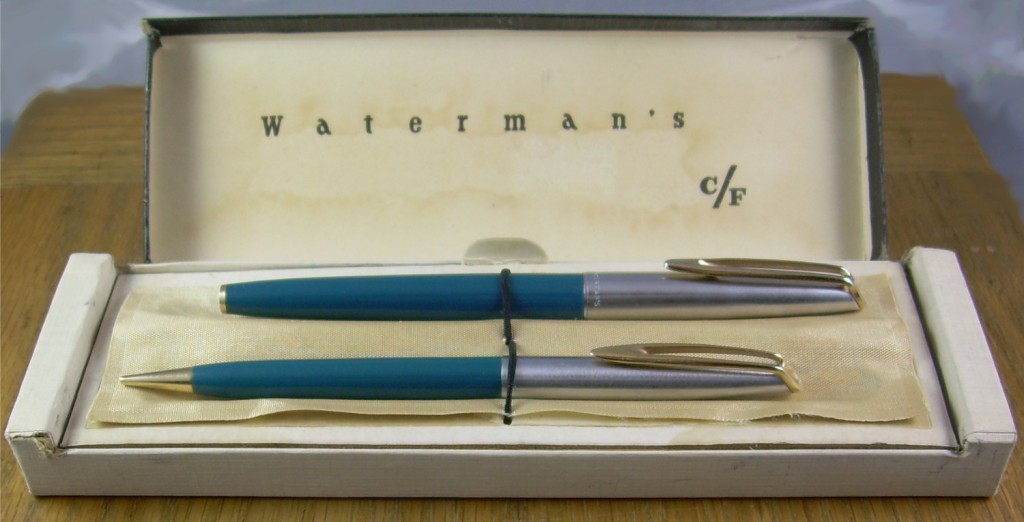 The main distinction of the Canadian version of the Waterman C/F is that there is a full set of instructions in French in addition to the English.

Waterman’s Stalwart has more bands in Canada than in the US.

One of the problems of Canadian production; there’s less reference material. Thus, this pen’s model name is tangled in mystery.

Permanent link to this article: http://dirck.delint.ca/beta/?page_id=5039