The Lamy 2000 is one of those iconic pens that are instantly recognizable to pen-fanciers and actually may catch the eye of people who are otherwise relatively indifferent to pens. When I got one myself, I cried out, “Hey, I got Darth Vader’s pen!”   The 2000 was designed for Lamy by Gerd A. Müller (who was later responsible for some Braun shavers) in 1966, following the form-from-function principles of Bauhaus… more or less; I’ve seen art critics get into a bit of a knot on this topic.  The whole idea of this pen is to be as PEN as possible in modern materials. The body is made mainly of Makrolon, a rather new acrylic at the time, which has the advantage of having an even cooler science-fiction name than Lucite, and which is apparently very durable.  The point is actually made of gold, but to keep things as monotone as possible, it is plated with palladium.  The only marking on the thing is the maker’s name in very small letters which you can’t quite see on the side of the clip’s shoulder, and the country of origin mark hidden away on the underside of the clip.  The clip, by the way, is something Lamy is quite proud of, being a solid lump of stainless steel.

In most regards, the 2000 is as perfect a fountain pen as one can hope for, achieving the Bauhaus-ish goals admirably.  The feed is a very complex object, giving as good a protection against the forces that make pens dribble as can be found; it is derived from the Tintomatic feed first seen in the Lamy 27 back in the 1950s.  The point is pleasant and willing, with a springiness that cushions the act of writing very nicely; the incautious will take this for flexibility, which can lead to springing the point.  The filler is easy to use and holds plenty of ink.  The pen is relatively easy to strip down for cleaning, too.

There are a couple of complaints frequently leveled against the 2000, though.  The first is connected to the means of keeping the cap in place, in which a pair of little sprung tabs on either side of the barrel engage a depression running around the inner steel liner of the cap.  This set-up makes for a very positive capping, as there is a decided clicking noise and a sensation when the tabs go home. It is a mechanism which will last indefinitely, but it has the drawback of leaving two small steel tabs standing proud of the pen’s barrel.  Lamy has not addressed this issue, as when one holds the pen in the Correct Manner, as imposed on the users of any German school pens until it becomes habitual, these tabs never touch finger.  Some people who have not been molded by German school pens find the tabs intensely irritating.  For my part, while not quite using the Correct Manner, I find that I can adjust my grip to avoid them as well.  The prospective buyer should be wary, though.

The other issue of compliant lies in the ink-windows set into the barrel.  Many people find them pointless, as they give only the vaguest sense of the ink level in the pen without a careful and protracted examination against a good light source.  I suspect those who level this complaint are used to pens with clear bodies, like the Pelikan Souverän or the TWBSI Diamond, or to those with huge windows, such as the Montblanc Meisterstück.  Looking at other pens designed in the 1960s, one finds the ink window had vanished from most upper-end pens– consider the Sheaffer PFM and the Parker 75— so the re-introduction of any level indicator at all was fairly unusual.  In earlier pens, the point of an ink window was not really to give the user a clear idea of the total supply of ink available, but rather to merely show whether or not there was ink left at all.  It is best thought of not as a gas gauge, but as the light that comes on beside the gauge when the level is getting perilously low.  In this, the Lamy 2000’s window is extremely clever, since with most colours of ink, it vanishes utterly until the time for refilling.

The 2000 is frequently compared to the Parker “51”, mainly on the basis of shape.  There is a certain sense that the Parker pen was taken in by German engineers who look at it and say, “Oh, that’s what they’re trying to achieve!  We can do that!” much as they’d done with French efforts to mount machine guns on aircraft in World War I, but I should say that if there is any of that in a Lamy pen it would be more the case of the earlier 27.  The 2000 is a little more of a design exercise than an engineering one, and I’d rate it as highly successful, since the pen still looks quite like cutting-edge design more than four decades on.  Examine this pen, then have a look at the 2010 model of iPod or iPad– black and stainless steel in each case, right?

Having said that, there are a few ways to in which an example of the 2000 gives clues to its age.  The first is that well-concealed national marking, which on the oldest of 2000s will read W. Germany, hidden on the inner face of the clip.  The very oldest will also have a ball-bearing in the end of the clip and lack the Lamy name on the side, while there is an identifying impression on the cap itself.  The older pens also have an L imprint on the little disc in the tail.  There are also some subtle differences in the shape of the fore-end of the pen, the most striking of which is a change in 2010 to have the stainless steel finish wrap entirely around the front.  Finally, there is a model that can be pinned down to a specific year– the one released in the year 2000, which is made primarily of steel with small black components.

Update: We have news of another model variation that can definitely be pinned down by date is the 2000M.  This is an all-stainless steel version, lacking the small black elements of the millenial special.  It will also be without an ink window, but will otherwise be the same as its makrolon stablemate.  The announced release is for 2012.  On the parent site, it’s shown as the 2000 Metall, which is some eminently direct naming.  Update of the update: The 2000M is being seen in hands from August 2012.

More updating: A red set (fountain pen, ball point, rollerball and pencil) was created for a charity auction in late 2013.  If you find any elements of it, make sure to put a found ad in the local paper.

Point: 14k gold, plated in palladium. Prior to c. 1985, some points were 18K; how general availability was, and when exactly the practice ended, are currently a mystery to me.

Body: Makrolon or steel, depending on sub-model. 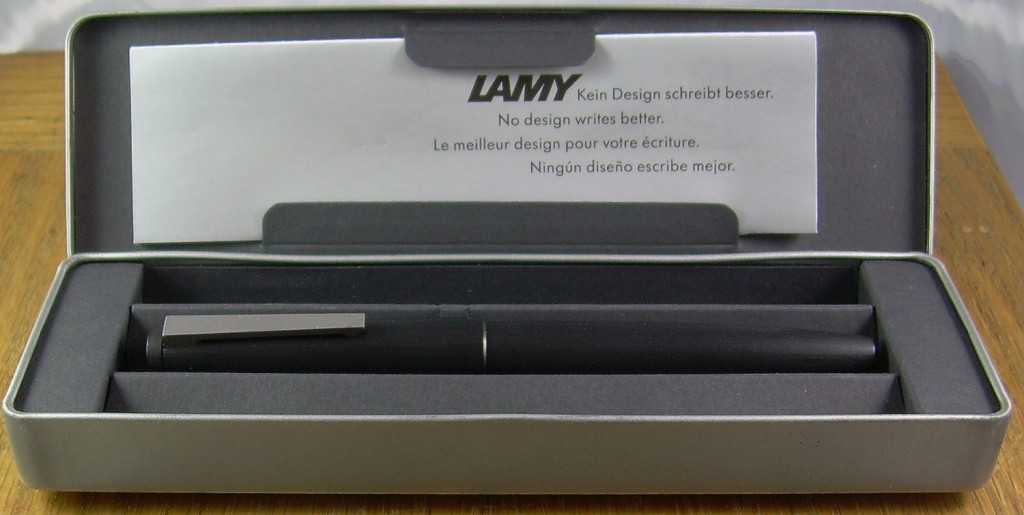 Other pens rest on velvet or a flocked form-fitted bed; the Lamy 2000 rests on a creased piece of cardboard. I suspect Klingon involvement….

There ARE markings on the point, just not where you can see them. If you expand this view, you’ll see that the back of the feed is a separate piece from the main vaned body; this in some way I don’t fully comprehend helps with regulating flow in the face of temperature and pressure fluctuations.

Comparing to the same parts of the Lamy 99 (which is practically the same part in the Lamy 27), we see that there is little we may call “revolutionary” about the inner mysteries of the 2000

Permanent link to this article: http://dirck.delint.ca/beta/?page_id=1199