Like lever and button fillers, pneumatic pens hold their ink in sacs.  Unlike those types of pens, there is no pressure bar of any sort.  It is air pressure alone that collapses the sac. In the simplest of these, there are no moving parts whatsoever, just a hole in the tail which the user blows into.  These “blow” fillers, for which the maker Croker is best known, while functionally simple and certainly mechanically uncomplicated, have the serious drawback of putting the user’s face rather less than six inches from a pot of ink, and of requiring the user to perform a somewhat intimate act upon the pen.

All other pneumatic fillers have a sliding component of some sort, either a tube affixed to to a blind cap or, in earlier models, a whole sliding outer barrel.  Pulling the tube out creates the compression space, and running it back pressurizes the interior.  This collapses the sac, and when the pressure is released, the sac expands and draws ink. 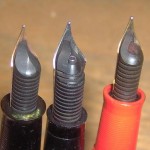 Sheaffer made two versions of pneumatic filler… or possibly three or four if one gets picky.  The first was the Touchdown filler, which apart from the clever automatic venting was otherwise quite straightforward.  This was followed by the Snorkel, which added a complication in a travelling sac-holder and an extra pressure seal.  The arguable third and fourth are really just variations upon the theme of Touchdown; the TipDip only had a different sort of feed, and the Legacy was fitted with a Touchdown converter, allowing it to be either a self-filler or a cartridge pen.

Towards the end of the company’s existence, Esterbrook offered a pen with a pneumatic filler of their own design, the Safari.  This is an interesting design which I examine in some detail elsewhere, but functionally it is the same at the contemporary Sheaffers.

The main problems with pneumatic pens lie in the failure of seals.  The whole process relies on the interior of the pen remaining air-tight during the compression stroke, and if a seal fails then there is no filling.  The Sheaffer pens have a number of metal components that ink may attack, so sac failure is also something one wants to keep an eye out for. 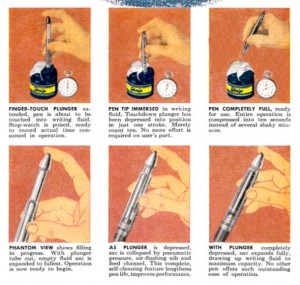 Directions from the 1949 Sheaffer catalogue

Loading a Pneumatic Pen Step by Step (leaving out blow-fillers; if you’ve got one of those, you can likely sort it out for yourself):

Permanent link to this article: http://dirck.delint.ca/beta/?page_id=387