Founded in 1838 by Carl Hornemann, Pelikan did not become Pelikan until after its sale in 1871 to Günther Wagner (who had been a partner in the enterprise since 1863), who in 1878 used some family heraldry as a trademark.  For the heraldic fans in the audience, the device is a “pelican in her piety”– seated on a nest, a mother pelican plucks at her breast to produce blood to feed her chick, something which the medieval mind found both laudable and likely. 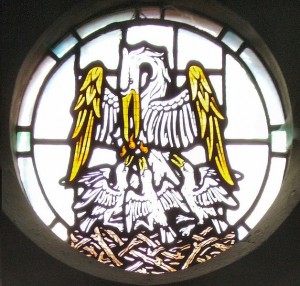 From its founding until well into the 20th century, Pelikan was a maker of artists’ supplies, a broad category of goods into which inks can easily be inserted.  Pen-making was not started upon until 1929, and in that year they brought out the first popular piston-filling pen; the notion had appeared in the previous decade, and the mechanism Pelikan used had been patented in 1925 and produced by Penkala in 1927, but that company failed.  Pelikan made a rather good thing of their pen, despite the economic crisis which also launched in 1929, offering a wide assortment of pens for diverse levels of user, from steel-point school pens to rather splendid gold-overlays.  Funnily, Pelikan’s first pen did not receive a model designation, the 100, until there were variants enough to need to differentiate it.

Initially, Pelikan bought points from Montblanc, to whom they had been selling ink for re-branding since 1924.  In-house point production began in 1935.

Pelikan reduced production substantially during the Second World War.  Interestingly, while American pen-makers were cutting back on obviously war-necessary materials like brass, the war-time Pelikans used only steel points.  What use the Wehrmacht had for gold in preference of steel, one can only speculate.  Pen production ceased in 1944, which is unsurprising given the way the war was running by then, and resumed only after the war’s conclusion.

Once production resumed, Pelikan offered a some new designs, rather more streamlined than the previous variations on the 100 but with much the same internal works.  Among these was the 400, which remained in production for decades, and which might be said to still be in production as the M400, one of the Souverän line (sometimes also referred to as the M-series) which forms the core of the company’s current output.  This is not to say that the company had but a single note through its post-war period;  one sees diverse models in various price ranges, as for any other pen-maker.

As times became more troubled for pen-makers, Pelikan made some efforts to diversify.  Some of these efforts, like the Pelikano and other lower-end pens, were successful ventures, but rather foolish experimentation in office electronics, sporting goods, and other unlikely directions proved to be disastrous in larger or smaller ways.  The company has been bought out twice, once in 1984 and again in 1996.  It seems that the Swiss and Malaysian investors, respectively, are not the sort of rapacious beasts that have caused some other pen-makers trouble in latter days, as each group seems to have been aware of what Pelikan has historically done well and returned the company’s focus to art and writing supplies.  When the current ownership took over, they actually started a campaign of buying back licences from outside producers, putting the company’s output more firmly under a central control.

The current incarnation of Pelikan currently makes writing instruments of all sorts for most niches of the market, from rather expensive limited edition pens to quite sensible school pens, along with inks and artists’ paints.

Permanent link to this article: http://dirck.delint.ca/beta/?page_id=606