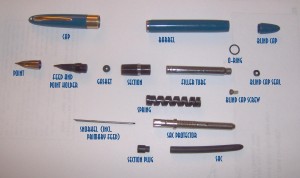 There really is a LOT of stuff in there

The most (needlessly) complicated pen in history!  In terms of the sheer number of parts involved, I think that the Vacumatic might be able to contest the claim of the Snorkel to the title of “Most Complex Filling System”, but the Sheaffer is usually seen as the winner.  There’s a lot of bits in a Vacumatic, but it lacks the somewhat intimidating extensible probe.

The snorkel tube deployed; those who have endured them might now be thinking of mosquitoes.

The Snorkel was one of the various designs that pen-makers at the mid-point of last century offered in response to the percieved public desire for utter convenience in everything.  The preceding Touchdown filler was pretty good, but there was still the need to wipe the end of the point free of residual ink.  The Snorkel design overcomes this small objection by arranging the aformentioned probe.  Rather than have the blind cap screw onto the end of the barrel, the tube to which it attaches is threaded to engage a sliding capsule.  That capsule contains the actual reservoir, and is driven by a spring, so as one undoes the blind cap, the probe built into the capsule’s front end comes out, reaching somewhat beyond the end of the point.  That goes in the ink instead of the point, and any residual ink left on it is taken up by the pen’s feed. As a bonus, that long probe can reach the corners of even inconvenient ink bottles, allowing one to get every last milliliter (and very nearly the last microliter) of ink out of the bottle.

That’s a great deal of structural complexity to allow for functional simplicity, and it is in practice a very simple thing to work.  It is also rather fun, as the process of running out the tube will almost invariably call to mind the spy films of the 1960s. 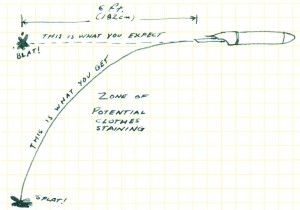 Not, of course, that this is a proper use of the mechanism

“It shoots ink six feet!” is something one will frequently see written down, and I feel I must disillusion the world on this point.  This is a true statement, but do not expect to see a two-meter stream of ink emerge from the pen.  Rather, the tiny volume of ink the pen emits will travel as much as six feet from the end of the pen, in a descending arc.  It is not very dramatic, unless your trousers intersect that arc.

The Snorkel found its way into two successive lines of Sheaffer pens, the latter version of the Thin Model and the PFM.  It has not been seen since the retirement of the PFM, and likely will not appear again.  All that internal complexity calls for a good deal of labour in lashing together, and labour costs money.  Even the relatively straightforward Touchdown was abandoned after a brief revival.  Looking at it from a repair perspective, I can also see why the modern company would not want to have too many of this sort of thing drifting around that is still under warranty; they’re not hard to refit, but they are extremely time-consuming.

In general, the Snorkel is a system with much to recommend it, but there is one aspect of it that can affict the pens it is mounted in: it is difficult to flush.  This seems an odd statement, given that thing about shooting ink, but it’s true.  All the action happens inside the snorkel tube.  The secondary feed sees none of that rushing, pressurized fluid.  Sediment can build up, and changing inks is a real trial.  I find that cleaning is best managed by flushing the pen with water as described in the Care page, filling it with water, then running in the snorkel and standing the pen point down in a shotglass filled with just enough water to fully immerse the point.  Leave it overnight (in a safe place), then use some paper towel held against the back of the point to draw as much fluid out as you can.  This sounds very tedious, and it is, which is why I suggest pens with this sort of filler are best mated to an ink for long periods; a quarterly cleaning becomes viable, and one is less concerned with getting absolutely every little trace of the old ink out if the same stuff is going into it.

If you would like to have a look at the original instructions for a Snorkel TM, I’ve got a PDF of them on hand.

Permanent link to this article: http://dirck.delint.ca/beta/?page_id=2870