The Viewpoint is the descendant and replacement of Sheaffer’s long-lived NoNonsense.  While appearing in a variety of colours, the Viewpoint is unlikely to ever have the breadth of variation seen in the earlier model.  Rather than appeal to a broad popular market, the Viewpoint is being offered as a calligraphy pen only, with none of the standard writing tips one could get with the NoNonsense.

The initial production of the Viewpoint came out of Germany, while it has now moved to China.  Apart from having the name of the country visible on the back of the point, the points have a more narrow-waisted appearance on the German pens.  There are also two distinct shapes of Viewpoint; the earlier, in both German and Chinese forms, look very much more like the NoNonsense with a smaller cap-band and transparent bodies, while the current production is a rather different pen.  The cap is angled, with a point-size sticker on the slope, while the barrels are opaque and have a school-pen style cut-out (with unhappily sharp edges) to allow the cartridge to be seen.  This last point is a sticky one, since the current Sheaffer cartridges are very hard to see ink levels through, and the open window renders the pen impossible to convert to eyedropper use.

There are, alas, also some issues in the area of functionality, with reports of skipping and poor ink flow; one of these reports was from my wife, who as a great fan of the NoNonsense and earlier Viewpoints was rather scathing in her language regarding a more recent example.

I should also mention that it is essentially impossible to find any reference to “Viewpoint” in Sheaffer’s catalogues from 2006 onward; it may be that I ought to change the name of the model to Calligraphy.

It came in fewer colours than the NoNonsense, but they were very jolly and candy-like

With the cap on, it looks rather more like the predecessor NoNonsense

The newer version of the Viewpoint; you will notice that the white dot has dropped all the way to the bottom of the line-up.  The colours on cap and section are linked to the size. 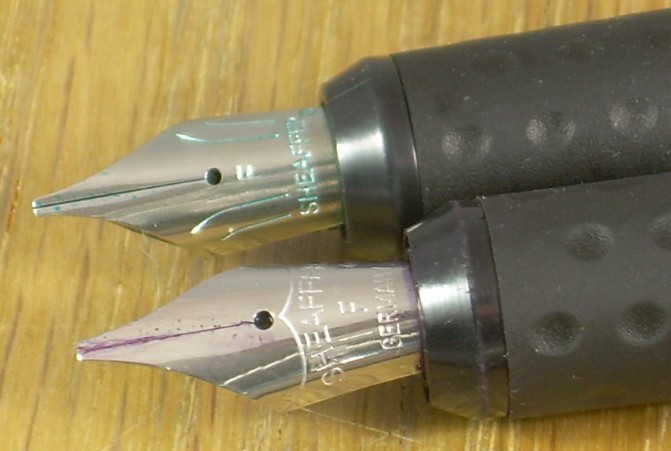 The two sorts of point on the early Viewpoint; the German one, at bottom, has a narrower waist.  The upper is of Chinese origin.

Permanent link to this article: http://dirck.delint.ca/beta/?page_id=3051