The Explosion of Colours

It is slightly unfair to date this era as I have.  Rubber was on its way out prior to ’24, as the release of Wahl’s all-metal pens in 1921 indicated, but 1924 is a watershed for something that Sheaffer did.  They released the “Radite” pen. 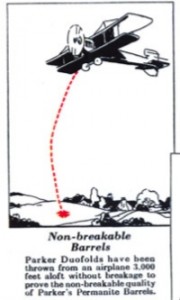 Please don't try this at home.

Radite was a celluloid plastic.  While composed of unstable materials (a combination of gun-cotton and camphor, mainly), celluloid was somewhat better at standing up to the insults of the world than the hard rubber previously relied upon by pen makers.  Advertising of the era made much of the new plastic’s “unbreakable” nature, some even bragging about flinging their pens out of airplanes.  This is a relative unbreakability, since the stuff was less brittle than hard rubber, but it’s far from absolute– I  strongly encourage all readers to resist the urge to drop a vintage Parker Duofold from the top of a skyscraper.  In short order, almost every serious pen company had gotten into making plastic pens, and even Waterman, the last real champion of rubber, was eventually moved to join in.

This Waterman shows the path "black" rubber can take.

The other great advantage of celluoid is that it is a vastly more attractive material than rubber.  While the hard rubber pens might come from the factory in a splendidly shiny state, they were given to oxidation, particularly in humid settings, and might grow matte rather quickly while celluloid is relatively indifferent to damp.  The rubber pens were also quite limited in colour-range, and while Sheaffer’s initial radite offerings were black and jade, those colours were rapidly joined by an infinity of shades covering the entire visible spectrum (although purples are rather under-represented).

Casein is an entirely different kind of pretty from celluloid

Celluloid was not the only new material to appear in pens.  Casein, also known as galalith, was a plastic made from the protein in milk, and like celluloid was capable of a whole paint-shop’s worth of colours.  The primary drawback to casein, especially when one considers it as a material to make pens from, is that it dissolves if it gets wet. 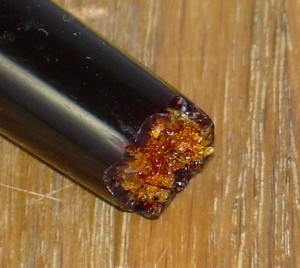 This pen needs to be quarantined from all other pens

I should probably mention that celluloid was also not an entirely perfect material for pens.  While it was entirely indifferent to moisture, it was in point of fact an adulterated explosive, and would burn with great vigour if exposed to heat above about 1500F.  Since pen repairs saw a necessity to free shellac-sealed parts through heating, and shellac releases at about 1400F, one had to be quite careful lest a pen vanish in a bright flash (along with one’s eyebrows and, potentially, workshop).  Fans of irony will enjoy the fact that the remaining rubber parts of a pen might exact revenge upon the usurping material through “ambering”, an interaction of the chemicals in ink and rubber which introduces sulfur into the plastic– there are many jade pens which now look like slightly burnt spinach (I use a pencil in the headline of this page because it shows closer to the original colour the pens would have had).  The other long-term failure of celluloid comes from imperfect combination of ingredients, which leads to the pen crumbling into a mass of sugary fragments– this is a very dangerous condition, since the fumes it produces act as a catalyst to begin the process in other celluloid items.

You can feel your forearm relaxing, can't you?

With this sudden availability of diverse wild colours, the public appetite for novelty was whetted, and one also saw new shapes arising to supplant the basic flat-ended design which dominated throughout the reign of rubber.  While there has never ceased from that time to be experimentation with the general shape of the pen, one of the new patterns came to be so popular and copied that it is almost the standard silhouette of pens today, and it was Sheaffer that pulled the trick again.  In 1928, they introduced the Balance line of pens, which tapered to a point at either end and made some claim towards ergonomics (without actually using that word).

This was a short period, really a transition between two more substantial eras.  It might be argued that the introduction of the Balance was the final unfurling of the flower for which this eight-year patch was but the bud, but I incline towards a technical rather than a cosmetic achievement to use as my guidepost.  1932 saw Parker introduce a new sort of filler that claimed to move pens into a new era in which the flimsy sac’s persistent menace was at last abolished.  While the validity of this claim is a little suspect, it does give a useful point of reference to the greatest age of the fountain pen–  the Golden Age, as it were.

They were still gloating about it six years later.

Link to gallery of pens of this era.

Permanent link to this article: http://dirck.delint.ca/beta/?page_id=95