Renewing the Rubber in a Sheaffer Touchdown

The section of this pen is more complex than is usual, but everything else it pretty uniform in all TD pens

If this sort of pen is not filling, the problem is generally down to one of two things.  Either the sac has gone hard, or an O-ring hidden in the tail has stiffened or deformed and can not longer contain the pressure the filler demands to function.  The best assumption, if one doesn’t know when these items were last changed, is that both are failing together, and to change the lot.  Before getting down to business, I suggest looking at an exploded view of the mechanism (you’ll find some here) to get an idea of what goes where, and what I mean by all the part names I’m about to throw around.

Not much difference between Triumph and open point models in this

First, unscrew the section from the barrel.  There may be some sealant on these threads, or some bright light may have applied shellac to them; if there is any more than token resistance, heat the pen just below the joint to release.

With the section off, unscrew the blind cap from the tail.  Put a flat-bladed screw-driver up the inside of the barrel and use it to release the screw that holds on the blind cap.  The slot in the screw may be slightly difficult to engage, because not only is it a slot-type screw (why do Americans resist the Robertson screw so doggedly?) but because it is frequently somewhat corroded.  Beware, because there is frequently a little spider-washer on this screw, which is sometimes between the filler tube and blind cap and sometimes between the inner wall of the tube and the screw head.  Likewise, there is a gasket to seal the hole at the end of the tube which may be in the blind cap or in the tube itself, which one should keep an eye on.

With the blind cap freed, the filler tube can be pushed back into the barrel, where it will drop out the front.  Once the barrel is empty, it may be possible to see the O-ring.  I say “may” because in a black pen an old O-ring might be very hard to tell from the barrel itself; it becomes flattened by prolonged contact with the filler tube and thus flush with the barrel wall.  It it is not obvious, it may be worth putting the barrel tail first into some water, as this may discolour and soften the ring.  Peering into the tail of the barrel with flashlight and magnifier may also reveal the edges of the ring.  Remove the old O-ring with a probe of some sort; I use a dental pick, some swear by the point on a hobby knife, others prefer a pin.  Whatever is used, care must be taken not to scrape up the inside of the barrel too badly (ideally, not at all), since the whole point of the exercise is to return it to a state of being able to seal air-tight.

Once the old O-ring is out, a new one needs to be put in.  This is slightly like wrestling a very tiny squid, as the diameter of the ring is larger than that of the inside of the barrel, and it doesn’t want to go.  The easy way to manage this task is to get a dowel that is just big enough to fit inside the barrel (the tail is narrower than the mouth, by the way), and position it so that it keeps the o-ring from falling all the way through when it inevitably tries to escape.  Tweezers and a blunt probe (a pin-head, for example) working through the open tail will eventually win the day.

Replace the filler tube in the barrel (that dowel can be useful for helping it along, too).  It is going to be harder to put in than it was to take out, as the O-ring will be pressing against it more firmly.

Give a moment of attention to the blind cap gasket.  If it has gone hard or has vanished, there are a couple of ways to address the problem.  The best way to deal with a departed gasket is to take a little bit of the excess from a new sac and fashion a new one.  A hard gasket is usually not totally hard, and a little silicone grease applied to it will see it functional enough for the purpose at hand.  Be careful not to lash the stuff around too madly, since greasing the screw that holds on the blind cap or the hole it goes into is counter-productive; it should be slightly difficult to remove the blind cap from the tube.

After the blind cap is reattached to the filler tube, pull the tube all the way out and apply a little silicone grease to the full circumference of the tube at the end away from the blind cap.  This helps to preserve the O-ring and eases the tubes passage through it.  After running the tube up and down a couple of times to distribute the grease, test the seal.  Place the open end of the barrel against tongue, lip, cheek or thumb, and pull the filler tube up.  This should produce a palable suction, ending at the top of the tube’s stroke with a little hiss of air.  Running the tube back down should make a little depression as the pressure inside the tube builds up, until there is a hiss of released air at the bottom of the stroke.  If that’s happening, then O-ring and gasket are doing their job, and it’s time to look at the sac.

At the back of the section there is a metal protector.  This is a snap-fit part, and not one which is very firmly attached; a little bit of cautiously energetic pulling will see it come off.  From this point, the process is very much like that for a basic resacking.  The old sac is removed, and in a lot of cases this is no more work than tipping the fragments out of the protector and chipping a few little bits off the nipple.

Sometimes, though, the old sac becomes bonded to the inside of the protector, and that calls for some serious measures.  Keep in mind that the protector is a fairly thin bit of metal, easily deformed or even torn, so don’t go too mad on it.  My usual pace of escalation is to start by poking about inside with a bamboo skewer, which frequently frees the stuck bits.  If that fails, one may attempt to draw the old rubber out by gently inserting a screw in the wide end of the protector and gently reaming it out.  I use a drywall screw, because it is just enough smaller than the inside of a sac protector to make it useful rather than hazardous.  Remember that the goal is to pull out rubber, not fragments of chrome plating.  The final step is to submerge the protector in isopropyl alcohol (ask your druggist for the 97% stuff, as the shelves seem to only hold 70% these days).  This is best done in another room, as alcohol is not at all good for any other pen parts, and the point of this exercise is to dissolve the rubber that’s stuck up the protector. Dissolving anything else is counterproductive.

If alcohol becomes necessary, this becomes a somewhat protracted job.  The dissolution goes slowly, and leaving the protector to soak overnight is the best bet.  The next day, have a go with the skewer again, then the screw, and if there’s still stuff up there put it back to soak, repeating as necessary.

Sacs in Touchdown pens are an item of slight controversy.  There are special “thin-wall” sacs meant specifically for this type of filler as they collapse more easily under the effect of air pressure.  However, some people suggest that the easy collapse also implies a lack of power to return to shape and a limited intake of ink.  I’ve tried both thin and regular sacs in these pens, and don’t make out a lot of difference.  I have, in some instances where an ink window is particularly nice, installed a silicone sac; these definitely end up taking in less ink, and unless one is more concerned with preservation than with doing a lot of writing, I don’t recommend it. 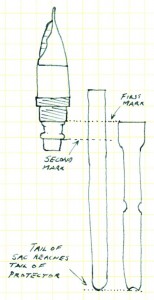 It’s better to measure; this is a little harder than it appears.

Whatever sac is used, it will have to be trimmed to fit inside the protector.  The correct length is 50 mm, whether for the early “fat” TDs any of the various TD models made after 1951 (which includes “Thin Model” pen, Cadets, Admirals, “Dolphins” and diverse Imperials), since the sac protectors on just about all of these are interchangible.  To be certain of the length, for those who won’t take my word for this sort of thing, slide the sac into the protector, and mark the point where it emerges.  Then lay it beside the section, with that mark at the point where the protector butts up against the section, and make a second mark at the pointward edge of the nipple.  Use a sharp knife or scissors to cut the sac off at that second mark, and if going to one side of the line or the other, aim for a slightly short sac; too long and the sac will crumple when installed, and won’t fill properly.

Apply the sac to the nipple with shellac as described in basic resacking, including the rest period for setting.  Once content that the sac is properly applied, apply some talc to it and reseat the sac protector on its mounting.  Insert the section in the barrel, work the filler tube a couple of times to listen for the correct puffing noises, perhaps flush the pen with water as a serious test, and the job is done… possibly

Some people like to apply some sealant at this point, to ensure that there won’t be any leakage of air at the joint.  I find that a very few pens need this treatment, but it’s not incorrect and it does prevent accidental dismantling.  Don’t use shellac for this, though, as the release temperature is quite high and a future effort at repair might damage the plastic through overheating.  The right goop is available from Main Street Pens (at the bottom of the “Pen Sales” page, as of this writing), or if you’re feeling extremely handy, you can try making your own.  Don’t try to substitute something else.  These sealants flow at a relatively low temperature, and are entirely safe for the pen.  If there is residue of this stuff on the threads connecting section and barrel at the start, or if some gets loose during the final reassembly, a little lighter fluid on a cotton swab can be used for clean-up.

Permanent link to this article: http://dirck.delint.ca/beta/?page_id=694