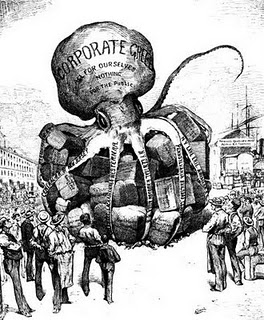 The idea of a large, grasping corporation is not a new one; this is from 1882

Sheaffer’s transformation from a family business to a corporate asset in 1966 was only the first of these damaging reconsiderations of how to run a pen company.  Parker dabbled in odd aquisitions– a clothing company in 1973 and a temporary staffing provider in 1976– before decamping to England in 1987 and being bought by Gillette in 1993 and then Newell Rubbermaid in 2000.  This last company has lately been a great carnivore of writing instrument makers, also taking into its grasp Waterman and Rotring as well as various pencil and non-fountain pen producers.

The problem with this change in nature is that the company workers go from being the skilled people upon whom the fortune of the company actually rests to mere components of a profit-generating engine.  Compare the profit-sharing which saw Sheaffer through the Great Depression with the statement issued upon the closure of Parker’s factory in the company’s birthplace of Janesville, Wisconsin:

“This decision is a response to structural issues accelerated by market trends and is in no way a reflection on the highly valued work performed by our Janesville employees over the years.”

Is that not heartwarming?  The operations of the pen-makers, no longer the focus of the owning company’s activities (which is less to offer decent goods to people than it is to merely shake as much money out of them as possible), were viewed as less important than the good will of the public towards that name– so long as the brand is driving purchasing, it is maintained, but if the actual product suffers from want of oversight and begins to wear away the consumer loyalty, shutting down is often more profitable than attending to quality.

This sort of thing might be thought of as an Irish monastery, keeping fountain pens from dying out entirely.

Apart from the potential for mishandling by corporate overlords, fountain pens in North America have also been faced with a growing level of public indifference.  It is apparently less the case in Europe, where they remained a regularly required item of school kit amongst children, but North America has seen the mass market for fountain pens essentially vanish under wave upon wave of ball-points with purchase prices so cheap that few ever considered the heaping up of the things in landfills (not unlike the water bottle menace which has recently entered the public imagination), nor indeed even paused to consider the notion of property rights when picking a pen up to use it– “borrowing” a pen has become, thanks to cheap ball-points, interchangible with “walking off with”.

From the 1960s, fountain pens have struggled to find their place in the modern writing world.  The popular imagination had started lumping them in with pocket watches as a sort of ritual-satisfying gift, appropriate to graduation or retirement, but not expected to be seen by the recipient as actually useful.  Places to buy pens began to disappear– my own first fountain pen purchase came about because the neighbourhood drugstore carried a starter Sheaffer in a blister pack, but that was an uncommon find even in the early 1970s.  In the last two decades of the century, there was a widespread assumption that there were no new fountain pens being made, that any fountain pen was necessarily an old one.

A sort of a feedback loop developed between buyers and companies, in which the assumption that the fountain pen was some kind of exotic accessory rather than a tool for daily use became transformed into fact.  Very few makers entirely gave up on popular-market pens (Montblanc is a notable exception), but line-ups became increasingly top heavy with pens meant somewhat more for show than for use.  Every maker’s most expensive pens are becoming more expensive than ever, adjusting for inflation, to appeal to the high-end buyer’s sense of exclusivity, and those few in the world who were not fountain pen buyers but were also aware of the continued existence of fountain pens came to see them as little more than a bauble to adorn a rich man’s shirt.

The cult of convenience also continued to play a role in the fountain pen’s gradual suppression.  Almost alone amongst writing instruments, fountain pens require training beyond making sure the right end is on the paper.  It is very little training, since despite the length at which I go into it the distillation really is, “make sure it’s right-way up, don’t press too hard, and rinse it out occasionally” but that’s still more effort than Dame Convenience suggests you should put into the activity.  The previous age as I describe it took convenience as far as it could go in in fountain pens, with the exception of the disposable fountain pens some Japanese makers offer, and in this particular aspect it must be conceded that the ball-point will never be unseated by the fountain pen.

As the 20th century was putting itself to bed, it seemed that presently the fountain pen would find itself consigned to a curiosity shelf.  However, recent developments in a technology that is purported to be a threat to handwriting by any means appears to have revived the fortunes of fountain pens in general.  It is still early days to say so, but there seems to be a renaissance underway.

Dates of some note

(you will see that these dates extend beyond the end of the period, but they belong to this age in their nature, or reflect a culmination of events set in motion in this age):

Link to gallery of pens of this era.

Permanent link to this article: http://dirck.delint.ca/beta/?page_id=152