This is not an old pen, despite its use of styling cues from the very early days of the fountain pen (compare to the inhabitants of the Age of Rubber portrait gallery).  I bought my example on the strength of its being low in cost and made in England.  I had been, at the time, lamenting the fall of Osmiroid, which was all but unavailable locally and in any event were being made in China (nothing in particular against China, but it was Osmiroid’s Britishness which appealed to me in the first place).  I stumbled upon this pen in a big-box craft store, and because I’m goofy about pens, had a close look.  Cheap.  Calligraphic.  British.  HOORAY!  I find that this precise model is no longer in the maker’s line-up, as they now offer two different pens with some of the attributes of this one– the Dodec with the same section but a faceted body, and the Classic with a round body but quite different section.

There’s some diversity of opinion amongst the pen-crowd as to whether this pen is any good.  I am in the camp that says it is, which I’m happy to say is quite in the majority.  For the price (this little guy, with one point, a converter and a couple of international short cartridges, was under $10), it’s a highly functional pen indeed.  There’s good distinction between the thick and thin aspects of the lines, it’s not too heavy and it doesn’t appear to go dry in use.  For a low-cost calligraphy pen, it’s pretty much all one could ask for.  I will grant that there is a little problem with materials, as the converter cracked after a couple of mountings, but that’s no reason to avoid the pen.

One aspect that I want to comment on is the big, obvious set of vents in the top of the cap.  These are there, or so rumour offers, in response to a rule from either the British or the EU government requiring a certain amount of air to pass through any cap which a child may have swallowed.  A lot of people who like fountain pens blame this rule for the drying out of pens (most frequently, modern Parkers), and are apt to look quite askance at a pen with such overt venting.  Rest assured, there is an inner cap which seals very nicely against the front end of the section.  I’ve left this pen sit idle for a day and it starts well enough.

Cost When New:  $9.95 when I bought it in a retail establishment in 2007; it tends to come in sets with several sections and diverse cartridges, so that is the low end price.

Body: Plastic, and at that price likely polystyrene.

Filler: Cartridge, international pattern (0.6 ml or 1.4ml) or converter, approx 0.7 ml (when it was functional). 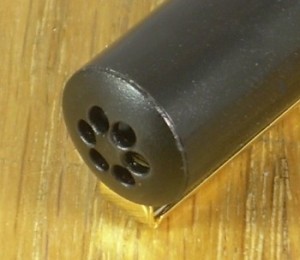 Permanent link to this article: http://dirck.delint.ca/beta/?page_id=1375