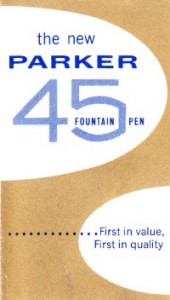 Front of the original insert

This pen is almost not a Parker at all.  This is an odd statement, considering that it was made by the company for very nearly fifty uninterrupted years, but it was in fact derived from something lying on the drawing boards at Eversharp when that company was absorbed by Parker in 1958.  This is extremely suggestive of what might have happened to the pen market had Wahl clung to pen-making a little longer, but we’re not here for excursions into speculative fiction. 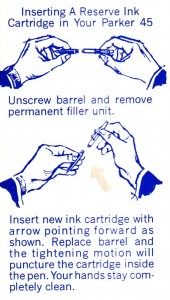 The use of the term “permanent filler unit” is telling of the mind-set of the day; this is a 1961 instruction sheet (click on the image for a PDF of the whole thing)

The 45, coming out seven years after Waterman offered the first reliable cartridge pen, was not entirely ground-breaking.  It was, however, a rather attractive design, not much removed from the silhouettes of the low-profile cars of the early 1960s, and a combination of attractive and low-priced was hard to beat in the area of sales.  Given what some people (like me) would consider a lack of filler and the strangely tiny point, the 45 was initially viewed by Parker as a value line and priced accordingly.  The “lack” of a filler was also somewhat danced around, as the initial advertising called the pen a “convertible” from which a filling mechanism could be dismounted in favour of a cartridge.  The name of the pen, though, was a direct announcement of its cartridge-bearing nature, being an admitted reference to the famed Colt .45 (the revolver, in deference to the popularity of TV and movie westerns at the time, rather than the M1911 sidearm of the US military); since just about every maker of a cartridge pen likened the filling action to firearm use, this wasn’t really a strange departure of some kind.

When it became clear that the 45 was extremely popular, a number of different variations developed.  Some were less expensive, with plastic caps, but most were incremental advances in price with metal bodies of various decoration and finish.  These variations included a gold-plated Insignia, clipless Lady 45s, patterned Harlequins, and a brushed-steel Flighter.

One aspect all 45s share is a swappable point.  This was also far from ground-breaking, but as with the Esterbrooks which popularized the notion this made the 45 a little easier to stock and to repair.  As far as I have found, the point mountings remained consistent from beginning to end of the 45’s production life, although the last few years saw a certain falling off of quality; one suspects that the forces in charge of such things were relying upon the easily-swapped nature of the points (“Don’t bother checking those too hard– if they complain, we’ll just send ’em another point”).  45s made after 2000 are easily spotted by a domed jewel on the cap.

Speaking of the points in this pen, my main trouble with 45s lies in what is apparently a universal tendency of the pen to dislike any amount of roll; most fountain pens have a limit to how much they’ll tolerate, but the 45 is best described as intolerant.  This is hardly a crippling disability, but some people find it enough of an inconvenience to put them off the model entirely.  I counsel trying to adapt to the pen’s demands, as not only are they reasonably appealing to look at, but when their intolerance is allowed for, they are extremely comfortable pens to use.

A plastic-capped version, of UK manufacture; it may be an Arrow

With the cap put aside, one sees the pleasing symmetry of the 45’s design. This pen was cleaned out and returned to function for the original winner; any doubts as to the model’s reliability are thus dispelled.

Parker 45 Flighter – this is an earlier model, which one can tell from the plastic tail appendage.

Parker 45 Insignia, which also has a bit of plastic at the end to betray its humble origins.

This is an Argentina-made example of the 45, and has some oddities about it; a black-coated metal body, and a clip that looks rather more like one from a 75 or 180. The conical ends are consistent with later, but not latest, production; probably mid- to late-1980s.

Another Argentine 45, with its “chalk mark” still in place. With an ambivalent date code for the end of either 1989 or 1999, it has an interesting double-jewel treatment; click here for a more direct look at the tail.

The pen and the point unit, stripped as far as can be without tools; take special notice of how very little metal there is in the point.

Permanent link to this article: http://dirck.delint.ca/beta/?page_id=1901