The Diamond was not quite the first pen offered by TWSBI, but it was the first that came from their policy of mass consultation.  After a sampling of the rather diverse opinions to be had on the Fountain Pen Network, the pen appeared as a relatively large piston filler in a relatively indestructible polycarbonate body, with a relatively astonishing mass-market price.  The early adopters of the pen raved about it, leading to a certain amount of controversy; the fact that it was of a similar size to a rather expensive German pen and praised for the good quality/cost ratio led a bit of a backlash from those who could not believe it was as good as a one which cost ten times as much, which is not what was being said in the first place.

The TWSBI Diamond is, however, a startlingly good pen.  The initial run proved to have some problems with the piston seal, which later versions avoided and for which replacements were sent out (whatever else one may say about TWSBI, the customer service is excellent).  This handing out of replacement parts was a sufficient response, as the Diamond is meant to be extremely user-serviceable; the box in which it is sold includes a wrench for extracting the filler mechanism, a small but sufficient supply of silicone lubricant for the seal, and a detailed instruction sheet.  It is not merely the opinion of some pen-fanciers that this is a good thing, either, as it has garnered a couple of design awards.  The Golden Pin is apparently a thing instituted in Taiwan (whence TWSBI) simply to pat upon the back any product their Ministry of Economic Affairs thinks is cool, but the Reddot is an actual big international deal, which has also been given out to heavy hitters like Apple.

The first release of the Diamond was the 530, which as far as anyone can tell is an entirely arbitrary number.  In 2011, it was replaced in production by the 540, which in addition to having benefitted from the real-world trials of the piston seals has a somewhat less grabby seal at the interface of cap and barrel; there were also some users who found cracking issues with their 530s, which was traced to a problem in the way the specific materials cured over a period of months; these pens were rather harder than the 540, but that hardness brought with it brittleness.   The replacement of the 540, the 580, is a further effort to address the question of cracking, with a supporting ring at the tail but less metal inside– a threaded insert to hold the mechanism in the 540 is replaced with threads cut directly into the 580’s barrel.  There is also a 580AL, with an aluminum filler collar and section; these attributes were projected to be a part of a model called the 550 which never saw the light of day (I expect the 550 was going to rely on decorative treatment’s of the 540’s abolished insert rather than of a filler collar).

A metal-bodied version (850) was in the works, but appears to have been dropped, possibly in favour of the Precision.

The seals of the cap are apparently meant to keep the pen from experiencing any unease while being carried aboard an aircraft, and from all reports works quite well.  They also serve to keep ink fresh and usable in the pen for remarkable periods; I have left one sit a month between uses and found it still willing, and that same test pen bore a single load of ink for nearly five months without any evident thickening.  I don’t recommend this kind of abuse, but it is nice to know a pen can hold a charge.

One of the few more or less valid complaints about the Diamond line is that there are no solid colours.  While there have been many different colours introduced, every example offered for sale to date has been transparent.  This is not a terrible deficiency, of course, and it definitely allows for a sound idea of how much ink remains in the pen, but there are some folks for whom a transparent pen is simply unappealing.

Where the Diamonds have mainly garnered praise is in their functionality.  The points, which are at the moment made for TWSBI by German suppliers, are quite supple for steel, and will allow a little bit of line variation.  Plans are apparently afoot to bring point-making into TWSBI’s own hands, and I hope that this won’t affect this remarkable feel in writing.  I’ll also mention that the points are easily interchanged, and there is a rather clever ink-bottle offered by the company which makes for about as mess-free a pen-filling as one gets with a Snorkel.

In late 2012, TWSBI introduced what their website describes as the Diamond Mini.  Since that pen does not itself have the word “Diamond” on it, I’ve put it on a separate page.

Filler: Piston, capacity approx. 1.2 ml in the 530, 1.5 ml in the 540 and 580.  The maker rates the 580 as carrying 1.95 ml, but this represents the entire volume of the ink chamber; one has to struggle to abolish the air bubble as mentioned in the last paragraph of my discussion on piston fillers, which can be messy.  It might be less so using one of their own clever bottles; I’ve not had a chance to try one out yet.

TWSBI Diamond 530. This is one of pre-sale of 300 that was offered to FPN members; in pens, I’m an early adopter where I can afford to be.

TWSBI Diamond 580 with its cap discarded (don’t let unsupervised children see it), which makes it easier to see the anti-cracking ring at the tail and the metal collar of the section; the latter is not directly connected to the plastic portion of the section, but holds it in place.

TWSBI Diamond 580AL Emerald; unusually (for this site) in battery with a bright green ink. It’s not my pen, and I didn’t want to remove and replace ink for a single photo. This would be the model the Wing Sung 3008 is… let’s say “emulating.”

What lies beneath; the toolkit and instructions 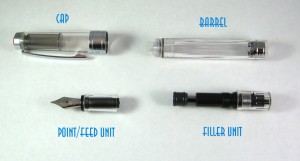 The same pen, in a rather more complete anatomization. I suggest that the piston unit not be taken so far apart, as it’s surprisingly hard to get back into the pen properly afterwards

A TWSBI point in its neat little storage tube. There is a screw-in plug to seal the ink chamber; it’s the black thing at the back

Permanent link to this article: http://dirck.delint.ca/beta/?page_id=3153