In my history pages, I mark the year the Stylist was released as the beginning of the dark ages for fountain pens.  While it is likely that the co-incidence of Sheaffer being bought up by a conglomerate with the release of a rather duff pen is indeed simply a co-incidence, I would suggest that there is probably an underlying connection; that the atmosphere of impending trouble somewhat afflicted the designers as they worked up this new pen.

I overdramatize somewhat, of course.  The sale to Textron, while epochal, was hardly an unmitigated disaster for Sheaffer, and the Stylist is hardly the worst pen ever made, although it is well up in the competition for being one of the funnier-looking ones.  While the general silhouette when capped is not too shocking, it is somewhat marred by a big, strange clip.  It is rather reminiscent of a clothespin; like many other Sheaffer clips, it is spring-loaded, but there is a little handle projecting up over the fulcrum point, allowing the user to withdraw the clip’s foot from the pocket prior to hauling the pen out.  This in theory will save wear on the pocket, and in practice I’ve found it a useful design, but the prong-horn nature of the clip is unavoidably goofy.

Inside the cap is another oddity– a flat point.  This pre-figures the one found in the Parker 180, although it is not altogether the first such thing to appear.  It is, however, likely the first one that was meant to work either way up, in a move aimed mainly at appeasing the great god Convenience; if a pen-user were spared having to rotate a pen more than ninety degrees, and could write with just about any pitch, the experience would be more like that of the blank simplicity of deploying a ball-point pen.  Because the upper side of the point offers a finer line, there is a small marker on the top of the supporting structure to let the user know that it is right way up.

There were many variations of the Stylist, as there were for Sheaffer’s other lines.  There is speculation that this pen was meant to contest with Parker’s 45; a humble cartridge pen that could be elevated through various trims into a relatively high-end appearance (and price point).  I have compared the two pens directly, and this speculation is not without foundation from the user’s standpoint.  They lie in the hand in a similar way.

I find the Stylist to be a slightly difficult pen in use, despite a good overall shape.  I ascribe this to the way the point is mounted.  Also similar to the Parker 45, the Stylist’s point is mounted in a screw-in unit, but the inner end of this unit seems to me less able to transport ink across the gap.  The point itself is not terrible, being in line with most of Sheaffer’s other points in terms of firmness, and deposits ink quite nicely when fed sufficiently.

In later models of Stylist, one will find both aspects of goofiness abolished.  The flat point was replaced by a short triumph type, still mounted on a threaded unit, and later the clip came more in line with those found on the contemporary Imperials.  Neither of these amendments redeemed the pen in the eyes of the public, and the Stylist was a very short-lived line.

Point: Steel, gold-plated in some versions.

Sheaffer Stylist, base model. It had the remains of a chalk-mark on its barrel indicating the price when I got it.

Sheaffer Stylist 404C, a mid-range model in brushed chrome finish costing $5.00. Rather than the white dot, this version had a stylized S on the clip which was then filled with white paint. 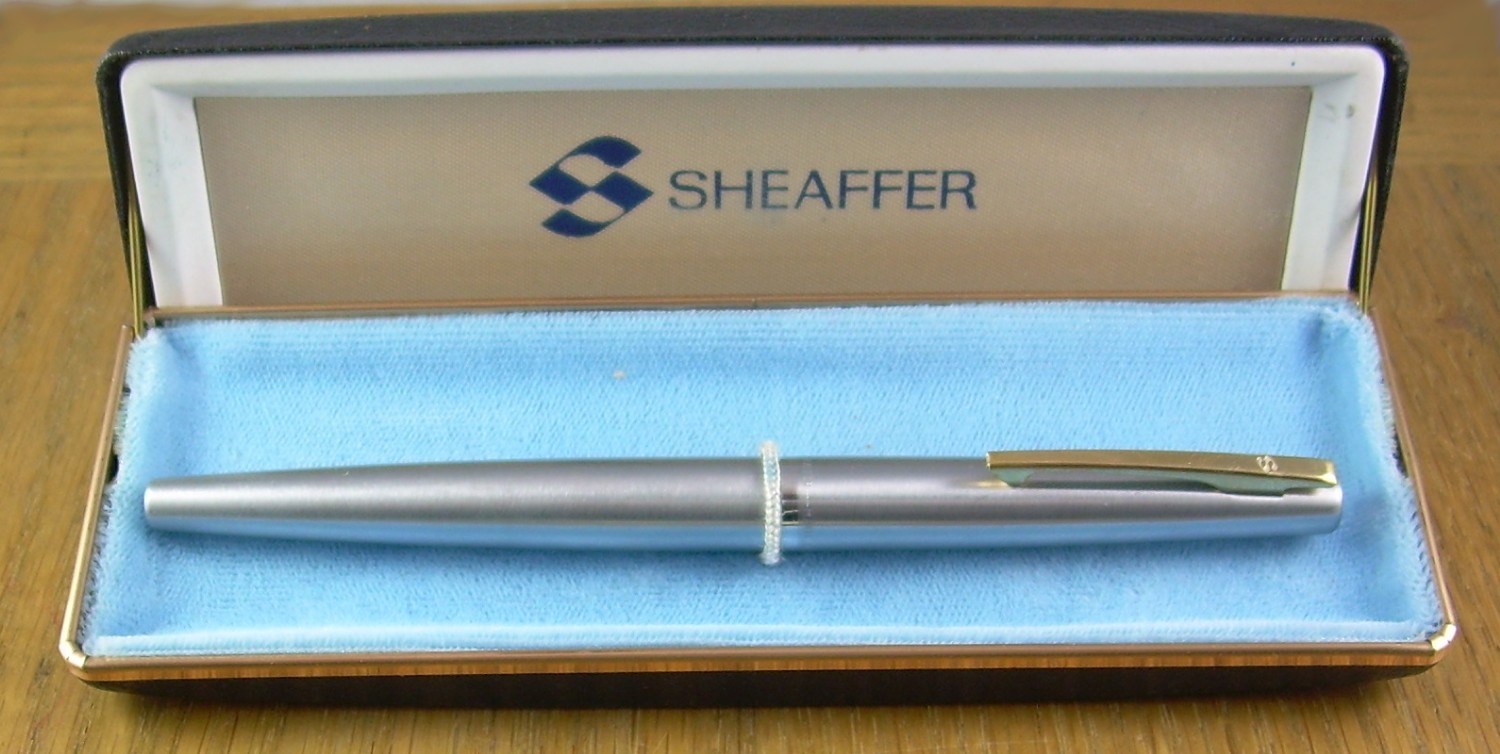 The presentation box shows off the stylized S quite nicely. While the white dot returned to the clips, this mark was used for some years to come.

Permanent link to this article: http://dirck.delint.ca/beta/?page_id=2909