Maker: Sheaffer.  This page includes the Target model and Lifetime line; if you came looking for the pens bearing Lifetime points of a different shape, try the flat top or the Balance pages.

This can be thought of as one of Sheaffer’s longest-lived model line, or as a somewhat promiscuous line into which more different variants were crammed than any other.  Attempts to describe its permutations suggest that H.P. Lovecraft was speaking not about eldritch dimension-spanning horrors but about a bunch of pens that would appear decades after his death when he wrote:

…some day the piecing together of dissociated knowledge will open up such terrifying vistas of reality, and of our frightful position therein, that we shall either go mad from the revelation or flee from the deadly light into the peace and safety of a new dark age.

This thing causes a lot of head-scratching and confused looks when it pops up.

But I get ahead of myself.  With the introduction of the PFM, Sheaffer displayed a new approach to pen design.  That pen broke the gradual evolution which began with the Balance and persisted for three decades, finally bringing about the fully developed “Thin Model” lines, with not only a new style of point but an entirely different body shape with truncated, squared ends.  In 1960, a new pen was introduced to bring this shape within reach of a slightly less moneyed buyer, in the form of the Target.  This model may not have been meant as much more than a test of concept, as it is not well documented and lasted only a short time.  The name is also a little off the usual pattern of Sheaffer’s pen monikers, being in the nature more of a victim than a victor.  With the exception of the section, which was something of a throwback (and which I’ll contemplate more fully on the page belonging to this model), the form of the new line was set; an attenuation of the PFM silhouette, fitted with the older but rather less convoluted Touchdown filler.

To add to the confusion, there was also offered in about 1960 a pen called the Imperial, which looked not at all like the PFM.  It looked rather more like a continuation of the Thin Models,  with the body shape, Touchdown filler and screw-on cap of the earlier line but the same shape of section at the Target, and selling for (probably) $8.25.  That section shape was also similar to that of the Lady Sheaffer, the feminine counterpoint to the PFM, as well as some of the lesser cartridge pens, so this proto-Imperial was not particularly ground-breaking.  It was, however, short-lived and is not frequently seen.

In 1961, the name Imperial was applied to rather expanded line-up, which absorbed the Target and apparently did away with the previous name-owning model.  Like the PFM, this initial round of Imperials had Roman numerals indicating the place in the Sheaffer heirarchy, and there was a good deal of overlap between Imperials and PFMs; Sheaffer apparently understood that the oddly squat PFM might not be universally appealing.  I’m not positive, but I believe that this is the first time since the brief shared reign of the flat tops and Balances at the beginning of the 1930s that Sheaffer could be said to have this sort of interpenetration of styles.  In addition to the Roman numerals, there was a top-of-range solid gold Imperial Masterpiece, a trim level the PFM had never soared to, and a rolled-gold Imperial Triumph.  This last model, which includes not only a reference to a previous model range but also to a style of point which was still in use on lower-priced pens in the Imperial line is one of the delightfully confusing acts with which Sheaffer presents the pen scholar. 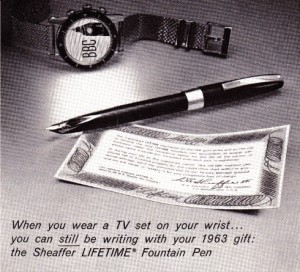 One of a set of ads from 1963 which were strangely prescient; that watch is available in 2011 from thinkgeek.com

In 1963, in response to both the company’s fiftieth anniversary and to a newfound willingness to comply with the US Trade Commission rules on warranties, some of the Imperials were renamed Lifetime pens.  It’s a little hard to discover just how long this went on for, although it was only for a couple of years to all appearances.  During this period, the Roman numerals from IV upward were set aside in favour of the same sort of price code/model number affair that the “Dolphin” pens had used, after which the Roman numerals returned.  It seems that while the Lifetime marking was used, the pens so stamped were available only as cartridge fillers, while the lower ranked pens continued to have the Touchdown filler.  I imagine this was to reduce the chances of having to follow through on the warranty by disposing of all moving parts in the pen, as well as the various bits of eventually-degrading rubber involved in the filler.  I am unclear at the moment how quickly, if at all, the self-filling mechanism returned to the line after the Lifetime marketing ceased; if it did not, it does help pin down the dates of the Touchdown models of better trim quite nicely. Update: I discover that I am incorrect in the assumption that Lifetimes didn’t appear with the built-in fillers. They’re not so commonly found, but they exist, so no only does it not help to date pens with the mechanism, but I’ve committed a bit of a slander on Sheaffer.

There were various small amendments and additions to the line throughout the 1960s, but in 1973 there was a major shake-up, with the Imperial name going to higher-end metal-clad pens, while pens of a more modest sort in the same pattern came to be called Triumphs; I continue to treat the latter here to avoid confusion with the earlier model line.  The various models within this bifrucated line changed to three digit identifiers, in some cases with letter suffixes to indicate a specific trim.  For reasons that elude me, the Imperial II continued to be available in its old form, although the clip in the latter days bore only the by-then ubiquitous white dot rather than the makers name.

After the introduction of the Targa in 1976, the Triumph and Imperial lines were scaled back dramatically, with the Imperial levels bowing out entirely by 1983 in deference to the new model.  High-end pens in this shape reappeared in 1988, also using the name Triumph to enhance the level of confusion.  In 1994, the line was slightly revamped and entirely renamed the Triumph Imperial collection.  While this final form of the line had some extremely elevated trim levels, it also included low-end blister-packed models.  The line was finally wrapped up in 1998, having done more to mystify the company’s model naming pratices than any before or since.

I wanted to say a brief word before looking at specific models about the points on these pens.  There are, in general, three different shapes, and they can almost help put a date to the pen.  The initial type, shared by the PFM, has a long diamond shape.  There is also a “dunce cap”, which was first seen on the Compact line and sees some use in Imperials from about 1965 onward.  The 1970s saw a short diamond come into use, and a return of the dunce cap to the higher end pens.  The final iteration was a return to the long diamond, and it appears that it was even more elongated than the original.

Imperial models I’ve examined (in roughly chronological order, and remember how this page started; I may sound authoritative, but all of this is under constant threat of correction):

Permanent link to this article: http://dirck.delint.ca/beta/?page_id=2664