I’m not going to break with tradition when speaking of the 50, and tradition demands one start the discussion with a brief mention of the Parker T-1.  In the midst of the space age, Parker was experimenting with all sorts of exotic materials– Teflon being the most ready example.  Another was titanium, the metal that made trans-sonic aircraft a nearly commonplace item, and if it’s good at Mach 3, it must be good in a pen, right?  The T-1 was rolled out in 1970; a pen made entirely of titanium, with the point nothing more than a continuation of the section.  Well, it turns out that the demands of high stratospheric flight are not entirely the same as those of writing, and the T-1 turned into a bit of a dud, dropped after only a year in the line-up.  It looked fabulous, but the difficulty of attaching anything to titanium meant that the tipping had an unfortunate tendency to jump ship at the slightest provocation.  Still-functional T-1s are worth rather a lot of money, of course, but one hardly dares use an intact example. 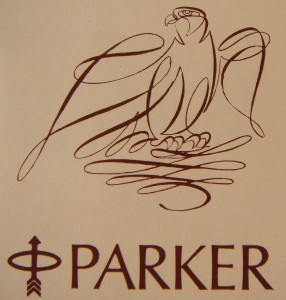 However, Parker had spent a certain amount of cash on the how-tos of building an all-metal pen, and while titanium was not really a well-understood substance in the pen world, steel is a long-time friend and ally.  Why not make a pen out of steel, then?  Thus, we come to the Falcon 50, although with a hiatus of about eight years which I imagine was largely to let the angry memories of the T-1 fade away; this may be a lesson Parker learned from reputation for flimsy plastic that dogged the “21” well after it ceased to be an issue.  It’s not a fantastic pen, nor is it a world leader (Pilot had actually beaten the Falcon into production with its Myu and Murex all-metal pens), but it was slick enough to appeal to the sensibility of its day, and does its job well enough.

In the first year of release, the 50 was available only in the “Flighter” trim.  When this proved as popular as a zippy item like that ought, the line was expanded to include a few coloured versions, and in 1981 a gold-filled “Signet” model also appeared.  While a sudden spike in gold prices is attributed to the failure of this latter model to hang on in Parker’s line-up, I’m at a bit of a loss to explain why the Falcon had such a short life.  Possibly the reputation for tip-loss was still floating about; I know that I sometimes hesitate to use mine through mere reading about the the history of earlier model.

Body: Same as the point.

This pen is, to the knowing eye, appallingly mutilated. An effort has been made to efface a personalization on the cap, and while this effort was not entirely successful (I don’t know whose name that is, but I know there was a name there) whoever did it tried to disguise his work by applying his abrasive broadly. The remains of the personalization show a date in 1980, so this may have been a black pen at one time.

Permanent link to this article: http://dirck.delint.ca/beta/?page_id=1916