The Renaissance of Fountain Pens

This is an extremely speculative chapter of my little history, because if I’m right at all about it then it’s happening right now.  A few chapters back, I mentioned a graph plotting the sales of fountain and ball-point pens against one another.  I’d like to re-examine that graph.

Click image for link to article at archive.org (it’s gone from its original home)

The point of the study was that fountain pens, after getting done over quite vigorously by ballpoints, recast themselves as a “luxury item” as I somewhat describe in the previous chapter, and remain in the market as they no longer directly compete with the newcomer.  I question this somewhat, but the data is interesting.  The curve of ballpoints flattens, while that of fountain pens begins to steepen.  The darkest of the dark age is behind us.  In part, I suspect saturation of the market for ball-points– while made to be thrown out, they do last a long while if used carefully and will hold a charge (so to speak) a very long time, and there’s only so many boxes of 20 one needs to bring into the house.  The only way to seriously increase sales is, I suspect, increase the amount of writing that needs doing and the number of people doing it.

That brings me to the other item which I believe is driving the renewal of life’s spark in fountain pens– the internet.  There is much moaning about computers in general doing away with handwriting (the article is not quite on topic, but it has a elegaic air to it that’s hard to miss), but they also allow geographically diverse geeks and weirdos to get together.  We who understand and enjoy fountain pens may never see each other in public, but thanks to being connected, we know that we are legion, and we also know that even if inks and repairs can’t be found where we live, they are actually available somewhere.  In the Dark Age, this wasn’t in place.  Each fountain pen user might as well have been the last Arthurian knight, watching from a hilltop as the milling hordes of barbarians below grunted and growled, never dreaming that there was a fellow on every other hilltop.  Now, the watch-fires are lit, and we know there’s a support system in place.  Despair, at least, is not longer an issue.

Not only do the users have some sense of mutual support, but the makers of pens can also get a better sense that it’s worth offering pens to a wider marker because it actually exists.  Not only are the old makers seeing some revival of their fortunes (although they’re also getting a lot of guff from a more educated market), but new makers are springing up.  One of the more remarkable examples is the Taiwanese company TWSBI, which has been making a point of engaging an online community to produce a pen that is pleasing to a mass market, at a popular price (comparable to the low-end cost of Sheaffers and Parkers in the Golden Age), and keeping firmly atop any developling quality concerns.  There is also the slightly more up-market is Gate City Pens, with their pricy but interesting atavisms.  If there’s not a demand, why the supply? 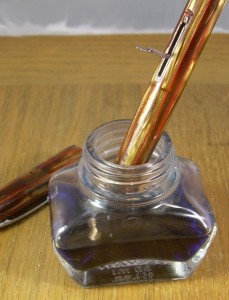 With the right music, this is an excellent if slightly brief moving meditation

Another interesting effect of the internet, or at least the new millenium (one of the reasons I chose to start this era when I did), is that a lot of people seem to be fetching up against future shock, or some similar sensation.  The onrushing and ever-mounting technology we find ourselves awash in is extremely helpful and quite convenient, but some are apparently asking whether making a god of Convenience is still quite the thing.  Slow food, retro- this and that, gardening, and various other manifestations of a preference for doing things in a less techno-moderated and more traditional way are springing up.  The filling of a pen takes on a role as a small ritual of resistance to the mad demands for ever-increasing productivity, and the potential durability of a fountain pen challenges the modern consumer paradigm of constant replacement-purchasing of the next great thing.  It’s a mature techology, after all– you need not fear that in six months it will be rendered obsolete by the rollout of iPen 3.9, nor for the most part worry whether there will be compatibility issues between last year’s ink and the newly-purchased paper.

I don’t suggest that fountain pens will ever regain their pre-1950 pre-eminence as the thing everyone with a pen would use.  Realistically, there are now other options that simply didn’t exist then, and that will necessarily keep the rebound muted.  However, it’s worth noting that when the ballpoint appeared, fountain pens were reaching full maturity as a technology, and what toppled them was not just the cheapness and ease of the disposable technology, but the novelty of it.  That novelty is now gone, and they’ve now been around about as long as fountain pens had been in 1950.  They are, or should be, a mature technology as well, and there’s not much more polishing to be done with them either.  Such flaws and faults as aren’t now dealt with are likely to persist, and each sort of pen will have to carry on in the face of the other upon its merits.

Link to gallery of pens of this era

Permanent link to this article: http://dirck.delint.ca/beta/?page_id=167