This is a new entry into the children’s market for Pelikan, and I wonder if it isn’t intended to shuffle the Pelikano Jr. out to pasture.  I hope not, because the latter is an excellent purse-pen, while the Griffix is not, and as it is even more firmly kid-specific than the Lamy abc.  I should, I suppose, call this pen the Griffix 4, as it is the last in a staged series of implements meant to run kids up through the stages of writing.  Griffix 1 was initially a “wax pen”, which I might characterize as a mechanical crayon; a thin shaft of wax, in orange, blue or black,held in a gripper which releases with a twist– this has been replaced by a simpler rachet mechanism which looks a lot easier for the wee ones to deal with.  Griffix 2 is a pencil operating on long-established twist mechanism, although the thing that gets twisted is the tail-paddle rather than the nose-cone or a central joint.  Griffix 3 is an “ink pen”, a title even more laughable than the Griffix 1’s, whose working part is one of those hard-tip fine-line markers.

The primary problem of the 3 and 4 is the cap.  Like the Lamy, there is nowhere specific for it to live when the pen is in use, and I can see this leading to loss when in use by the target demographic: people under the age of 10.  They also strike me as less positively attached than the caps of either the Lamy or the Pelikano Jr., militating against their travelling in purse or pencil case, although I will admit to not having tested this aspect of the fountain pen at any length.

Like any German school pen, this system is meant to train the kids to hold their pens in the Correct Manner.  I don’t, despite the way I’m expressing the concept, have any brief against this sort of indoctrination, and I find the way the Griffix goes about it is at least semi-whimsical.  If one is holding the pen the right way up, there is a smiley-face molded into the barrel which beams upon the user from between thumb and forefinger.  If the Manner is Incorrect, smiley will be absent.  There are, I should mention, leftie-specific models which will encourage under- rather than over-writing.

Apart from my misgivings about the possible fate of the Jr., I am in favour of this system, and all the moreso after looking at the materials on the Griffix website regarding the goals of muscular control for each level.  The fact that it appears to not be distributed at all in North America adds a little “forbidden fruit” appeal to it.  I also have a twinge of habitual resistence to allowing corporate branding in my life, which the little tradable “fun buttons” seem to exist to foster, but loyalty to a brand because it is a good product is no folly, so I’m going to let my son be exposed to this line of marketing.

UPDATE: The tradable fun buttons have been done away with, sometime between 2011 and 2012.  The space is now occupied by a molded happy face, which reinforces the one on the section. Also, it appears that the Pelikano Jr isn’t going anywhere after nearly a decade of internal competition from the Griffix.

Body: Er… plastic, of some sort.

Filler: Cartridge, capacity approx. 1.4 ml.  Pelikan has a Griffix-specific line of cartridges, with diverse interesting scenes printed on them; one hopes they’re translucent, so the ink window in the side of the pen has some utility.

The Pelikan Griffix, ready to write. The cap, having nowhere to reside, has promptly been kicked under a desk.

Griffix with cap in place. You can see in this shot that the grip texture is different on thumb and finger spaces, lest the child run mad. 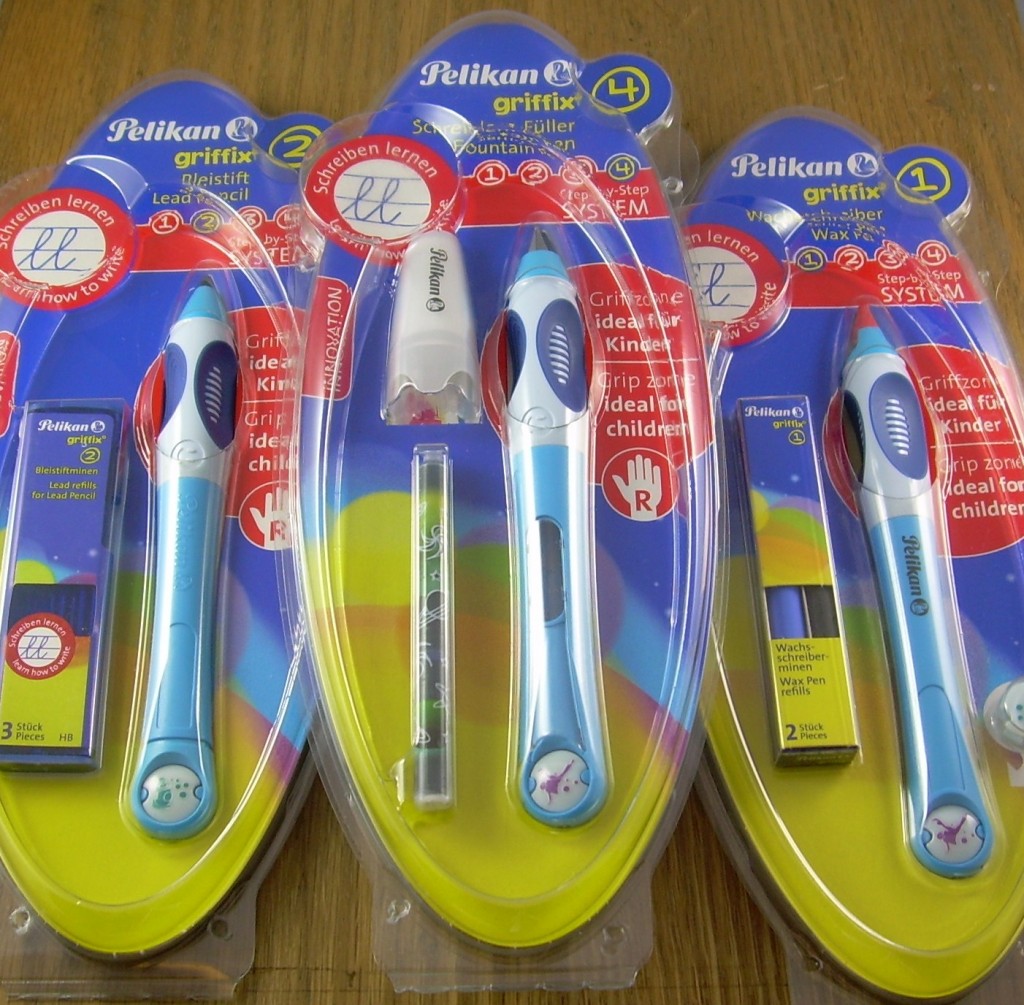 All but the Griffix 3, since I don’t see any real utility in teaching my son to trust non-fountain pens.

Permanent link to this article: http://dirck.delint.ca/beta/?page_id=2200