The early history of A.W. Faber-Castell is somewhat similar to that of Koh-i-noor; a pencil maker that drifted into other writing instruments.  This company is one of the oldest I mention on this site, in fact, having just observed its 250th anniversary (in honour of which they set up a site with a very detailed history you may prefer to what follows), it having been established in 1761 by Kaspar Faber.  This chap was a cabinet maker in Stein who began in pencils as a side-line, and apparently found the making of pencils on his own more rewarding than fitting drawers for someone else’s enterprise.  The pencil-making was continued and expanded by his son, Anton Wilhelm Faber, whose initials became fixed to the company name.

Pencils continued to be the name of Faber’s (or perhaps, the Fabers’) game through the 19th century, although they found themselves falling behind somewhat in both industrial capacity and quality relative to France and England.  The fourth head of the company, Lothar, had been sent to study in those nations in an effort to discover processes for improving the product, and his success in doing so saw the company flourish, with branches appearing in various European capitals and also in New York.  This latter branch was established under his younger brother Eberhard Faber, and in the subsequent generation would split from the parent company to pursue business as an entirely separate entity; I drop the name here to clear up the relationship, which had occasionally given me confusion, so I imagine others might also wonder.

Lothar’s activity in his chosen field led to him becoming a literal pencil baron in 1881, when he was elevated to baronial rank by Bavaria.  This got him a “von” to tuck into his last name, and the right to pass along the title to his son; he had actually been given a lifetime peerage in 1862, similar to an English knighthood, and had also been named a chevalier of the Légion d’Honneur by Napoleon III in 1867.  This made it technically possible for his family to run in the circles of the nobility, although in the somewhat splintered set of states that were slowly congealing at the end of that century into the modern Germany, they were not sufficiently noble to avoid minor scandal developing when Lothar’s grand-daughter married above her station to Count Alexander Friedrich Lothar von Castell-Rüdenhausen.

He was apparently willing to address the potential problem by renouncing his title, and as an apparent reward for this show of affection was re-elevated as Count Alexander Friedrich Lothar von Faber-Castell.  The Wikipedia entry goes into somewhat greater genealogical depths on this matter, but for my purposes this marriage offers two important points.  The first is the appearance of the current name of the company.  The second is the interesting semi-matrilineal transmission of ownership; Alexander dove into the pencil business and ran the company for over a decade after his divorce from Ottilie von Faber, and their son Roland inherited the company on Alexander’s death. 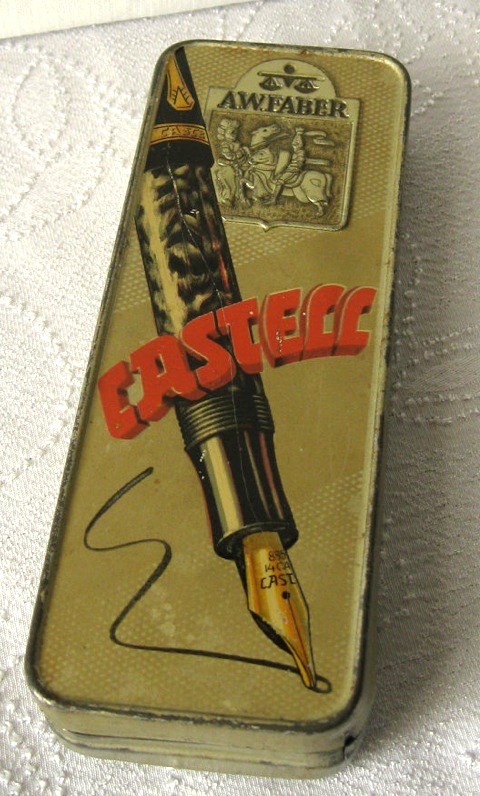 The image on the tin is likely of an Osmia-made pen. The heraldry student in me is interested that the modern company logo is unseating the knight on the right of the picture rather than the left.

Faber-Castell passed through the first half of the 20th century in much the same way it had the last half of the 19th; making buckets of money on pencils and other art/drafting supplies of various sorts, as well as slide-rules, which they had added to their line in the 1880s.  Like many other German companies, Faber-Castell was rather ill-affected by the Second World War, and lost a number of their overseas holdings.  The company has since, however, recovered much of the economic ground that conflict ate from under it, with their home page listing 31 countries it has a presence in, and it continues to apparently thrive in the hands of the eighth generation owner, Count Anton Wolfgang von Faber-Castell.

…none of which really touches on fountain pens, does it?  Faber’s own site is somewhat silent on the point, and other sources are not extremely illuminating.  The company’s first excursion into pens appears to have been toward the end of the first decade of the 20th century, when they somewhat belatedly joined the great pen explosion.  Their initial offerings were likely all produced out of house and rebranded; Kaweco seems to have produced at least some of their pens.  In the 1930s, Faber-Castell reunited with breakaway Nuremberg branch of the family, which had been producing much the same sorts of merchandise, and subsequently bought up the pen-maker Osmia.  This latter acquisition was used to produce pens under Faber-Castell’s brand and also under its own name.

In a move similar to that of Cross, Faber-Castell discontinued fountain pen production in 1975, for what one assumes are reasons related to the falling away of the market.  If my interpretation of the company’s own timeline is correct, they resumed production in 1996.  Likewise, I am a little uncertain of the appearance of the company’s high-end marquee, Graf von Faber-Castell, which is definitely in competition with Mont Blanc and Pelikan for the deep-pocket pen-buyers; it may be as late as 1999.  Whether hung with the noble title or not, the company’s modern output all shows a similarity of design in much the same way as Lamy’s products; if one has seen a Faber-Castell pen, one is apt to recognize another.

While I don’t have a lot of experience with the company’s pens, I have to say that I’m abstractly fond of this company.  Any company that clings to what I suppose we must call its base competency through two World Wars (three if we count Napoleon’s multi-front efforts) and makes an evident go of it is one I must respect.  There is also the fact that it remains a family business, which usually has a good effect on product quality in general; there are few who are willing to have their name be synonymous with poorly-made junk, especially when that name has a title of nobility attached to it.

Permanent link to this article: http://dirck.delint.ca/beta/?page_id=5986