Return to Caring for a Fountain Pen

Without ink, a pen is mere decoration.  One of the great charms of a fountain pen is that it is possible to select an ink to suit one’s mood, as there are plenty of inks in the world that are suited to use in a fountain pen.  Before considering any of them, though, a dire warning– some have lacquers and chunky pigments and all manner of things which don’t go through a fountain pen the right way and will stay inside as long as they can possibly manage.  So, avoid at all costs: 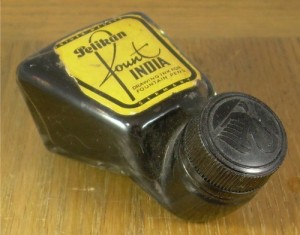 I wouldn’t leave it in the pen overnight, frankly

Frankly, avoid any ink that doesn’t specifically say it can go in a fountain pen, and think hard about ones that claim they can if you’ve found them in an art store.

Even the “safe” fountain pen ink is a bit of a witch’s brew of odd ingredients.  It can best be thought of as a water-based dye, with some surfactants and other additives.  These latter ingredients, in addition to keeping the dye in suspension, have a role in the way the ink is absorbed in the paper, which I’ll touch on in a moment.  I want to quickly mention “iron-gall” inks, which have a somewhat different make-up from most modern inks.  They’re a bit of a throwback, being closer to ink as it was known before fountain pens, and contain some iron and some tannic acid.  These materials react with the paper, not just dyeing it but amending the cellulose itself.  The word “ink” derives from “enkaustos”, meaning “burnt in”, and that’s just what oak-gall inks do– a pen using an this sort of ink must be flushed with great regularity and frequency.

I should at this point mention a little myth that exists around inks.  A lot of pen-makers that also make inks will say dire things about the ill-effects of using any other ink in their pens.  This is not unlike the cant of auto-makers who insist that one should only use genuine Mitsuvolksler parts in your Mitsuvolksler car.  There are a lot of people who go to private tire shops rather than the dealership, and their cars do not instantly collapse into flaming heaps; likewise, a pen can be filled with any maker’s ink and remain a perfectly functional pen.  Don’t worry about it.

Having said that, I will also mention that if changing inks, a thorough flushing is in order.  Since inks are a witches’ brew, it is never certain that the ingredients of one will get along with another.  It is known that some inks added to other inks result in curdling.  I don’t suggest never mixing inks, as one can achieve some very nice and useful colours, but don’t do it inside the pen.  An ink turning chunky in a bottle is a mere disappointment, while turning chunky in a pen is a low-grade repair job.

The way ink looks on the page is a bit of a balancing act of three factors:  the ink, the pen that deposits it, and the paper being written upon.  The ink’s recipe, as mentioned above, mainly determines its surface tension, which in turn defines how it runs out of the pen and how much it spreads out once it’s loose.  The pen’s point and feed also help to determine how much ink gets out in a stroke; if you go to pen-users’ forum, you will see a lot of discussion about whether an pen is wet or dry (likewise about inks, with reference to the previous point).  Finally, the paper itself has bearing on the matter.

Paper is, at its base, a piece of felt made out of wood fibres.  How much pressure gets put on it during its creation and what sort of surface finishes are applied will affect how the paper accepts ink.  Newsprint sucks up ink, as it is loosely composed and unfinished.  The glossy paper of magazines has a finish on it that tends to reject ink, leading to smearing.  As a general rule, good paper costs more, but not lots more, than bad.  Rhodia, Clairfontaine, and Apica are three names that spring to mind when considering good paper, but there are inexpensive note-books using bagasse (the left-overs from getting the sweet out of sugar cane) that are also extremely good; none will break the bank.  I’ve tried quite expensive 100% cotton paper sold as being specific to resumés made in an ink-jet printer, and found it disappointing.  One need not spend a pile of money on paper to enjoy writing, but a little experimentation is likely necessary to find the preferred paper. Update: there are some very useful thoughts on the matter of paper to be found here.

This happens when ink pools at the end of each stoke

Once this triumvirate of factors has finished working to produce a word on the page, one can critique their performance.  First, one may ponder whether the ink shades– that is, does it have light and dark variation in the tone of its colour, depending on whether more or less ink was present. Whether this is a good or a bad thing depends on the writer’s own tastes, and whether it happens or not depends on the saturation of the dye in the ink; more dye tends towards less shading.  The thickness of the line also has bearing on whether shading is evident or not, as in a thin line the difference may fall below the threshold of perception.

Feathering and bleedthrough are less subjective, both generally being frowned upon.  Both have to do with the way the ink enters the paper.  In the former, the ink penetrates sideways, working its way along the fibres of the page, a process which renders the lines fuzzy.  The latter sees the ink sinking right though the paper, starting to emerge on the opposite face of the sheet.  Extreme feathering can render writing illegible, while extreme bleedthrough is merely annoying in that it renders the verso of any page unuseable.

Have I frightened you badly with all my rambling?  Let me now comfort you with the prospect of an infinity of inks that can be used safely (with regular cleaning, of course).  Each of the following is an ink I’ve actually had some contact with; don’t take its mere presence on this list as a recommendation, though– I may have caveats in the page for each maker:

Permanent link to this article: http://dirck.delint.ca/beta/?page_id=18