Depending on your pen, this can be easy and obvious, difficult and concealed, or some other combination of those four words.  I present the more popular sorts of filling systems below in order of rough likelihood of someone encountering them as opposed to the alphabetic mode of the drop-down menu above. 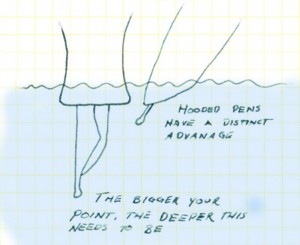 Before the list, though, there is a general rule in filling a pen:  Submerge the point.  If the intake, if we may think of it thus, is at all exposed then you’ll fill the pen with air rather then ink.  As shown in the picture opposite as a practical measure one slightly submerges the grip as well.  You can also see that a hooded pen requires rather less depth to operate in than other sorts.

There are a few extremely uncommon fillers or variations that I’ve left out, either because it’s extremely unlikely that anyone who needs instruction will find themselves with one or because I’ve never heard of it.  If you’ve got a Dunn or a Holland, you’re probably hep to its works.

Permanent link to this article: http://dirck.delint.ca/beta/?page_id=34