While Parker was busily developing a pen to mark a milestone anniversary (possibly, sort of) in 1939, Waterman was looking to the future.  At the end of that year, and coincidentally just in time for Christmas, they introduced the Hundred Year Pen.  With a body made of the recently-developed synthetic material Lucite, a huge point and the long-perfected Waterman filling mechanism, this pen came with paperwork declaring it to be all but invulnerable to the insults of Time.

I have seen other commentors upon the Hundred Year Pen make much of the radical departure of its initial design from preceding Waterman efforts, and given the remarkable conservatism of Waterman’s designers it is hard to disagree.  The primary point of radicalism is the Lucite itself, which allowed for transparent and brightly-coloured bodies, and this garish aspect is apt to grasp attention.  This aside, there is a somewhat Buck Rogeresque ribbing of the barrel which is strange but which does not really transform the silhouette of the pen from those which went before (and which was optional anyway).  That silhouette is less strictly tubular than most previous Watermans, but that seems more a case of the company finally acknowledging what most other pen makers had been up to since the start of the decade.

The final new item introduced in the Hundred Year was the top-rivetted clip which would be essentially universal in Waterman’s line-up.  The clip was likely not part of a specific consideration of the Hundred Year’s attributes, but a general response to the military regulations regarding pens and their effects on pockets.  While the US was in 1939 officially not interested in joining any conflicts, the atmosphere of the time made it likely that the military market was apt to expand.  This clip was actually a second-year innovation; the first Hundred Year Pens had a slightly different arrangement. 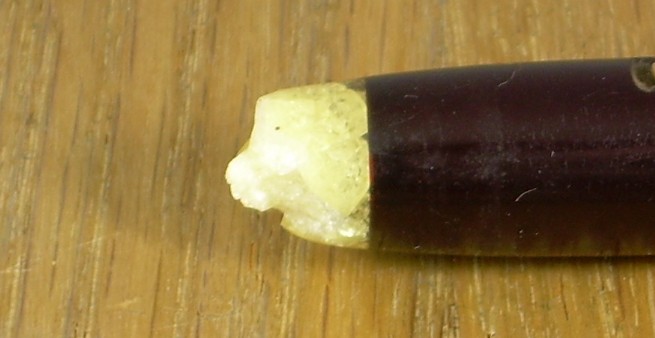 This one is not the worst I’ve seen, either.

Ironically, it was the coming to fruition of this expected expansion that dealt the Hundred Year Pen a significant blow.  With the entry of the US into the great global conflict, Lucite’s availability became restricted; the durability, lightness and transparency that made it interesting as a pen material made it highly desireable for warplane canopies.  While Parker chose to render its Lucite pen a restricted-production item while keeping it in the catalogue, Waterman fled back to celluloid; one suspects there was something of a sigh of relief from the stodgier members of the management.  While this left Waterman free to make as many of the pens as it felt like, those pens were of a flimiser and less visually interesting material (even the ribbed ones).  The clear tail pieces adopted as a nod to the lost material were a bit of a mistake, since thicker clear bits of celluloid are more given to crumbling; an astonishingly high proportion of them has disintegrated.

The other great blow to the Hundred Year Pen (which began to be the “100 Year Pen” in Waterman adverts about the time of the materials change) was the decision by the trade regulators to clamp down on some of the more ridiculous claims in pen warranties.  How, for example, could a company which had only recently entered its second half-century claim to offer a warranty for twice that long?  Without a satisfactory answer to that question, Waterman brought the Hundred Year Pen in, and quietly changed its name.

Today, of course, we can see proof positive of the potential for century-surviving pens, and those early Lucite versions of this model might be thought of as the perfect candidate for longevity.  My own experience, with the latter and less entropy-resistant variation on the theme shows that the point, like most other pre-collapse North American Waterman products, was impeccable.

Update: There is documentation for gold and silver caps for the Hundred Year Pen, found in ads from 1943 and 1944.  It’s unclear if this was an option that was available right from the Lucite original, but if you find yourself with a pen claiming to be a Hundred Year and using a metal cap, you can accept the claim.

Cost When New: $8.50 and $10.00 versions were available (for modern value, try this calculator); small, medium and large, effectively, with the price change only for the last step.

This Hundred Year Pen is a Canadian-made smooth-bodied example, coming from very near the end of the time when the name was used.

Also late production, this is a smaller grooved version; this and the smooth were offered in the same catalogues, so there’s no getting a sense of dating from either. This is a rather remarkable example of preserved celluloid, little ambered and not at all crumbly. 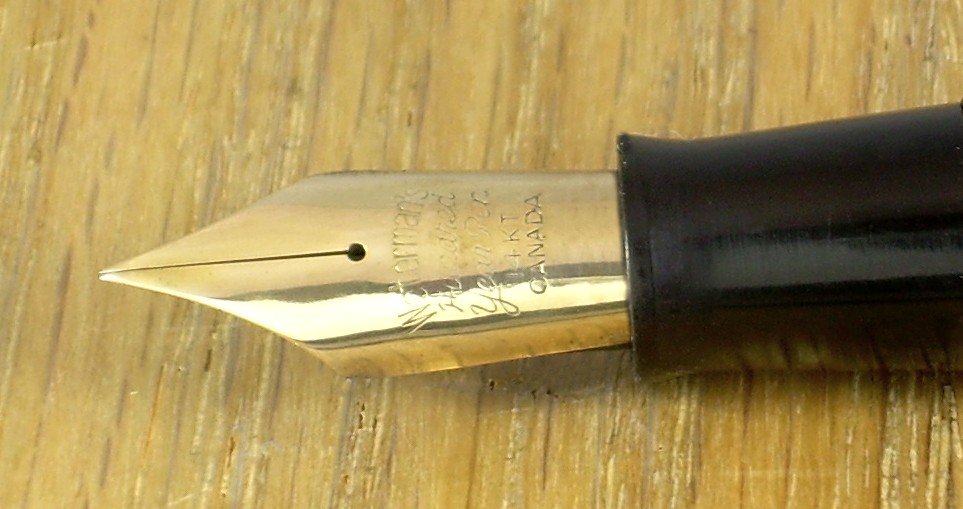 Permanent link to this article: http://dirck.delint.ca/beta/?page_id=5448