The “17” is a development of the UK Duofolds, something to stand at the lower end of the line-up.  The notion seems to have been to create something that would run in the same crowd as the 45 but have a fixed filler.  The first two years of the “17”s actually had open points, but they are generally found with a hooded point which makes them yet another Parker one might mistake for a “51”.

In the hooded models, the interior workings of are similar to those of the contemporary “51”, in a somewhat embryonic form; the works of the open-point models are relatively traditional.  The most notable internal absence is the collector, the vaned ink-handling gizmo that rendered the “51” a technological marvel (from a pen perspective– it doesn’t fly or emit death rays, after all) and which appears in some form in almost every Parker designed since 1950.  I’m frankly at something of a loss as to why the hooded “17” isn’t a dribbler of the most offensive sort, as the feed is little more than a stick with a hole in it, but none of the ones I’ve tried have been particularly handicapped in this direction.  The point is the other major difference between the “17” and its older sibling, being a very mere flat piece of metal.  The point tends to stand out from the hood more than it would in a “51”, which can allow for a surprising approach to flexibility, albeit not nearly so much as the open-point models can manage.

There were several variations of the “17”.  The base model of 17 can be very base indeed, with a steel point; a student’s pen if ever there was one.  There is also a “17” Super, with a broad gold band of the cap; this and the not-quite-completely base model were all one could get with an open point in the initial offering.  When the point became enclosed, a “17” Lady appeared; a very short variant, which I imagine would have been touted as convenient to store in a purse.  A late appearance in the lineup was the “17” Deluxe with a metal cap.  Two other pens in Parker’s lineup of the time, the Lady Insignia and Lady Standard, carried some parts of the “17” as well.

Cost When New: An advert from somewhere in the middle of the run shows the price for the Super as 55 shillings, the standard as 45 shillings, and the Lady as 27/6 (for modern value, try this calculator).

Early version of the Parker “17”, with exposed point. These were phased out about 1964.  This particular one proves that the early examples could have flexible points, too.

“17” Lady – a very delicate pen, in this case with an enormous broad point

“17” Super – the big gold band makes the difference.  The open-point pens in this trim revelled in the name ‘Parker “17” Super Duofold’.

I’m not sure if this double-jewel trim persisted throughout the run of the model; it was present in the early open-point versions, though, so it probably did.

“17” Deluxe, which the unkind may view as an example of lipstick on a pig 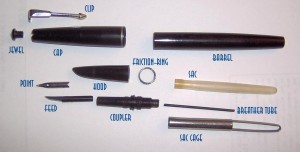 What lies within – check out that dead-simple feed

Permanent link to this article: http://dirck.delint.ca/beta/?page_id=51