With a lever-fill pen, you can tell you need a new sac if it’s at all difficult to lift the lever (and don’t try too hard– breaking the lever is extremely bad business) or if there’s any kind of crunchy or rattling noises from inside the pen.  A button-filler or pen one of the various things I call an indirect filler will have similar stiffness and/or noisemaking issues, and should likewise be treated gingerly.  As a reliminary to the exercise, one can remove the button from that type of filler, and should use whatever sort of locking device might appear on the crescent, hump, &ct.

The first thing to do is to pull the section free of the barrel, without harming the barrel.  Frequently this is not a big problem, as many sections are just simple friction-fits and it’s not much more of a challenge than uncorking a sparkling beverage to get it free.  The best action is to pull firmly away from the barrel, with a very little rocking motion to help “walk” the section out of place.  Sometimes it is necessary to soak the pen in very slightly soapy water, but don’t cover more than the section and the joint, and be careful with this; casein and hard rubber pens will respond poorly to immersion, and will be irrevocably damaged by long exposure.  Also, use only cool water as warm is more likely to do harm to both those materials and to celluloid.

How do you make a pen go “woof”? Expose it to open flame! This image is from a 1956 Parker repair manual.

Of course, if the section is fixed in place, the adhesive (usually shellac or a rosin-based sealant) is released by judiciously applied heat.  Dry heat is usually indicated, an adjustable heat gun being ideal, a hair-dryer being acceptable, and the old approach of an open alcohol flame being terrifying.  Whatever is used, my personal mantra is “too hot for my fingers is too hot for the pen,” and I’ve yet to meet with either failure or conflagration.  Sometimes, when the section is very badly stuck, repeated cycles of cool and heat are needed; in that case, make the attempt at removal when the barrel is warm, as it is more pliable and less likely to shatter, regardless of what it’s made of.

Some firmly stuck sections may need a set of special pliers to get them loose, although a lot of pen fanciers view these as a last resort, due to the danger of applying too much pressure and smashing the section to powder.  Even if it remains in large, non-powdery fragments, it doesn’t leave much of a useful pen.  Caution! 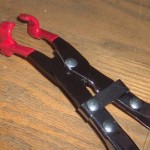 Once the section is free, if fate is kind the mummified sac will drop out easily.  It may be stuck to the inside of the pen by the last of the ink it had in it, or rust, or other informal adhesives.  It is well to get this all out, as it both takes up space in the pen (reducing space for ink) and generally has nasty sharp edges (not good for a new sac).  These have to be worked free with tools that won’t scrape up the inside of the barrel, and I usually resort to bamboo skewers; one can whittle the end into all sorts of useful shapes.

It does occasionally happen that instead of a petrified sac one finds a mass of goop, most usually when an energetic but misguided person has used some incorrect materials in an attempted repair.  The remedy is the same, but will take a lot more effort to clear out the mess, and you may find your have to resort to a q-tip and lighter fluid to dissolve and remove the mess; the fluid evaporates fast enough to not endanger the pen (best avoid it with hard rubber, though), but don’t go too mad using it.  Apply it to the swab, not the pen.

There will usually be some chunks of sac stuck to the inner end of the section, which is called the nipple (younger readers may take a moment to giggle).  These need to be cleaned off to provide the new sac a good surface to stick to.  When possible, I stick to my own thumb-nail as a tool for clearing these bits off as a way of avoiding damage, but sometimes a small knife is required.  If so, work from the joint-end of the nipple.  Some also suggest a flat file as means of cleaning off the nipple.  However you approach it, make sure the material removed is old sac and not nipple.Once things are cleaned out, you need to get a new sac of the appropriate size.  If several are on hand, you can just guess at it by sliding several in to see which has the best diameter.  There is a fairly comprehensive chart on this site.  Don’t worry about the slightly esoteric numbers, as anyone you might order the parts from will have them sorted by the same system.

With lever-fillers, the pressure bar should be inspected, but if at all possible leave it in the barrel; a little light down the opening and a quick working of the lever should show if there’s any problems requiring removal.  Button fillers will routinely drop their guts at about this point in the process, and in fact should have them taken out anyway as the replacement of the section calls for it.  The other styles of sac-based fillers should also be given a visual inspection , but they’re so simple that there is almost never any need to remove the pressure bar (so don’t, and save some headaches getting it back in). 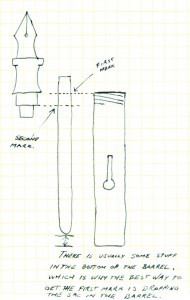 The sac also needs to be the right length, roughly the same length as the inside of the barrel.  My usual way of checking on this is to slide the sac into the barrel, and mark the point where it emerges.  Then I lay it beside the section, with that mark at the section’s joint line, and make a second mark at the pointward side of the nipple.  Use a sharp knife or scissors to cut the sac off at that second mark, and if going to one side of the line or the other, aim for a slightly short sac; too long and the sac will crumple when installed, and won’t fill properly.

The sac is stuck to the nipple with orange shellac.  I actually ordered mine in as part of a load of different supplies from a pen-part specialist, but one can get the right stuff at a woodwork supplier’s, where the smallest quantity available will be about a seventy-year supply for this purpose (which is a bit of a shame, because it doesn’t last that long).  Do not, by the way, think, “Oh, that sac’s on plenty tight.  I don’t need to stick it down.”  Plenty tight is not an equivalent to water tight, and without the latter you’ll get ink in your pocket if you manage to get it in the pen at all.

Consider, as looking at this image, the actual diameter of a pen

Whichever adhesive is chosen, be cautious in application so as to not get any into the space above the feed– if ink, which is supposed to be there, can clog a feed, imagine the trouble any kind of stickum can cause.

Once the sac is in place, leave it alone to set for at least a half-hour (overnight is ideal).  Before I go on I usually dip the point of the pen in water and give the sac a squeeze, just to make sure it’s taking in fluid and keeping it in place.  A little bit of talcum or graphite powder is usually applied to the outside of the sac to make sure everything moves together freely.  Graphite is messy but easy to find at hardware and automotive stores, as it’s used as a lock lubricant.  Talc is emphatically not available on the shelves in drugstores; some can provide it if you ask the druggist for pure talc, but most will only be able to offer some variant on baby powder which is bad medicine for a pen.  It may be available at billiards suppliers (who will more likely offer it in a block), and can certainly be found at the specialist pen suppliers.  Talc is the traditional preference, as it’s easier to clean up excesses.

After powdering the sac, return the section to the barrel.  Any mechanisms removed will also have to go back in, of course, although in the case of the button filler one has to wait .  Most pen-makers tried to align the lever with the top of the nib;  it’s entirely optional, and in the case of pens with threaded sections may be impossible (as is the case here).  If the section resists returning to the barrel, warm the barrel again as was done to extract it to avoid breakage.

Permanent link to this article: http://dirck.delint.ca/beta/?page_id=27