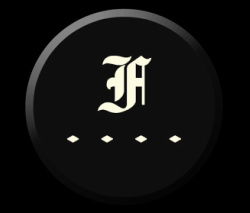 I am a little hesitant to start on the history of Franklin-Christoph, because it is at once long and brief.  The hesitation is compounded by the fact that for most of its history, the company was not even involved in writing instruments; I have, or course, delved back far into a couple of pencil-makers who turned to pens only after some centuries in operation, but this is a little different.  The Franklin Company, from its establishment in 1901, was primarily interested in the making and importation of ceramics.  This company passed from father to son through four generations, picking up the interesting calligraphic trade-mark during the third Franklin’s tenure.  In the 1990s, they dropped out of ceramics, to pursue “fine accessories”, and in most cases that would have been the tolling of the funeral bell for the company.

However, in this instance, the fourth and fifth generations of the family, working in concert, seem to have taken the rather ill-defined notion of fine accessories and focussed upon a particular aspect; writing instruments and related accoutrements.  As millennium was turning over, the Franklin Company became Franklin-Christoph, maker of pens, with the hyphenation added in an effort to avoid being connected with a previous and long-defunct pen company which also used the name Franklin.  This reinvention included a retail wing called Pen City, which has since been divested.  Production began in 2001, and the line now includes eleven different models of fountain pen, along with some of those other sorts of pen I’m not so interested in.

The company’s stated design philosophy is one of “austere simplicity.”  This could lead to some rather boring pens, but in practice has producing an interesting blend which one might almost call avant-retro; the general silhouettes of the pens are traditional, but the materials and details are quite modern and frequently rather striking.  The avowed aim of the philosophy is to avoid faddish design, and apart from a possible accusation of following a current trend towards traditional shapes they seem well set to realize that goal.  They also declare an intent to engage their customers which, to the amateur pen historian at least, sounds like the better practices of the pen-making giants of old.  In this regard, they seem a somewhat quieter and slightly more elegant form of the kind of post-revival fountain pen company that TWSBI embodies in a somewhat more arm-waving mode.

In addition to the pens under their own name, Franklin-Christoph produces leather accessories which are mainly but not entirely pen-related, and they also own Piper Pens, a name under which they make pens of a different “family resemblance” and refills.  Those refills, when one considers the rollerball type, have the four lozenges of Franklin-Christoph as part of their imprint, underlining in a somewhat literal way the source from which Piper comes.

Permanent link to this article: http://dirck.delint.ca/beta/?page_id=6184