Maker: Sheaffer.  For general comments on the mechanism, jump back to the Snorkel page.

The Thin Model pens had been around for a couple of years before the introduction of the Snorkel versions, and there is almost no telling them apart from a small distance or with the caps on. Snorkel versions are very slighly longer to accomodate the mechanism, but in all other aspects the only give-away is the glimpse of the filler probe itself, lurking in the middle of the feed. As with the previous Touchdown versions, the shape of the body appears to have been a response to the Jet Age and its calls for sleekness.

Continuing a habit begun with in the Triumph era, Sheaffer made a lot of different “models” out of very small changes in trim and fittings.  The TM Snorkels were highly modular items, with easily swapped points and caps, and it is the re-combination of these that gave the appearance of a vast number of lines.  Unlike the Esterbrook Re-New Point plan, Sheaffer’s use of this modularity was kept in house; users were not encouraged to go poking around in the works of these pens any more than modern consumers are meant to rummage the guts of an MP3 player.  As with the previous lines, this approach to different models means that in most of their dimensions are exactly the same, making an examination of the line rather less labour-intensive for me than was that for the Balances.  The possible choices lie in the material (palladium-silver alloy or gold) and shape (traditional or Triumph) of the point, and in the material of the cap.

There is no accurate way to date these pens to a specific point in the model run.  It may be said that those with a gold snorkel are early, but that is a very fuzzy distinction.  Since there isn’t any particular cachet to “early” or “late”, it’s not a distinction which particularly matters, either.  Similarly, later examples will appear with a section matching the colour of the barrel.

The external slimness of the styling combined with the internal complexity of the filler to seriously limit the ink capacity of this line.  Whether this was considered at the time a great drawback does not appear, but I don’t suspect it was.  People were used to the notion of regular refilling, after all, and a desk model I use in my regular employment has never run dry on a once-a-week filling regimen.

The Thin Model was swept out of Sheaffer’s line-up, more or less, by the introduction of the PFM.  “More or less” because the body shape, if not the name, continued to appear in various Skripsert and lesser cartridge pens for some years to come.

Cost When New: See individual models below.  Prices went up slightly mid-way through the run; I’ve used the 1955 catalogue’s prices (which is my most extensive price list for this era), and as the increase was mainly to address inflation it means that the modern equivalent (for which, try this calculator) remains more or less stable throughout.

Models in ascending order of cost:

Sheaffer Special (if opened in separate windows, this is actually to scale with the others)

Sheaffer Admiral – note that the “Feathertouch” point is gone with the transition from the TD version.

The colour-matched section appeared in later production, in all models. The fact that it’s shown up in an Admiral indicates that it wasn’t something to get too excited about.

Sheaffer Saratoga; very similar to the Admiral, but with a big two-tone point. Which makes it more like previous Admirals.

Sheaffer Sovereign; the pattern of lines on the cap is groups of three, the central one having a sawtooth motif.

Sheaffer Clipper, in burgundy and with the later colour-matched section.  The impressed lines on the cap are the same as on the Sentinel, and they’re easier to see in that picture.

A Clipper set in pastel blue; rather than the more usual pencil, the pen is accompanied by the retractable ballpoint (which gets no white dot). One wonders if there was ever a presentation box that didn’t say “new SNORKEL pen” because this is a fairly late set.

Sheaffer Valiant, pastel blue – yes, there is something wrong with its dot.  When I got it, there was something just about as wrong with the point; I’m rather proud of what I managed in that regard.

Sheaffer Sentinel, Peacock Blue. The colour reproduction is not precise in either this or the Pastel above, but you get a good sense of the difference between the two colours.

Sentinel in sage green– not to be mistaken for the rarer fern green which inclines more to yellow than blue.

Desk Models:  There were three, the 5SKD which used the open 14k gold point, the 74SKD which mounted the two-toned open 14k point and the 121SKD which used the masked 14k triumph point.  The cost depended upon which base they were mounted in, but it was never low.  Colours were limited to black and brown, and of course the blind cap is specifically shaped to these models.

Sheaffer 121SKD – note that the white dot lives on the tail, having no cap to go to

Sheaffer 74SKD, which doesn’t have to worry about a white dot.

Sheaffer 5SKD, which also has no dot to flaunt.  This image does show the tail-vent necessary for Sheaffer’s pneumatic filling system, though. 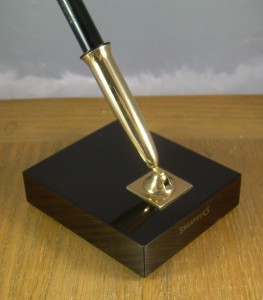 The basic “jet” glass base for the Snorkel line 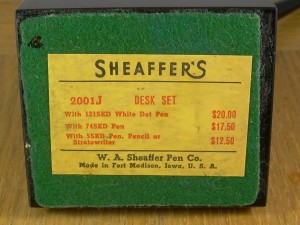 Note that this is one of the cheapest desk bases; a fellow could spend a lot of money on a good desk set.

Permanent link to this article: http://dirck.delint.ca/beta/?page_id=403